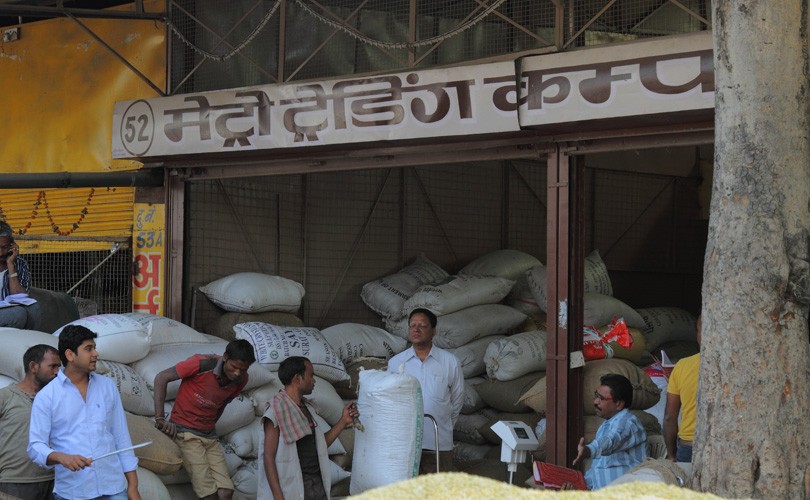 Vivian Fernandes reports on a mandi in Udaipur where forest produce is traded. Tribals not only get value for produce that went unharvested, they also have a stake in conserving forest resources.

By including 26 items of minor forest produce in the list of commodities that can be bought and sold in regulated mandis and by abolishing transit permits for transporting and trading in them, the Rajasthan government has  not only provided the state’s tribal people a source of livelihood but may have also given them a reason to conserve forest resources.

Bhagwan Sahay Jatwa, Secretary of the Udaipur regulated mandi cannot stop gushing about the good that has been done to tribals by the state government’s October 2015 order. By itself the order including minor forest produce in the list of mandi-tradable commodities would have meant little. Of greater consequence was the decision to abolish transit permits. Jatwa says the fee for the permit is a mere rupee. He claims only three have been issued in the state since independence.

Obtaining the permits was a production in itself. When the tribal or adivasi wanted to take produce like mahua, neem berries or safed musli (Chlorophytum borivilianum) out of the forest, they would have to inform the ranger who would send a guard to the location for physical verification. On the basis of his report, the district forest officer who would issue the permit.

Anyone caught moving forest produce without a permit could be jailed for six months. The “contraband” would be confiscated and the violator would be liable to a penalty equal to 10 times the value of the seized stuff and the vehicle it was being transported in, Jatwa said.

The Udaipur market committee was also under instructions from the forest department to immediately inform it if minor forest produce was detected in the mandi premises.

The Indian Forest Act of 1927 and the transit permits thus criminalized the livelihood activities of the tribals and disentitled them to produce which their habitat bestows on them. But the state claimed ownership and gave the right to procure and sell forest produce to contractors. Jatwa showed one such contract, given to one P K Traders in 2012, for the jungles of Saira gram panchayat in Udaipur’s Gogunda tehsil for an annual fee of Rs 12,000. Adivasis were bound by the contract to sell only to the contractor. Minimum rates for produce were not fixed; the contractor was under no obligation to buy, Jatwa said.

White Muesli, said to be a sex stimulant. Photo by Vivian Fernandes

That the tribals suffered a huge loss of income because of restrictive laws and policies can be gauged from the Udaipur mandi’s turnover of Rs 189 cr from minor forest produce in the two financial years ending in March 2017.  More stuff has started arriving in the markets because transit permits are not needed, said Chandan Swagat, President of the mandi traders association. The price of mahua fruit (Indian butter tree or Madhuca Indica) has declined from Rs 45 a kg last year to Rs 24 this year because of high production owing to favourable weather, Swagat said. The availability of a trading platform and the resulting competition has resulted in higher prices. The price of wild senna (cassia tora, called Puwad locally) rose from about Rs 2-3 a kg to Rs 65 a kg, traders said, but is now selling for Rs 10 a kg. Traders hoarded the seed which is in high demand from Korea, China and Vietnam to boost prices but the importers turned to Nigeria which undercut the Indian suppliers. Basanti Lal, a trader, said Gujarat Narmada Fertilizer Corporation (GNFC) wanted a supply of 5,000 tonnes of nimboli or the berries of the Neem tree, for neem-coated urea. The berry was trading at Rs 15 a kg, he said, many times more than the price it once fetched.   There was also good demand for jangli amla or wild gooseberry, which traders claimed had higher medicinal properties than cultivated ones.  They said it was selling for Rs 90 a kg. The modal price in Delhi market for cultivated amla  was Rs 15-16.25 a kg in November.

The mandi does not allow commission to be charged of the sellers. From buyers the commission agents can charge 2 percent of the value as their fee. Sellers are also required to pay an additional mandi tax of 1.6  percent. The mandi provides meals to farmers at Rs 5.  If farmers, tribal or non-tribal, die of snakebites, or due to accidents while commuting to or from the market, their family is given Rs 2 lakh in compensation. In the past three years, the mandi has paid Rs 3.80 cr as death relief, Jatwa said.

A new trading yard has been setup. Allotments of the 71 shops will be done next month. A fifth of the have been reserved for tribal farmers. Four will be given to national-level exporters and four to processing industries. The forest department and the state and national tribal cooperative federations will get one shop each. Incumbent traders want multiple shops for themselves and their kin. The mandi says it does not want a few families to corner the licenses. This has bred resentment, which was quite palpable.

Despite the easing of laws and policies, tribal farmers may not be getting the benefits they should. There were complaints about police and forest officials insisting on transit permits and extorting money. Transit permits for minor forest produce have not been entirely done away with; they are still required in non-tribal sub-plan areas.  Awareness among the tribals is also low. Jatwa said it was not uncommon to find them arriving early in the morning at the mandi, much before it opens for trading, to avoid encounters with officials on the way.  (Incidentally, I did not see any tribal at the mandi). These are niggling issues that need to the resolved, but the state’s initiative, in itself, is laudable. Instead of the tribals coming to the mandi, perhaps it should go to them. Setting up market sub-yards closer to them might help.

(This report was first published in the Financial Express).

Top photo of a shop in the Udaipur mandi trading, among other things, in minor forest produce.  By Vivian Fernandes).