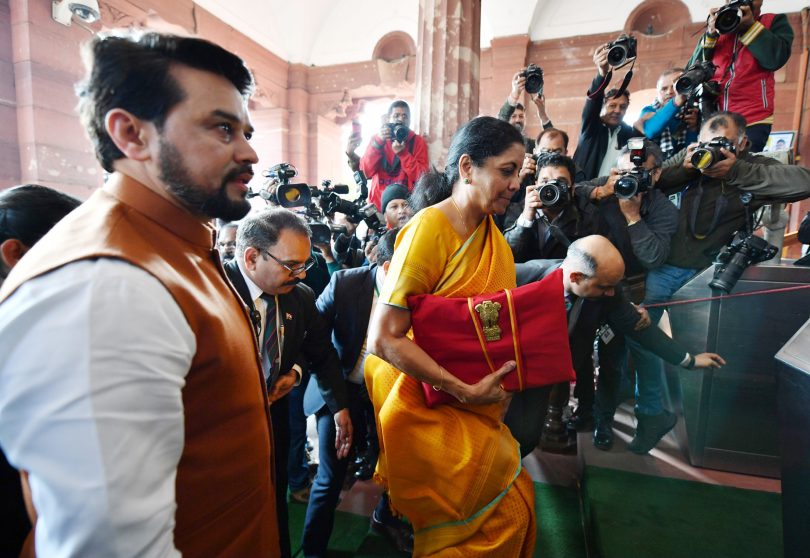 Government spending on the agriculture sector in this financial year was 2.2 times more than that in the previous year. This was very substantially on account of the income support of Rs 6,000 a year to each of about 14 crore farmers, excluding those in the high-income bracket. Spending on PM-KISAN, launched ahead of the Lok Sabha elections, at Rs 54,370 cr was more than the entire agriculture ministry’s outlay in 2018-19.  The actual spending on the scheme has fallen short of the budgeted outlay by Rs 20,630 cr.  This has impacted the revised estimates which are Rs 28,581 cr less than the budget estimates.

Despite talk of making agriculture sustainable and doubling farmers’ income, this year’s expenditure on centrally-sponsored schemes was 14 percent less than last year’s. Spending on the promotion of drip irrigation was 30 percent less, that on improving soil health was half, and on Rashtriya Krishi Vigyan Yojana (RKVY), a 2007 scheme to encourage states to invest in agriculture, was down by 28 percent.

Next year’s budgeted outlay is 32 percent higher than the revised estimates but just three percent more than the budget estimate of this year. The income support scheme gets 38 percent more. The other schemes of the central government get a 25 percent raised outlay.

The outgo on account of crop insurance premium was Rs 1,703 cr more than last year. This is a scheme that has benefitted farmers.  NITI Aayog member Ramesh Chand says 71 percent of the premium paid in 2016-17 came back to farmers as compensation for damaged crops. A fourth of the farmers benefitted that year. In 2016-18, the share was 81 percent and a third of the farmers gained. While farmers who take bank loans are compulsorily covered, a heartening feature of the scheme is the increase in the share of non-loanee farmers. But coverage in terms of value – just 11 percent – is a concern. The crop insurance scheme needs some tweaks: farmers should not be forced to buy it, even if they are bank borrowers. The reliance on crop cutting experiments (CCEs) continues, instead of on technology like satellites, drones and smartphones for timely, objective and accurate assessment of crop damage.  About 50 districts get half the insurance compensation raising the possibility of farmers there gaming the system.

The Finance Minister has rightly emphasized the shift from cereal crops to livestock rearing, fisheries and horticulture for improving farmers’ incomes. Fruits and vegetables are four to ten times more profitable than cereals, pulses and oilseeds, Chand says in a paper. Bringing more area under horticulture – currently around 10 percent – will raise agricultural GDP growth. A one percent shift in area from cereals to horticultural crops adds 0.46 percentage point to the agricultural growth rate.  Demand is shifting to fruits and vegetables with rising incomes. A one percent increase in annual individual income results in a 1.9 percent and 1.02 percent increase in demand for fruits and vegetables respectively, Chand says.

Horticultural crops particularly vegetables are suitable for smallholders who have family labour. They can also better manage the farms. But they are not able to sell their produce profitably. Contract farming by companies or cooperatives can allow smallholder farmers to focus on the production function, with the assurance of purchase at pre-fixed prices. This can happen when there are no restrictions on sale.

The Finance Minister says states will be encouraged to enact the model contract farming law and the new agricultural produce and livestock marketing act.  One can only wish her luck. The centre drafted a model agricultural produce marketing act in 2003 but adoption and implementation by states were patchy. Those that did enact it did not notify the rules and where notifications were issued only a fraction of the produce was covered. The traders and the commission agents at the regulated mandis are either politicians or political donors and they are not willing to allow more competition.

The finance minister has set a target of doubling milk processing capacity by 2025. She says there is a need to remove distortions in the livestock markets. But this government has itself created the distortions for ideological reasons. India’s milk productivity is low, which is why the domestic prices of milk powder are almost double the international rates. Unless unproductive animals are culled, productivity cannot increase.  But cow vigilantes have put the lives of cattle traders at risk. States like Uttar Pradesh have closed down municipal slaughterhouses because they don’t comply with pollution control laws.

Enactment of the model land leasing act is also needed so that smallholdings can be consolidated. It will also help tenant cultivators get subsidies that currently go to owners who do not actually cultivate.  Leasing is on the rise. A national sample survey showed that 59 percent of the cultivated area in Andhra Pradesh, 30 percent in Bihar and 20 percent in Odisha were under lease in 2012-13. These are oral as owners fear losing the land if they are recorded. But schemes like PM-KISAN that give income support to farm owners have created entrenched interests that will resist to easier leasing laws.

Unless the three model laws are enacted, investment in the agriculture sector will be strained. About 78 percent of the investment in agriculture is made by farming households. The private corporate sector invests just 2.5 percent. The rest is made by the government. It cannot increase its share unless it shifts from input subsidies to income support. It cannot do both and also invest. But private corporate investment will not come in if the laws governing the purchase and marketing of produce are restrictive.