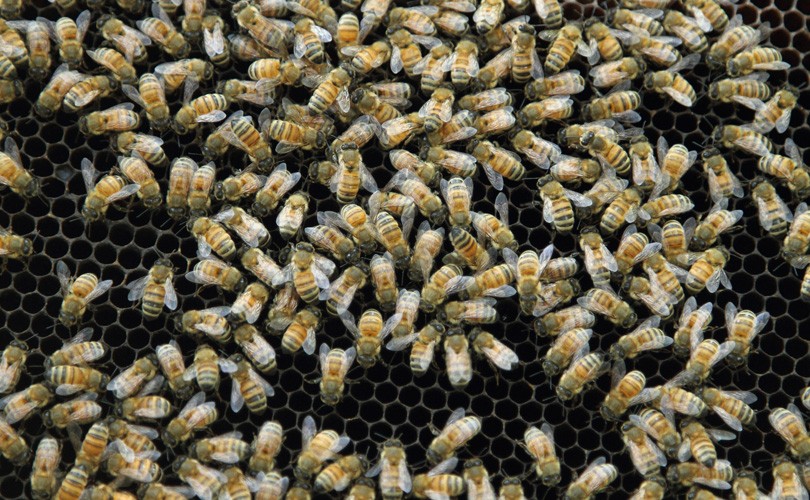 R K Thakur has told bee exporters who met him to respect the science of bio-technology and not blindly oppose. He was guarded in his response to Vivian Fernandes. While a summary of the bio-safety dossier, prepared by a committee of the regulatory authority says there is unlikely to be any impact, Thakur says he will do an evaluation once GE mustard hybrid, DMH-11, is released for mass cultivation. Incidentally, trials in Tamil Nadu on GE cotton, showed that bee broods thrived in GE cotton fields because of low insecticide usage.

This is that time of the year when migratory bee keepers bring their colonies down from apple orchards in the hills and mango and litchi gardens in the plains to the mustard fields of Haryana and Rajasthan.  The summer heat of the plains and predatory attacks from wasps in the hills would have attenuated bee numbers.  Pollen and nectar from mustard blooms will build up the colonies and provide enough foraging force for nectar collection. After the mustard is harvested, the migratory bee keepers will move from Mahendragarh, Jind, Kota and Bharatpur to Punjab where they will collect honey from  burseem fodder plants and eucalyptus trees. This quest for bee flora is an annual ritual.

Bee keepers are worried that an important source of honey ─ mustard ─ will dry up. They are being fed scare stories by activists opposed to genetically-engineered (GE) mustard which is awaiting regulatory approval. They have held dharnas and participated in protests at Jantar Mantar in Delhi.  Their anxiety has also reached R K Thakur, coordinator for Indian Council of Agricultural Research’s All India Coordinated Research Project on Honey Bees & Pollinators in Delhi.

“I have to protect the pollinators. That’s why I am here,” Thakur asserts. He will make an evaluation of GE mustard’s impact on pollinators once it is approved for commercial use. His position differs from the stand of the activists who want a ban on a presumption of adverse impact. Thakur does not want to extrapolate the experience of Canada, where GE rapeseed, a related species, was approved for cultivation in 1996 and no harm to honey bees has been reported. Canadian species and environmental conditions may not be comparable, he says.

Thakur has told honey exporters to “respect” the Delhi University scientists who have developed the GE mustard hybrid DMH-11. He acknowledges that their work has to be taken seriously as they have been engaged in improving Indian mustard for the past three decades. “We cannot say, ‘No, no it cannot happen’ by shouting slogans and politicking. We should respect the science. Where our concern is we must definitely have trials once the seeds are available.”

The developers of GE mustard have made available to the Genetic Engineering Appraisal Committee (GEAC), the agri-biotechnology regulator, a 3,285 page dossier on the bio-safety assessment results of the hybrid. A condensed version was  prepared by its sub-committee and placed on the regulator’s website for public comments till 5 October.   It says “…[E]xposure of honey bees to barnase and barstar proteins is highly unlikely and therefore risk to honey bee population due to cultivation of DMH 11 hybrid is considered negligible.”

The barnase-barstar system is a versatile and efficient system for hybridization.  According to the developers, the evaluation studies show that there is no difference between their mustard hybrid and non-GE ones’s except for three transgenes that have been inserted from soil bacteria. Of these, barnase is present only in the anthers of the female (or males sterile) line and the hybrid, and that too in the tapetum or the tissue which feeds developing pollen.  Barstar is present in miniscule quantities in all tissues of the male parent and the hybrid, but not in their seeds. The bar gene, which confers tolerance to a herbicide, and used as a marker for selecting GE hybrids from non-GE ones, is present in both parents and the hybrid in all their tissues.

The developers say the nectaries of GE mustard were fully developed and they were found to be full of pollen during bio-safety level I and level II field trials. Bees made no distinction between flowers of the GE mustard hybrid and non-GE ones and visited both.

The only GE crop approved for mass cultivation is cotton. It contains the Bt protein derived from a soil bacterium. It is toxic to bollworms. The transgenes, barnase and barstar,  used in GE mustard are different. They are not for crop protection but to create versatile hybrids of high purity for yield improvement.

Trials at Tamil Nadu Agriculture University (TNAU) in the winter of 2014 showed that bees thrived in Bt cotton fields.  Insects play a vital role in the pollination of cotton. It was observed that honey bee colonies built up considerably during the flowering period. Populous colonies of about 60,000 bees are required for viable honey production.  The life of a flower is up to 72 hours. Of this, the first 48 are the most productive for nectar secretion. A large foraging force will result in higher nectar collection.  Broods will grow faster if there is enough nectar to provide energy and pollen for protein.

TNAU researchers observed that the brood area of honey bees was bigger in non-Bt fields in October but the situation reversed in the subsequent two months.  Overall, during a three-month period, it was found that brood area in Bt fields was 948 square cm. This was 114 square cm more than in non-Bt fields, indicating that the pesticide-free environment of Bt cotton was conducive for honeybee growth.

Both cotton and mustard are good sources of nectar for bees. For commercial production of honey a colony must produce 40 to 60 kg of honey per year. Bee keeping can profitably engage a large number of people.  Besides creating income, pollination is very essential for yield improvement and quality enhancement.  Apple growers have been persuaded about the benefits of bee pollination, says Thakur. Through managed pollination ─ the use of pollen diffusers or devices with hand-collected pollen though which bees are made to pass ─ fruit quality improves. All the five apple lobes get fully developed. The fruit is well-formed and acquires a nice colour. Growers pay more than Rs 1,000 per colony, per season.

It has been estimated that bee pollination can increase the production of almond, guava, litchi, and amla by 20 percent, that of apples by 24-40 percent, of peaches and pears by 50 percent, bananas by 63 percent and mangoes by 68 percent.   The number of bee colonies recommended per hectare ranges from four for apple and pear, to five for watermelons and eight for straw berries. Oilseeds sunflower, safflower, rapeseed and niger depend entirely on honey bees for pollination. Ninety percent of the crops are cross pollinated and most of them depend on insects for the purpose.   The loss of bee habitat and increased use of pesticides is detrimental to the long-term sustainability of agriculture. Globally pollination is estimated to be worth $224 billion a year, says Thakur.

Vegetable cultivation in climate-controlled conditions is on the rise, but greenhouses deter pollination because honeybees shy away from confined spaces. Bumble bees are an alternative. Thakur has done pioneering work in the area. Unlike honeybees they are buzz pollinators. Their vibrations cause anthesis or the opening of anthers for pollen release in crops like tomato and capsicum. The rearing of stingless bees is another promising area. This activity is prevalent in Kerala and the North-east. Their honey sells for as much at Rs 3,000 a kg at the farm gate for medicinal reasons.

In the US, the president has made the survival and health of pollinators his concern.  In June, he announced a Pollinator Partnership Action Plan. “Pollinators are responsible for one in every three bites of food we take, with honey bees alone increasing our nation’s crop values by more than $15 billion each year,” the White House website says. Since many pollinators are in decline in the US and worldwide, President Barack Obama issued a presidential memorandum establishing the Pollinator Health Task Force in June 2014. Good can come out of the anti-GE mustard protests if the protection of pollinators becomes a national priority in India as well.

(Top photo: Captive bees reared by the All India Coordinated Research Project on Honey Bees & Pollinators, at  its head office in Delhi. Photo by Vivian Fernandes)