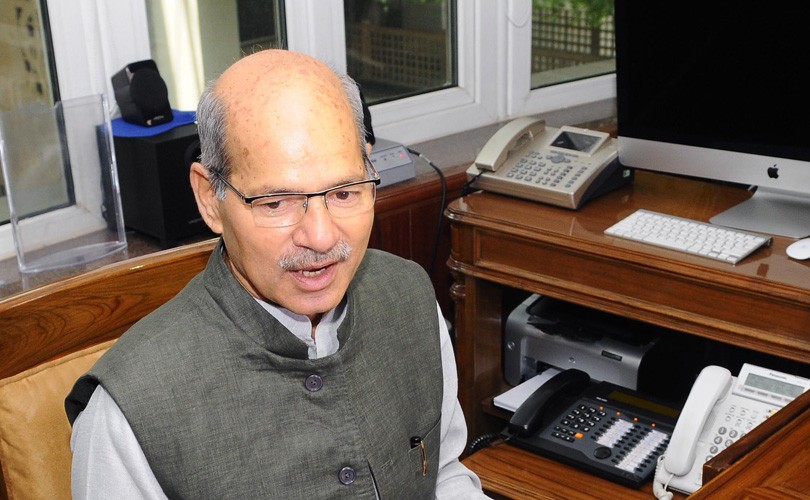 The new environment minister is steeped in RSS ideology and has a deep respect for things indigenous. He believes in organic produce and zero-budget natural farming. Vivian Fernandes inquires into his likely attitude to GM crops based on his speeches and Rajya Sabha questions.

The agri-biotechnology industry has reason to be anxious about the replacement of environment minister Prakash Javadekar with Anil Madhav Dave, a Rajya Sabha member from Madhya Pradesh, amateur pilot and River Narmada conservationist.

Dave is steeped in the ideology of the Rashtriya Swayamsevak Sangh (RSS). An M.Com from an Indore college, he has written books on climate change, the river Narmada, Shivaji, Chandra Shekhar Azad and ‘on traitors lurking in the house’ (‘Sambhal Ke Rahna Ghar Mein Chhupe hue Gaddaro Se’).

Of the four hundred questions he has asked in the Rajya Sabha since being elected to it in 2009, most pertain to conservation: climate change, rivers, groundwater, carbon credits, forests, bamboo and rainwater harvesting. A rather interesting one (Sept 2012) is about chemical castration of rapists to which the bachelor, who is 60 years old now,  is told that modern jurisprudence and Indian justice system believe in correction, not retribution.

Dave is a swadeshi. Among his earliest questions in the Rajya Sabha was one on improving the breed and population of Indian cows. Another was on the impact of plants and trees (eucalyptus) of foreign origin.  To a question on the promotion of foreign cows like Jersey and ‘Houston’ (Holstein Friesian), he was told that the government had a programme to improve the productivity of ‘nondescript’ indigenous cows by cross breeding them with ‘exotic’ breeds like Jersey and Holstein Friesian. As a result, 9.09 million crossbreds accounted for 21 percent of the country’s milk production while 28.3 million indigenous cows had a 20 percent share. But the milk of indigenous cows had higher fat content.

In a public speech he says he only eats fruits when abroad, so that he does not ingest  ‘gomaans’ (beef) even inadvertently.

The minister is keen on organic farming. In March 2016, he gave a speech in Indore extolling the virtues of zero-budget natural farming popularised by Padma Shri awardee Subhash Palekar. If the country’s agriculture has to change, zero-budget was the way to go, he said. Dave said he was doing organic farming on a part of his 2.5 acre-plot on the banks of the Narmada where he planned to build his retirement home.

Zero-budget farming involves the use of bio-dynamic preparations made with soil from the banyan tree buried in the ground in cow horns. They are supposed to be rich in beneficial microbes, but an ICAR (Indian Council of Agricultural Research) institute in Modipuram, which specializes in Indian farming systems, has questioned the claims.

Javadekar supported genetically-modified (GM) crops. He believed that the country would be doomed if it did not go with science. He had told this correspondent that he was keen to approve GM mustard developed by a team from Delhi University. Because of opposition from RSS outfits, perhaps he was biding time.

Given his interest in organic farming, conservation, tradition and indigenous cows, trees and plants, Dave seems like an unlikely supporter of GM crops, unless he gets the push from the Prime Minister.

But there is little to indicate he is an opponent. Unlike lawmakers who are sceptical of GM crops or worried about their risks, he has not asked such questions in the Rajya Sabha. The only one, in March 2012 was on promoting biotechnology ‘finishing schools’ to create a skilled workforce for the biotechnology industry and whether the government would set up a bioinformatics park. He was told that Karnataka had proposed a biotechnology finishing school in 2011 for providing one-year training to post-graduate science students to equip them for jobs and it was under consideration of the Department of Biotechnology.

Editor Ajoy Bose writes in www. thequint.com that RSS  has claimed the environment ministry for letting Smriti Irani go from HRD because of perception she is anti-Dalit.