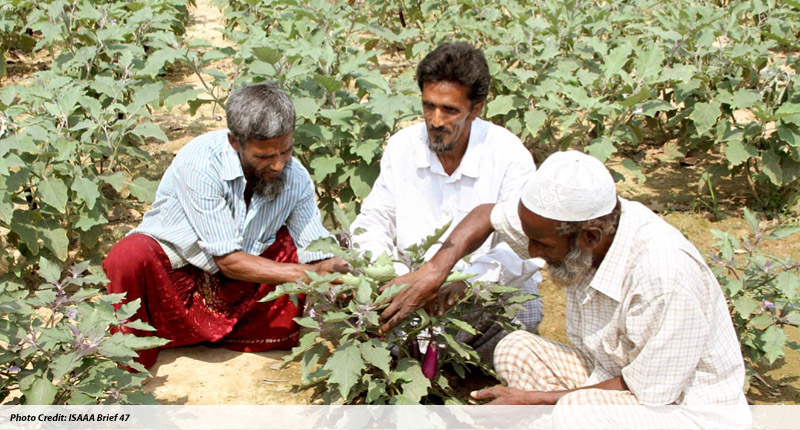 The GEAC has allowed Beej (or Bejo) Sheetal to do BRL-II bio-safety trials on Bt brinjal. But Vivian Fernandes is not optimistic about farmers getting access to the technology even if the tests show that Bt brinjal is safe to cultivate and consume. If GEAC was earnest it would have revoked the 2010 freeze on cultivation of Mahyco’s Bt brinjal hybrids.

The apex regulator of genetically-modified (GM) crops has permitted a Jalna, Maharashtra-based seed company to do confined bio-safety trials on borer-resistant brinjal. At its first of two meetings so far this year, in May, the Genetic Engineering Appraisal Committee (GEAC) permitted Beej Sheetal Research Pvt Ltd to conduct the trials on two of its hybrids – Janak and BSS 793- in eight states: Madhya Pradesh, Karnataka, Bihar, Chhattisgarh, Jharkhand, Tamil Nadu, Odisha and West Bengal. The minutes of the meeting were published recently.

The move has gladdened the agri-biotechnology industry.  “This is a step in the right direction,” said Ram Kaundinya, Director-General of the Federation of Seed Industry of India, which represents agri-biotech companies that broke away from the National Seed Association of India in 2016 over the issues of patenting of plant traits. “This is a technology developed by IARI (Indian Agricultural Research Institute). An Indian company like Beej Sheetal has made the regulatory application,” Kaundinya added, strumming the swadeshi and atmanirbhar chords.

But the time for distributing motichur laddoos may not be just yet.  Both the centre and the states have strong ideological positions on GM crops, particularly edible ones. Their no-objection is needed for the trials to be conducted.  Bihar’s Chief Minister Nitish Kumar, for instance, is unlikely to permit the trials. Even before GEAC approved and recommended GM mustard for commercial cultivation in May 2017, Kumar had written to the Prime Minister to over-rule a technical sub-committee of GEAC which had declared GM mustard safe for large-scale cultivation. He had termed genetic engineering as a “hazardous” technology. The state had not permitted trials of Bt brinjal is 2009 on the advice of farmers and the state farmers’ commission, he said.

Given the strong influence of the RSS on the Karnataka government, it is doubtful whether it will allow the trials to be done. The RSS affiliate Swadeshi Jagran Manch is vehemently opposed to GE crops.  In the previous Congress government, agriculture minister Krishna Byre Gowda has shifted his position from non-committal to support for GE crops.  NOCs from MP and Jharkhand also look iffy.

Leaders like Kumar are wrong in asserting that farmers don’t want GE technology. Early last year, a farmer in Haryana’s Fatehabad district was found to be growing Bt brinjal illegally. The farmer said he was unaware that it was genetically-modified, not approved for cultivation and therefore illegal. He said he had bought the saplings for a high price and had got a good, healthy crop. He had consumed the vegetable himself. It did not do him any harm not did he get any complaints.  The farmer was ordered to uproot and burn the crop, after an anti-GM activist tipped the government.

GM technology is especially recommended for Bt brinjal because once the fruit and shoot borer lodges in the fruit it is difficult to kill it with pesticides. But brinjal infused with the Bt toxin derived from a soil bacterium can kill it as the borer’s intestine have receptors for it, unlike humans.

The government’s emphasis on ease of doing business does not seem to apply to agricultural biotechnology. The regulatory process is dilatory and wears the applicants down. Beej Sheetal had conducted the Phase I bio-safety research trials at Jalna, Guntur and Varanasi in 2009 and 2010. The Phase II trials happened six years later in 2016-17 in Maharashtra, Punjab, Gujarat, Haryana, Uttar Pradesh, Delhi and Andhra Pradesh. The trials will be repeated now in another set of eight states.

Even if Beej Sheetal’s GM brinjal hybrids are declared safe in the trials, approval for commercial cultivation is not guaranteed. The ultimate decision rests on the environment minister who may give more weight to political considerations than to scientific evidence.

In 2009, Mahyco, a Jalna-based seed pioneer, got GEAC approval for commercial release of Bt brinjal. But the following year, environment minister Jairam Ramesh froze the GEAC’s decision. He also changed the mandate of GEAC from approval to appraisal. He made state no-objection for field trials mandatory, raising the degree of difficulty.

In the previous government of Prime Minister Narendra Modi, environment minister Harsh Vardhan emulated Ramesh. He did not act on GEAC’s 2017 recommendation to allow the cultivation of GM mustard despite the GEAC reiterating its decision and the National Academy of Agricultural Scientists passing a resolution in support and writing to the Prime Minister.

Taking a cue from that GM mustard decision Mahyco re-applied to GEAC for permission to commercially release its Bt brinjal hybrids which has Monsanto’s (now part of Bayer CropScience) borer-resistant (Bt) trait.  It said Bangladesh had permitted the cultivation of its Bt brinjal varieties in October 2013 and there has been no adverse report. Bangladesh had relied on Indian bio-safety test results. Mahyco had shared the technology with Bangladesh Agricultural Research Institute (BARI) fr free.

GEAC’s Vice-chair Richa Sharma said in response to an email query:”No report has been given by IIHR to GEAC.” IIHR Director M R Dinesh said “GEAC has not made any request to ICAR-IIHR and ICAR-IIHR has not conducted any study on Bt brinjal from Bangladesh.” DARE Secretary Trilochan Mohapatra said: “We have written to the concerned authorities in Bangladesh and (are) yet to receive their response.”

Mahyco’s Chief Technology Officer Usha Barwale Zehr said: “Mahyco has written to GEAC a few times to revisit our application for commercial release.  The last letter was sent in June.  We have not yet received any response.”

So Beej Sheetal will do the trials, the GEAC may recommend the hybrids for commercial cultivation and the environment minister will keep the company guessing. The GM regulatory process is designed to confound agri-tech companies.