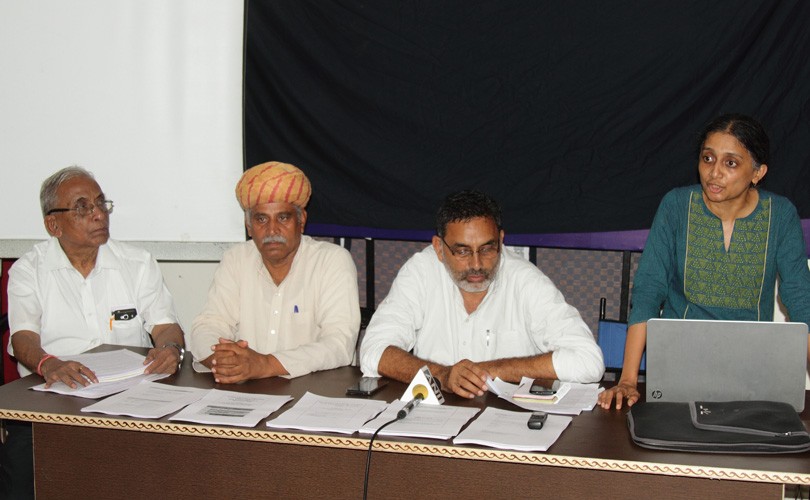 A GEAC member says the bio-safety of DMH-11 GM mustard has been assessed beyond doubt. Proof of hybrid vigour has been amply demonstrated. In which case, why should the GEAC give in to anti-GM activists? asks Vivian Fernandes. This piece was first published as a column in the Financial Express.

Last week Kavita Kuruganti and six other activists who call themselves grandly as the Coalition for GM-Free India, stormed out of a meeting with the Genetic Engineering Appraisal Commitee (GEAC), on being given 30 minutes to speak against the two hours they had demanded to trash DMH-11, a genetically-modified (GM) mustard hybrid developed with public money by geneticist and former Delhi University vice-chancellor, Deepak Pental and his team.

GEAC is the body that recommends approval of GM crops for cultivation after evaluating their risks to humans, animals and the environment. Kuruganti and her mates did speak for two hours ─ at a press conference later in the day.

Asking those blindly opposed to GM crops to speak to the GEAC is like the Vatican inviting worshippers of Antichrist. A dialogue is impossible. There are reports that the GEAC is giving in and might listen to the activists in the third week of July. Perhaps it wants to look correct and not be accused of being undemocratic.

It should be prepared to listen to a procession of rants. Kuruganti has little respect for the GEAC. She says it is ‘riddled with conflicts of interest.’ The research and testing of DMH-11, she says, ‘brings shame to the scientific establishment.’ The ‘testing protocols and data are unscientific and laughable.’  The observations are ‘unbelievable and untenable.’  The interpretation is ‘outright lies.’ 65

Pental and his colleagues have published more than 40 papers in international scientific journals on mustard alone. He holds patents in the United States and Canada for the technology he has put in DMH-11. Since returning to India in 1984 he has been engaged in (a) improving the yields of East European and  Indian oilseed mustard by developing productive hybrids; (b) developing double low or Canola quality mustards (low in glucosinolates, or components that give the seed its pungency, and low in erucic acid which in high doses can harm the heart); and (c) creating resistance in mustard to white rust, stem rot and alternaria blight. In 2004, his team developed mustard with oleic content equal to that of olive oil while retaining its Omega-3 fatty acid content ─ a double plus for the heart. At 65 tears, Pental’s ardour for research is undimmed. Scientists like him should be celebrated not vilified.

The same intemperate language, the same shrill cacophony was employed successfully by the activists in 2010 against Bt brinjal. Unlike his predecessor Jairam Ramesh, environment minister Prakash Javadekar supports GM crop technology. Prime Minister Manmohan Singh favoured GM technology but was let down by Ramesh. PM Modi should support Javadekar against swadeshi groups within the Sangh Parivar who provide oxygen to Kuruganti.

The activists say DMH-11 shines by contrast. They want it compared with a high-yielding variety called Kranti and not Varuna. But Varuna was the national benchmark for productivity until a couple of years ago. It is among the seeds favoured by farmers since release in 1975. Kranti is not fancied because it matures 4-5 days late, which exposes it longer to aphids or sucking pests.

This is borne out by indents for breeder seeds placed by states on the agriculture ministry. In the 25 years to 2011-12, 21 percent of the indented quantity was of Varuna. The share of Kranti was 3.8 percent. In the following five years, Varuna’s share was 16.5 percent, higher than Kranti’s by a wide margin.

The activists are wrong in claiming that DMH-11 has no yield advantage. It yielded on average 2,824 kg per hectare during three years of level one and level two bio-safety trials. The increase over Varuna was 28.41 percent and 38 percent over the zonal benchmark. In any case, the Barnase-Barstar gene technology used in DMH-11 to produce hybrid vigour can be incorporated in better mustard combinations, once it is approved. This has been the case with genetically-modified Bt cotton in India.

Another charge is that DMH-11’s seed size is small. Farmers do prefer big seeds.  Pusa Bold is popular. But big need not necessarily be better. Oil content is important. And yield is a function of output, by weight, not number of seeds,  per hectare.

Pental is accused of rigging data. His team was not involved in the trials, which were done under the guidance of Bharatpur’s Directorate of Rapeseed-Mustard Research, and even monitored by the Director-General of the India Council of Agricultural Research, S Ayyappan, who retired recently.

DMH-11 has also been genetically-modified to be tolerant to the herbicide glufosinate which is sold in India as Basta by Bayer, a German crop protection company.  The marker gene has been inserted so that genetically-transformed plants can be distinguished from untransformed ones. One of the activists declared at the press conference that glufosinate is banned in India but widely used illegally in tea gardens. He is wrong. Glufonsinate is allowed for use on cotton and in tea gardens. Farmers would welcome herbicide tolerance. NSSO surveys have shown that manual weeding is a significant item of cultivation cost. Labour is also not available when needed.

Kuruganti should ask herself why farmers are planting ‘thousands of hectares’ (as she put it) with herbicide tolerant Bt cotton, which has not been approved for cultivation. A Junagarh-based company is said to have initiated the sale of the pirated seeds. Officials are aware of the illegality but no action has been taken. New age herbicides are extensively used in rich countries.  By creating impediments in the release of tried and tested herbicide-tolerant plant seeds, activists are doing Indian farmers a disservice.

In a Whatsapp group chat last week, S R Rao, Adviser in the Department of Biotechnology and GEAC member said:’…safety has been assessed beyond doubt. Proof of concept for heterosis (hybrid vigour) is amply demonstrated. DMH-11 is not that bad. Some scientists removed from project (of National Dairy Development Board, which funded Pental’s research) are spreading stories with activists – the black sheep.’

This being the case, GEAC must put out a decision document telling the public why it intends to approve DMH-11 for commercial cultivation. The objectors, including the activists, can give written submissions to which GEAC must reply.  The activists are behaving like their livelihood depends on blocking GM mustard. Perhaps, it does. It is time to put them out of business.