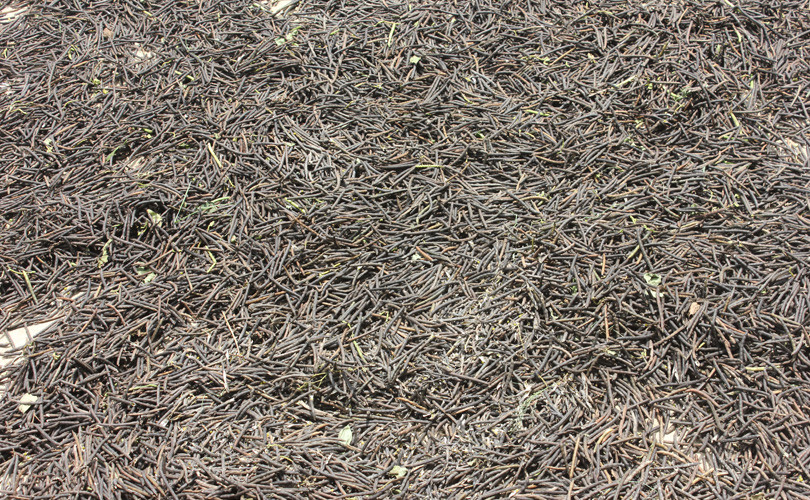 Pigeonpea (arhar) – and pulses – have seen the highest ever production in recent years. Chickpea (chana) output has doubled in the past ten years. Yet pigeonpea prices are at their highest ever. Vivian Fernandes explains why this is so. This report was first published in www.firstpost.com

The gap between demand and domestic production which has stoked inflation in pulses also reflects the distance to be bridged between their potential and realized yield, owing to inadequacy of outreach to farmers and their unwillingness to adopt prescribed agronomic practices.  Government policies which privilege rice and wheat over pulses and oilseeds, and whimsical weather have aggravated the shortage and sent India’s import bill soaring despite best ever production in recent years.

Laxman Ittigi, 55, of Pattan village in Gulbarga (now Kalaburagi) district points to the sky when asked why pigeonpea (arhar) plants in the field around him are just a finger-length tall. Late arrival of monsoons has delayed sowing in parts of this pigeonpea-producing north Karnataka area.

A few kilometres away in another part of the district, women are removing weeds in Vithal Chavan’s fields in Saradige village.  The pigeonpea plants are a foot in height because of better showers a month ago, indicating the variation that even local weather is subject to.  He has inter-cropped sixteeen acres with pigeonpea, urdbean, moongbean, sunflower, soyabean and sesame, a pattern that reminds one of the syncretic tradition of Kwaja Bande Nawaz, a fourteenth century Sufi saint, whose mausoleum here is a big draw.

SMMannur with farmers in Gulbarga.

Pigeonpea prices have touched the highest ever rate of Rs 7,800 a quintal bringing farmers rushing in. About three thousand quintals of pigeonpea seed ─ many times more than last year ─ has been sold through the state’s public system, says S M Mannur, principal scientist (pulses) at the agriculture research station in Gulbarga. There would have been ‘havoc,’ he says, if delayed rains had not restrained farmers’ enthusiasm for pigeonpea.

Deficiency in rainfall predicted by the meteorological department has persuaded Shiv Pratap Singh, 38, of Mauhar village in UP’s Kanpur Dehat district to grow pigeonpea on two hectares of un-irrigated leased land. This is slightly more than last year. Singh is a member of the Chaudagara Kisan Samiti, a collective of 150 farmers organized as a trust to produce pulses seed under a (discontinued) centrally-sponsored programme, called Isopom, to promote crop diversification into pulses and legumes. Pigeonpea needs little water; rainfall at the time of sowing and flowering can see it through.

Not many in Kanpur have the perseverance of Singh. Udai Bir Singh, the president of another seed collective of 63

farmers has shrunk the area under pigeonpea from more than a hectare last year to an acre. A long dry spell followed by unseasonal rain at harvest time in February and March this year resulted in output dropping to just one quintal when 25 were expected. The pigeonpea he plants is of 280 days.  It has the advantage of two or three flushes. But when a long duration crop fails, ‘kisan toot jata hai,’ (the farmer is broken), Singh says.  As a hedging strategy, farmers in this areas have taken to growing double crops of shorter duration. This has told on pigeonpea production.

‘We are convincing farmers to grow short duration pigeonpea in place of rice in Punjab, Haryana and western Uttar Pradesh,’ says N P Singh, director of the Kanpur-based Indian Institute of Pulses Research.  Just as moongbean has replaced summer rice in some acreages, he believes, pigeonpea can replace rice in upland area.

Pulse crops do not require urea (nitrogen) fertilizer as they produce their own by absorbing the element from the air. An acre of pulses can add 40 kg of nitrogen to the soil, enriching north-west India’s overworked soils. Though pigeonpea comes in maturities ranging from 120 to 300 days, Singh believes, the 120-140 day crop is ideal.  There are varieties that mature earlier, but their yield is not high.

A landmark development is a pigeonpea hybrid crafted by the Hyderabad-based Icrisat or International Crops Research Institute for the Semi-Arid Tropics ─ a first in the history of legumes. It is of medium duration (150-165 days) and can yield 2,500 to 3,000 kg per hectare. The hybrid has been tested in light, medium and heavy black soils of central India but inadequate seed production by the public sector is an issue that Icrisat is grappling with.

Private seeds companies, with a few exceptions, have kept away from pulses seed production, because they are all open pollinating varieties whose seed farmers can save and sow.  Hybrid seeds, however, have to be purchased year after year. So why not tap the drive of the private sector and popularize pigeonpea hybrids emulating the example of Bt cotton hybrids which have covered 95 percent of cotton acreage in just 13 years?

‘We are involving the private sector seed companies to some extent,’ says C Lakshmipati Gowda, the deputy director general of Icrisat, who retired in January this year. Private seed companies are hesitant because pigeonpea is cross-pollinated by honey bees which are sensitive to pesticides. And the reputed ones steer clear of the government, the biggest buyer of seeds, as lowest cost tendering usually favours colluding cut-price suppliers with doubtful credentials.

In chickpea (chana), too,  which is India’s largest consumed pulse, India has made good progress. In 2013-14, area under chickpea was 10.22 million ha, a whisker short of the 1959-60 peak. Production was 9.88 million tonnes, or 51 percent of India’s total pulses production of 19.27 million tonnes, itself a record. Average productivity of chickpea has crossed the one tonne per ha mark (1037 kg) and output has doubled in the past ten years.

One of the interesting developments in chickpea is a machine harvestable variety developed by a team led by S M Mannur, principal scientist at the agricultural research station, Gulbarga, in response to the shortage of labour during harvesting time, and demand for wages that pinch farmers. But the state varietal committee has not met to stamp its approval for commercial release. A similar variety has also been developed in Andhra Pradesh. A variety made tolerant to weedicide with germplasm found with the species (and not through genetic modification) also holds promise.

But both pigeonpea and chickpea are ravaged by the pod borer. The Bt gene that has successfully controlled the stubborn pest in cotton can be used to create resistance but ‘scientists are constrained because we cannot do field-level trials,’ says Gowda, as state governments are reluctant to give no-objection certificates for testing genetically-modified food crops. Bt chickpea and Bt pigeonpea would be the ‘biggest revolution’ in pulses production, he says, as suppressing pod borer damage would raise yields by half.

Despite progress in seed technology, their potential yield is not being realised because public sector outreach is lacking. Seed production falls short of demand. Gowda says much of the current research and extension effort is disjointed and haphazard. He wants a national mission headed by a senior IAS officer to coordinate the activity.

Sharad G Tenglikar, a professor of community medicine in Gulbarga who grows pulses on 60 acres in Gundgurthi village of Chittapur taluk says farmers also need to change their habits. The local agricultural research station, he says, holds a number of camps and is deeply engaged with farmers, but they still ‘do it the old way,’ as ‘Indians have grass-rooted beliefs and traditions.’

Despite steep retail prices of pulses, smallholder farmers gain little as they sell soon after harvest when prices are low to repay crop loans. Tenglikar says big farmers and the district’s 200-plus dal mills skim the cream as they can wait for prices to rise.

The government’s own efforts smack of tokenism. It announces minimum support prices but does little procurement.

Mannur wants the government to set up ‘pulses parks’ with huge silos and processing mills. The pulses stored here can supply to ration shops, to exporters, to schools for nutritious meals and for open market operations when prices slump.

Discontinuing procurement of ordinary rice in Punjab and Haryana might provide an incentive to farmers to go back to pulses. Four million hectares has migrated out of chickpea in these areas and replaced by an equal amount in central and peninsular India. Bringing the past into the future might be as healthy for farming in north-west India as the pulses themselves.