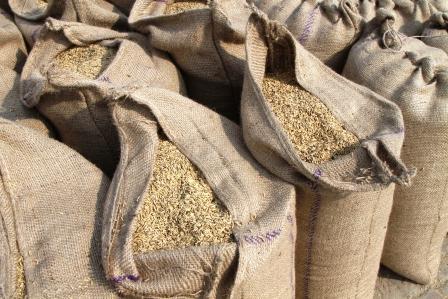 There is creeping nationalisation of the rice and wheat trade owing to high procurement prices, says T. Nanda Kumar in an article in the Financial Express. Kumar, who was food secretary in 2006 and agriculture secretary from 2008 to 2018 says 51 million tonnes of rice and 39 million tonnes of wheat were procured this year. This is 43 percent and 37 percent of their respective production.`

The grain procured is 25-30 million tonnes above buffer-stocking requirement. During 2006-08, it was decided to enhance the buffer stock by 5-6 million tonnes of strategic reserves to deal with emergencies like the global food shortage of 2008.

The government has become a significant player in the grain trade because procurement has been stepped up in states that did not contribute much to the central pool earlier: Madhya Pradesh, Odisha and Chhattisgarh. If UP and Bihar follow suit, the government might be impounding about half of the production of the two crops, Kumar says.

About a decade ago, the government was worried about procuring enough for supply through ration shops. The concern was whether the MSP was sufficiently attractive. But now there is excess production. The government is procuring more as about 2/3rds of the population is entitled to subsidised wheat and rice under the National Food Security Act of 2013. Since 2018, the minimum support price (MSP)  is calculated as 50 percent more than the cost of production, which includes all cash expenses and the imputed value of family labour. (It does not include the rent which a farmer would have paid if they had hired the farm).

Procuring so much grain is a huge logistical exercise. The carrying costs (MSP, plus handling, transportation and storage charges, and interest costs), are 40 percent more than MSP. This is a charge on the taxpayers of the country, who have to foot the subsidy bill.

There is overproduction also of sugar because the minimum prices which states advice the mills to pay for cane is higher than the Fair and Remunerative Price (FRP) fixed by the centre. In 2018-19, it was 75 percent higher. The result is huge unsold stock as production at 31 million tonnes is about 25 percent more than domestic requirement. Production has been boosted by a high-yielding variety of cane with a higher sugar recovery rate, called Co 0238 which was recommended for planting in UP in 2012. Mills are in arrears to farmers. The government has tried to bail them out by telling state-owned oil companies to buy more ethanol at higher prices, subsiding exports of six million tonnes by Rs 10 a kg or Rs 6,000 cr and not allowing sugar to leave factories at less than Rs 31 a kg.

If compelled to pay MSP, private traders won’t buy or they will pay MSP on paper, while paying lower prices to farmers. The state will have to step in to procure, and offload the stocks at a loss. It will disrupt the agricultural economy.