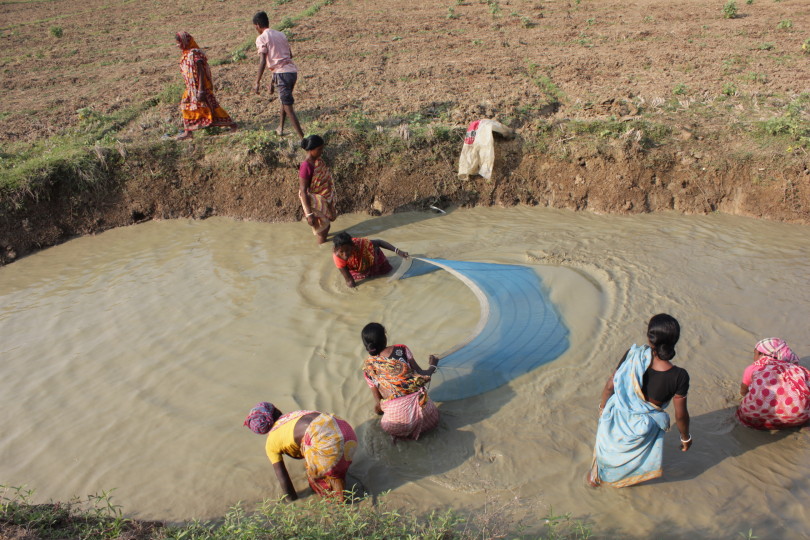 Sandipan Suman at a neighbour’s house in Nayanagar.

Sandipan Suman, 47, of village Nayanagar in Bihar’s Samastipur district is a B.Sc in agriculture from Meerut University. He recalls farmers in Western Uttar Pradesh owning five acres strutting around like game cocks, but in his village, they scratched out a living.  There was no dearth of water, but being low-lying the area would get frequently flooded There was a nasty one in 2004 and again in 2007. The latter persisted for two months. There was three feet of water in his house.

Suman took to agriculture in 1996 and applied his education to it. He is quite thrilled with the results. He has been growing maize in winter since 2007. He says it is a non-hassle crop; returns may fluctuate but loss is exceptional. Suman’s first experience of insurance was in 2007, when fortuitously he had taken insurance, on the advice of a large holder neighbour who had told him, on becoming president of a l rural  cooperative bank, that even non-loanees could avail it.  The neighbour was a descendant of a family of rent collectors under the British. They owned large tracts, which remained huge in this part of the country, despite having shrunk considerably after Independence. Suman remembers paying Rs 332.42 (yes, that precise!) as premium and getting a claim of Rs 5,400 when the bund across the river Burhi Gandak had burst and water had flooded into his house and fields. Since then he has got three claims paid for Rs 22,000, Rs 3,400 and Rs 8,700.

Suman believes agriculture is a most profitable activity in terms of return on investment, except when nature plays dice.

Sughad Singh, 41, of village Ajnokh of tehsil Chhata in Mathura district owns about two acres of land, which is what he is left with

after selling four. His wheat produce, he said, when we met him in May 2015, was a fifth of the normal. Hailstones, ‘as big as 800 grams’, flattened the standing crops. The size of the hailstones gets bigger with every retelling! But the point is taken: they were large enough to wreak havoc.  Singh is one of those who got Rs 1,700 as claim for paddy lost to drought during the last season. Do his neighbours know about crop insurance? ‘People do not know anything, xyz. Only money is deducted when we take a loan. The farmer is so desperate to get one lakh or four that he does not mind even if ten percent is deducted for various reasons. No one explains whether the crop insurance is for six months or one year.’

More Pal, 50, had 20 bighas, all of it under wheat, when the hailstorm struck. Some of it was leased. ‘I lost cent percent,’ he said in HIndi.  He had taken a loan of Rs 4.25 lakh from the local, Khaira branch, of Syndicate Bank. That was in March. The Kisan Credit Card limit is three lakh for concessional seven percent interest; he was paying thirteen percent on the balance. Pal had insured his wheat crop as part of the loan deal.  He said the premium was deducted from the loan when it was sanctioned.

Satyendra Kumar, 20, a dalit polytechnic student and son of a farmer from Ajnokh village insisted that we record his concerns and not just those of his upper caste neighbours. We were impressed by his assertiveness, which indicated shifting caste equations.  He said they had not got compensation despite folks protesting and political leaders being aware of their crop loss. What about insurance? ‘Nahin, jaantein hai bilkul.’ (We are just not aware). ‘Knowledge nahin hai aur gaon ke log kum pade hain aur fayda bhi nahin utha paye hain (We do not have knowledge and our folk being less educated, have not been able to take advantage of it).

Jugraj Singh Bansi, was working as at a post office in San Jose, California, but decided to return to his village in Madar in Jalandhar district eight years ago. Together with father Joginder Singh, he farms about 150 acres,  half of which is leased at about Rs 30,000 an acre per year. Bansi is quite well off, he has a large house, so he does not sound credible when he says, ‘we need migration (out of agriculture), not diversification (out of rice to maize, which is depleting ground water).’

Jugraj with father, Joginder Singh Bansi, at their maize farm in Jalandhar.

His whining is not without reason. Electricity is free for farmers in Punjab, but it is very erratic. When we met him on 22 April, 2015, he had been up the previous night, trying to cajole technicians at the local sub-station into rectifying a fault and restoring power.  It is the ways of the government which Bansi, an NRI, finds most vexing.

Bansi experience with insurance is not happy either. A couple of years ago he had insured the potato crop against frost.  When he found the crop damaged, he called up the insurance company, only to be told that at its weather station in Adampur, there was no frost-related damage. ‘I insured the crop here (in Madar), not at the weather station,’ he says.

Both insurer and policy holder may be right, but having a dense and close network of weather stations will only drive up the price of insurance.

(Top photo: Insurance net: not wide enough.  Women looking for fish at a pond in Bardhaman district of West Bengal. By Vivian Fernandes)