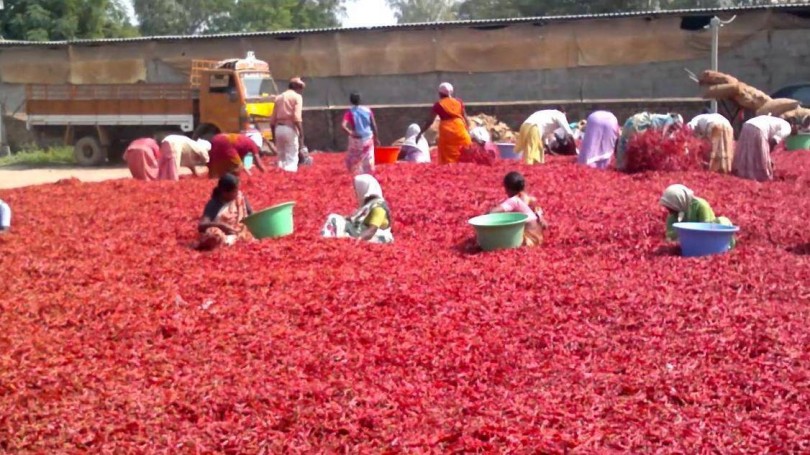 The decline in business might have been arrested to some extent if payments had gone electronic as well, but going cashless is not an option for rural India, reports Vivian Fernandes. A version of this report was first published in the Financial Express.

Trading in almost all of Karnataka’s commodity mandis went online after the state adopted pioneering root- and-branch reforms in early 2014 but if progress in making payments directly into the bank accounts of farmers were as swift, the decline in business after the demonetization of high value currency notes might have been arrested.

(But farmers will still need to take cash out from bank accounts to pay for their needs. Visits to agri-market yards in rural Karnataka showed that going cashless is not an option for rural India because the infrastructure for making digital payments will take a long time to be set up and the comfort level will not be easily achieved. Cash should not be vilified because it is easily portable and gives even unlettered people autonomy).

The value of trades between 8 and 16 November fell by 35 percent to Rs 414 cr in 152 of the state’s 158 mandis that have gone electronic. Their turnover between 1 and 8 November, when demonetization was announced, was Rs 633 cr. The number of lots traded fell 34 percent from 74,619 to 48,892, and traded volume declined 38 percent from 137 lakh quintals to 85.1 lakh quintals between the two periods, the analysis shows.

This analysis was made available by Manoj Rajan, the MD and CEO of Rashtriya e-Market Services. ReMS is a joint venture of the National Commodities and Derivatives Exchange (NCDEX) and the Karnataka government. It operates the electronic trading platform of the state’s mandis.

Settlements were mostly in cash before demonetization. Following that event, farmers have opted for payments by cheque, direct bank transfer, deferred cash and demonetized currency notes, depending on value and their faith in the commission agents, mandi officials said.

Demonetization in an opportunity to give direct bank transfers a push. An official of the Tiptur market near Bengaluru said the reluctance of banks to offer lines of credit to traders was holding back the migration to online payments, a point which Rajan endorsed. But Samir Shah, MD and CEO of NCDEX, says traders were also resisting because “in any market the guy who pays the money to the supplier controls pricing power.”

Unlike the central government’s electronic National Agricultural Market (e-NAM) project, Karnataka’s reforms are thorough. More than computerizing the old processes, it has overhauled the processes themselves.  The difference may be compared to bank computerization in the early 1990s and Internet banking now.

Three things worked against farmers in the earlier system. Competition was limited to local traders in a mandi making it easy for them to collude. Now trading in all the mandis is unified and traders have state-wide licenses. Farmers did not know the prevailing prices. Farmers did not bother about quality because prices did not match them. Traders would routinely make deductions for poor quality, often falsely, so farmers had little incentive to offer better. They would, for example, wet cotton or add stones in chana to increase their weight. Short weighing was routine. Chits of paper substituted for formal bills.

Now, when a farmer arrives at the marketing yard, an entry slip with his name and mobile number is generated. The lot is weighed electronically. A sample goes for assaying. This facility is available in 40 mandis and for 20 of 42 traded commodities.

Parameters like moisture, defects and foreign matter content are noted and a certificate is given. Currently assaying is done by the National Collateral Management Corporation.  (To ensure that the assayer does a faithful job, and does not understate quality as a matter of caution, certificates are randomly audited by a third-party with control samples). The information is posted on the trading platform and the bidding starts. An SMS of the highest quote is sent to the farmer who can elect to accept it within half an hour. Once the assent is given, a bill is generated and payment is made in cash or directly into bank accounts, if they are registered for it.

With increased competition farmers are supposed to get a higher share of the consumer price. “This is the litmus test of whether reforms have happened or not,” says Rajan.  He certifies that Karnataka’s reforms have passed the test. Year before last, pigeonpea prices per quintal in the Yadgir market (Rs 4,113 on average) trailed those in Kalaburagi (Rs 4,245). Both were offline then. Last year, after it went online prices in Yadgir were Rs 5,200 ─ Rs 300 higher than in Kalaburagi, which has resisted change.

Turmeric traders from Karnataka, Kerala and Tamil Nadu are shifting from Erode to Chamrajnagar. Rajan says. Arrivals have increased four-fold from 23,811 quintals in 2013-14 to 100,511 quintals in 2014-15 despite no expansion in growing area. Prices between the two markets have narrowed to a sliver.

But farmers will have to learn to produce to specifications since futures transactions are in standardized lots. For instance, groundnut with moisture content of 18-20 percent fetched Rs 3,170 a quintal but when the moisture was reduced to 4-6 percent, the price rose to Rs 5,244, a gain of more than Rs 2,000, on a small loss of weight.  With a little bit of processing, like drying, farmers can capture value which traders now do, says Shah.

In conventional markets, farmers sell whatever they produce. Even if they produce quality, chances are traders will not reward them for it. “We have neglected standardization,” says Gopal Naik, Chair for Economics and Social Sciences at the Indian Institute of Management, Bangalore. Naik was a member of the committee that prepared the blueprint for Karnataka’s marketing reforms. “Over time, we have not told farmers what the market is looking for.” National standards have also become obsolete. ReMS is now preparing standards based on 25,000 samples.

With direct transfers to bank accounts, farmers will be able to develop a credit profile. This will help them to access bank finance and to be less dependent on traders and commission agents for credit. This de-linkage is essential for farmers to be free to sell their produce. So long as they borrow from traders, they will be compelled to sell to them at lower than market prices.  Demonetization might yet result in good if the current disruption is swiftly controlled.

(Top photo: Byadgi chilly market in Karnataka. Commission agents and traders there had decided to suspend their activity because of the cash squeeze but Agriculture Produce Marketing Committee Secretary Guruprasad said  he had to persuade them not to, so as not to risk the violence of farmers. Photo sent by Guruprasad).