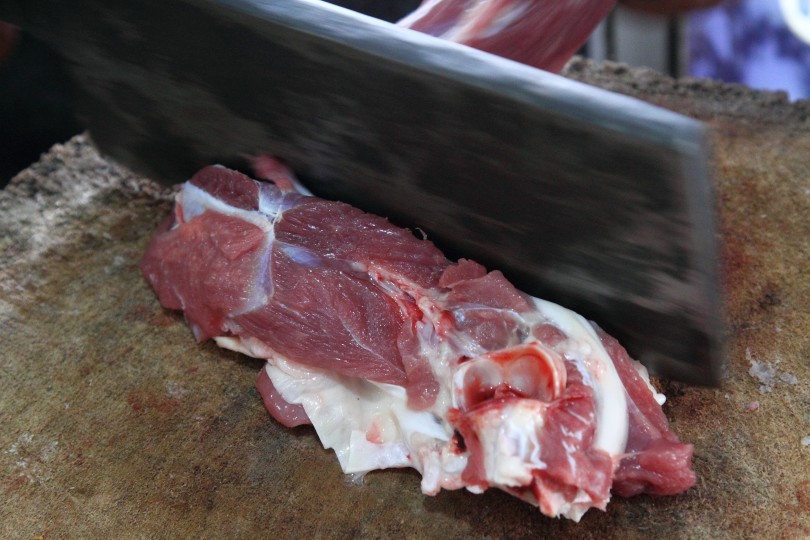 In a wise order the Lucknow Bench of the Allahabad High Court says citizens should not be deprived of meat, and meat sellers of their livelihood for the failure of the Uttar Pradesh administration to comply with food safety and animal welfare standards in the slaughterhouses it owns and operates. Government inaction should not lead to near prohibition of meat production and sale.

The 19-page order of the Lucknow bench of the Allahabad High Court on the closure of so-called illegal slaughterhouses in Uttar Pradesh is a call for the state to observe “Raj Dharma” and not act in a “legally unconstitutional” manner.

While directing the municipal corporation of Lakhimpur Kheri to consider the application of Saeed Ahmed for renewal of his goat meat shop license within a week, the court observed that “inaction of the state government in the past should not be a shield for imposing a state of almost prohibition.”

Ahmed had filed the writ petition for renewal of his license which expired on 31 March, for this financial year.  He said the corporation was not taking any action as there is a “drive to shut down unlawful slaughterhouses that were being operated throughout the state.”

That the government passed four orders on 22, 24, 27 and 28 March after Yogi Adityanath took oath of office as Chief Minister following the BJP’s massive victory in the assembly elections, on 19 March, shows how abrupt the drive has been. The serial orders smack of a tentativeness which the country witnessed in the days following demonetization of high value notes on 8 November, last year.

The UP government said it was following the orders of the Supreme Court with regard to prevention of cruelty to animals and observance of food safety standards in the slaughter, transportation and sale of meat. These orders were passed in 2012, 2013, 2014, 2016 and 2017. The government also cited the 2015 order of the National Green Tribunal with regard to disposal of effluents from slaughterhouses.

The court said while checking unlawful activity, the government should simultaneously facilitate lawful activity to be carried out, particularly if it relates to food, as it affects life and livelihood.

“Food that is conducive for good health cannot be treated as a wrong choice,” the court observed drawing a distinction with substances like alcohol which are harmful, and where the rights of consumers can be tightly constrained. It is the state’s duty to make provisions for the availability of wholesome food, the court said.

The court wisely observed that “health, culture and personal food habits,” the general “socio-economic level of society,” the availability of food at affordable prices, ease of access and “the balance of such competing rights under the secular umbrella of the Constitution” are all issues that “need deliberation before any overt or covert action is taken.”

In 2016, the Supreme Court had ordered a compendium of Indian standards on meat and meat products to be circulated among state governments, so they can take action for compliance. The UP government set up a committee which made proposals for modern facilities to be established. But there was little action on them.

The court said in the absence of facilities for the humane treatment of animals and their slaughter in hygienic conditions, “the trade may face complete prohibition” which would affect livelihoods impinging on the right to life.

While export-oriented slaughter houses and processing units in UP are certified by export agencies like Apeda and FSSAI, the food standards body, there is little oversight on municipal slaughterhouses. Almost all of them are in a pathetic state, says S K Ranjhan, an 82-year-old veterinarian, whose career spans the dairy and meat industries in government, multi-lateral agencies like the World Bank and the private sector. He is director of Mirha Exports, which has a buffalo slaughterhouse in Dera Bassi, Punjab. The meat is processed in Sahibabad, UP. That unit has been shut since the drive began because it fears attacks on meat transporters from gau rakshaks or cow protection vigilantes.

The court observed that the production and sale of meat in rural areas is permitted under UP’s Revenue Code of 2006.  The laws say that the state must provide a slaughtering platform within a radius of “2 miles” from the weekly or daily animal haat (bazaar) in rural areas. The state cannot be unaware that making such provisions in remote and far flung areas is difficult. But that should not lead to the prohibition of a lawful activity.

(Top photo: Goat meat being cut at a shop. Photo by Vivian Fernandes).