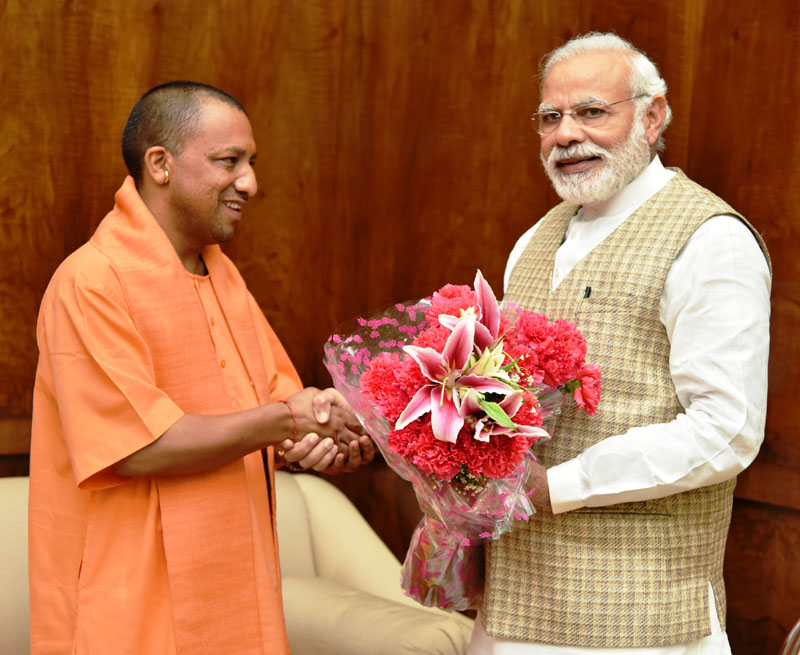 The Uttar Pradesh government must modernize its municipal slaughterhouses which operate in unhygienic conditions in violation of norms. This will ensure hygienic meat without polluting water and soil and also boost the state’s economic growth, according to a working paper of the Delhi-based research organization, ICRIER, authored by Smriti Verma, Ashok Gulati and Siraj Hussain.

Total meat production in UP’s registered slaughter houses, including meat processing plants, was about 1.1 million tonnes in 2014-15. Of this buffalo meat accounted for 69 percent, mutton 18 percent and pork 13 percent.

The BJP’s strong win in the recently concluded assembly elections and the installation on a Hindutva spouting priest as chief minister has shaken the state’s buffalo meat industry. The ruling party had said it would impose restrictions on buffalo slaughter. The party’s Hindi and English manifestos did not spell out clearly whether mechanized abbatoirs would be closed down or such action would be restricted to those without all the approvals.

“We are making a long list of compliances from every department,” said Priya Sud, partner in Meerut-based Al Noor Exports, so that the slaughter houses know where they stand with regard to the law. “People do not know what is legal and what is illegal,” said Sud who has studied food biotechnology and food production management.  She is one of three partners in the business along with her father and uncle.

Livestock contributed the most to UP’s agricultural growth between 2000-01 and 2013-14, the Icrier study says. Milk had the biggest share in growth (28.9 percent) followed by meat (5.6 percent), wool and hides, and eggs.  India is the world’s biggest exporter of beef (buffalo meat) and UP is the largest contributor. It has an opportunity to export more this year as Brazilian beef exports are facing safety issues.

The Icrier study does not emphasize the meat industry in its summary of recommendations, perhaps for political reasons. But the emphasis can be inferred from the importance it gives to livestock, especially dairying. In India, the buffalo meat industry is an offshoot of the milk industry. (See story).

At 25 million tonnes a year, UP is the largest producer of milk, but processes less than 12 percent of it through the organized sector, compared to Gujarat which processes half of its milk production. The state’s dairy farmers who supply to cooperatives get paid 15-20 percent less than those who supply to private companies and all of them get lower rates than dairy farmers in Gujarat. The researchers want the state to invite the milk cooperative, Amul, and private dairy companies over so that the share of processed milk rises to at least 30 percent of milk production in the next five years.

To increase milk productivity they want poor yielders to be replaced by Indian pure breeds or cross breeds, and technology to be used for sex selection so that the share of milk-giving female bovines increases.

The World Bank’s 2008 development report said growth in agriculture in a country like India is much more poverty reducing than growth in industry or services. This is especially true of UP, where 59 percent of the workforce is engaged in farming. It also has the largest share of people in the country below the poverty line (29.4 percent). A little less than 93 percent of its land holdings are of less than 2 hectares each and 90 percent of these holders are indebted.The share of agriculture in the state’s GDP is declining. It averaged 29 percent in the three years to 2014-15. Agricultural growth between 2000-01 and 2014-15 averaged 2.5 percent, lower than the country’s 2.9 percent rate.

Sixty nine percent of the state’s land is under irrigation but because this is mostly based on groundwater, price incentives and relative prices of agriculture matter, so farmers can earn a profit and invest in irrigation.

To rev up agricultural growth, the study says, UP must incentivize farmers. It notes that paddy farmers especially in eastern UP get less than the support price declared by the government. The authors say the state must ensure there are more arrivals at mandis in central and eastern UP, that procurement happens, declared rates are paid promptly, updated price and arrivals data is posted on the portal Agmarknet, and the state’s mandis are on a common electronic trading platform.

The state’s sugarcane farmers have suffered from “distortionary” pricing policies, the study says. It recommends that they be paid “fair and remunerative prices” as recommended by a committee headed by former Reserve Bank governor, Chakravarty Rangarajan. Inefficient cooperative sugar mills should be privatized through auctions and the sale of molasses to the liquor industry at less than market prices should be stopped.

The study says the government must invest in rural roads. Nearly 50,000 habitations are still not connected. It must provide regular and quality power, set up warehouses and cold storages, complete delayed irrigation projects, and promote drip and sprinkler irrigation in dry Bundelkhand. .

There is much going for Uttar Pradesh. It can double the annual agricultural growth rate if the leadership has clear ideas about what needs to be done and a resolve to implement them without getting distracted by sectarian agendas.