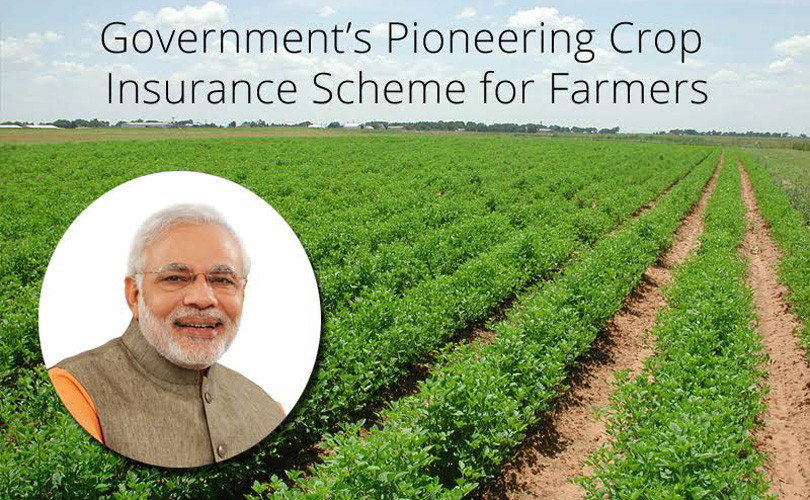 India has a history of crop insurance schemes that were folded up because of huge losses. Those in operation between 1972 and 2013 ended up with eight-, seven- and three-fold losses. The Modified National Agriculture Insurance Scheme and the Weather-Based Crop Insurance Scheme have made small profits. The new scheme is heavily subsidized, but the money should compensate genuine losses. That cannot happen without a technology shield reports Vivian Fernandes.

The crop insurance scheme renamed as the Pradhan Mantri Fasal Bima Yojana to be launched from April is actually a modified version of the modified National Agriculture Insurance Scheme or mNAIS, which was introduced in select districts in rabi 2012-13.   A new scheme, the Unified Package Insurance Scheme (UPIS) — a bundle of crop, building, water pump, tractor, accident, death, health and student safety insurances for farmers will also be launched simultaneously in 45 districts.

The Weather-based Crop insurance Scheme (WBCIS) launched in 2007 will continue as also the Coconut Palm Insurance Scheme (CPIS). The total outlay for the crop insurance schemes, including those specifically for north-east India, dalits and tribals, currently is Rs 3,100 cr. This is expected to rise to Rs 4,500 cr in the coming year because of higher subsidy and wider coverage, rising up to Rs 8,800 cr in the third year, when fifty percent of farming households are expected to be brought under crop insurance cover from the present 23 percent, officials in the agriculture ministry said.

There is no cap on the government’s premium liability.  The sum assured is the threshold yield for a unit of land multiplied by the minimum support price declared by the government, or the farm gate price announced by the marketing board, for the crop grown in it. The threshold yield is the average for the past seven years excluding calamity years. Earlier, it paid up to 11 percent of the actuarial premium for kharif crops (cereals, millets, oilseeds and pulses), nine percent for rabi crops and 13 percent for horticultural crops. To keep within these limits, the sum insured would be reduced proportionately and farmers would get very low indemnity. (For WBCIS, the rates were capped at 10 percent, eight percent and 13 percent respectively).

Sughad Singh, 42, of village Ajnokh in Mathura district told this correspondent that he had paid a premium of Rs 400 to insure two acres of kharif rice in 2014 and was paid Rs 1,700 when monsoons failed.  The high premium and low compensation deterred farmers. Under the new scheme, the premium that farmers will pay has been capped at two percent for kharif crops, 1.5 percent for the less risky rabi crops and five percent for horticultural crops.

Insurance providers will be selected from a list of ten, including eight private companies, on the basis of the lowest premium quoted.

There will be reliance on technology ─ drones, smartphones and remote sensing. Remote sensing technology will be deployed for ‘intelligent sampling,’ that is to identify high and low yield areas. More samples will be taken from low yielding farms.  Since four crop cutting experiments (CCEs) are prescribed for each village or village panchayat to determine actual yields, if satellite pictures show uniform losses over an area, fewer samples or CCEs will be taken. The actual yields will be compared with average or threshold yields to determine the payout to all the insured farmers in that village or panchayat in case of a bad weather event.

Smart phones will speed up the flow of field data. Currently it takes about seven months. The intention is to reduce this to about two months. Geo-referencing (or GPS coordinates) and time-stamping will tell the insurance companies where and when the pictures  of crops were taken.

India has a dense network of automated weather stations, more than 5,000 of them, but many are along canals to warn against flooding, the officials said. There are only a few in farms. Even those are installed on terraces or roof tops. While this protects them from damage, their readings are not accurate as they do not capture the actual weather which crops experience.

The Indian Met Department has in its report to the agriculture ministry recommended that they should be placed at ground level. The ministry has relaxed the time by when this should be done. States are expected to comply by April.

Initially, the use of technology will be limited to two districts each in four states: Karnataka, Maharashtra, Madhya Pradesh and Haryana. In the light of that experience it will be extended to the whole country.  An outlay of Rs 5 crore will be made for providing smartphones to village-level officials

The P K Mishra committe on insurance, which gave its report in May 2014, had said the pictures should be sent to a central repository which would have details of borrowers (for whom crop insurance is mandatory).  If the GPS coordinates match the details provided by borrowers, a confirmatory message should be sent to the insurers. If not, an alert should be sounded.  Technology will also help tackle area discrepancy, that is, insured area for a crop being more than the area actually sown. Insurers correct for this by applying a reduction factor, but this is unfair on honest farmers.

The crop cutting will be done by village-level officials like extension workers and patwaris. The Mishra committee wanted them to be trained and over time employed as a specialized cadre.

The weather-based crop insurance scheme does not rely on CCEs but on indices. If say rainfall, falls below the average by a certain percentage, claims will be automatically paid out, losses being presumed even if they have not actually occurred. From 2007 to 2014, the claims paid out under WBCIS  were Rs 5,216 cr  or 70 percent of the premium earned (including subsidy).

P C Aggarwal, who researches insurance at the Borlaug Institute for South Asia (BISA)  says insurance products can be refined to better address farm-level risks, but weather and yield data at the village, block or district level are hard to obtain or very  expensive. The Mishra committee wanted weather data to be treated as a public good. It also said that states should keep a single series of data. The Small Area Crop Estimation Method, which uses satellites or 3D cameras mounted on aircraft, should be used.  Historical time series of crop yields should be built for villages, panchayats and blocks. These are available till the district and state levels but should be narrowed down, the committee said.

Crop insurance is susceptible to fraud because of the large number of small plots, the distances involved and the difficulty of monitoring whether crops have been actually sown,  over the area stated, whether they are not neglected, whether crop cutting has been done diligently and the yield data is not massaged.

The Economic Times had in a report in April 2015 detailed how rampant crop insurance fraud was.  Based on top level conversations with the Agriculture Insurance Company of India (AICI), it said farmers in Mehsana, Gujarat, for example, had collected claims for depressed groundnut yield of 32 quintals an acre, when a re-check showed the actual yield was 450 quintals. Fraud is endemic in Gujarat, Maharashtra, Karnataka, (undivided) Andhra Pradesh and Tamil Nadu, it said. An executive of AICI said ‘there are districts where farmers only harvest insurance claims.’ These included Dharwad and Haveri in Karnataka, Sivaganga and Nagapattinam in Tamil Nadu, Aurangabad and Jalgaon in Mararashtra, Gujarat’s Saurashtra region and the Rayalaseema region of Andhra Pradesh. Under political pressure, it said, bank managers  sanction multiple loans for the same crops to various members of a family, and get multiple insurance covers as well.

With honest intentions and a problem-solving attitude crop insurance can truly become a risk mitigation tool in an activity where risk is inherent. That will enable farmers to take risky but profitable bets.

We look forward to your comments. Kindly post them in the ‘comment’ box or email them to smartindianagriculture@gmail.com