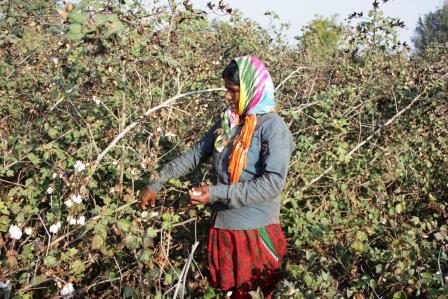 With falling commodity prices, farmers will need income support. The best way to do this is to transfer the money directly into their bank accounts. Vivian Fernandes reports that this will curb the misuse of fertilizers and corruption. The savings could be used to invest in infrastructures and ag research & extension.

The World Development Report,2008 says, ‘growth generated in agriculture has large benefits for the poor and is at least twice as effective in reducing poverty as growth generated by other sectors, controlling for the sector’s size.’ The report admits that as countries grow richer, agricultural growth may not be as effective in reducing poverty. But India is not at that stage yet.

Growth is a function of investment. The Planning Commission assumes it takes four units of capital to deliver one unit of growth (difficulties in acquiring land, obtaining environmental clearances and other impediments to doing business have further reduced the productivity of capital in recent years).  To achieve the targeted agricultural growth rate of 4 percent a year, investment in agriculture, both public and private sectors included, as a percentage of agri-GDP should be at least 16 percent. From 1980-81 to 2007-08, it was well below this figure. At the beginning of the last decade it was as low as 9.6 percent. By 2006-07, it has inched up steadily to 12.5 percent.  In 2007-08, it jumped to 16. 1 percent and at last count, that is, 2011-12, it was nearly a fifth of agri-GDP. If this rate of investment continues for some time, Indian agriculture should be able to grow at 5 percent a year. (This is based on the old series of national accounts, with base year 2004-15. The new series published on 30 January, 2015 is based on 2011-12 as the base year).

It is not as if the government is spending less. Spending is tilted towards welfare and subsidies; not investment and growth.  The central government’s budget outlay for agriculture doubled in the 1990s to Rs 1,800 cr.  Since then it has grown by twelve times to a shade less than Rs 22,000 cr. But the budget for the rural employment guarantee scheme alone is Rs 33,000 cr. The provision for major subsidies in the 2013-14 budget was Rs 2,20,000 cr. The payback in terms of poverty reduction would have been higher if more funds were lavished on agricultural investment.

The share of public sector investment in agriculture has been falling. In the 1980s, it was a little less than half of total investment.  At the end of the last decade it had shrunk to a fifth. To get a measure of the skewed priorities consider this: the government’s investment in agriculture in 2009-10 was Rs 34,521 cr; the food subsidy alone was Rs 72,823 cr. Households have made up, and are investing more.

The argument against subsidies is that they crowd out investment. The fertilizer subsidy was Rs 60 cr in 1976-77.  By the 2014-15 budget it had swelled to Rs 67,970 crore — an increase of more than 1,100 times (not adjusting for inflation).  To put this in context, agriculture GDP grew 55 times, the economy as whole swelled 140 times and fertilizer consumption grew seven and a half times during this period of nearly three decades.

Two-thirds of the subsidy on fertilizer went to the companies producing them, said a 2003 study (by Ashok Gulati and Sudha Narayanan) which analyzed the data from 1981-82 to 1999-2000. During some years, farmers got less than half.  In its 2012-13 economic outlook the Prime Minister’s Economic Advisory Council said subsidies were becoming an unbearable fiscal burden and were progressively losing relevance, so a beginning could be made to reduce and cap them. This was also the advice of four previous committees which tested the issue on the touchstone of economic efficiency.

The practice of the government fixing the retail prices of chemical nutrients began in 1957 with the Fertilizer Control Order.  It has evolved over time.  In the first flush of liberalization, in 1993, the prices of di-ammonium phosphate (DAP) and Muriate of Potash (MoP) were decontrolled. In April 2010, the nutrient based subsidy was introduced. This applies to DAP, MoP, SSP (single super phosphate) and complex fertilizers. Producers are free to retail prices but will get a fixed subsidy based on the proportion of nutrients in them. For phosphate and potassium, the subsidy for 2013-14 was a little over Rs 18 a kg, and for sulphur Rs 1.64 a kg.  Urea, which accounts for half of fertilizer and 78 percent of the nutrient nitrogen consumed in India, has remained outside this fixed subsidy, floating price formula because of political resistance.

Because of the steep rise in oil prices in the past decade, the effect of decontrol was to jack up the price of DAP from Rs 9,350 a tonne in March 2010 to Rs 24,000 in June 2012.  The price of MoP shot up from Rs 4,455 a tonne to Rs 17,000 a tonne during the period. The share of subsidy in the cost of DAP halved from nearly 80 percent just before decontrol to 40 percent. There was a similar steep decline in the case of MoP as well. Because of this, the consumption of DAP fell by 2.9 percent and of MoP by a steep 23 percent, while that of urea, whose prices are controlled, rose 4.4 percent.  In 2012-13, farmers used seven parts of nitrogenous fertilizer, three parts of phosphatic and one part of potassic fertilizers.The ideal ratio is 4:2:1. By using more of cheaper urea for less of the other two costlier fertilizers, farmers were trying to get a grip on costs – and damaging their fields.

During a ten year period from the mid-90s to the mid-2000s, Sharma found that farmers in irrigated areas used three times the quantity of fertilizers per hectare than those in un-irrigated areas. But fertilizer consumption increased at a higher rate in the rain-fed areas. Much of this was urea. If decontrolled, urea prices, say in January 2015, would have shot up from the government controlled price of Rs 5,360 a tonne to Rs 19,833 a tonne (plus shipment charges).  While the subsidy burden would have been slashed, fertilizer use would have fallen, impacting food security. Sharma believes that a large consumer like India cannot depend on volatile and cartelized international imports, especially when domestically produced urea is cheaper and more competitive.

But fertilizer subsidies cannot be open-ended. At 30 percent of major subsidies they are a burden.  With oil prices falling, there will be relief on this front. But subsidies are an inefficient way of delivering them. Crediting them to farmers’ bank accounts directly would be neat.  A per hectare payment, as Gulati suggests, will allow farmers to decide what to grow, and how much of what fertilizer to use.Will them government be able to do this without glitches and dislocation? Even if it did, informal tenants would be excluded. Most farmers cannot afford to pay the full price first and receive subsidy later. Sharma believes rationing of subsidized fertilizer will do the trick; it will favour small farmers though informal tenants will suffer.