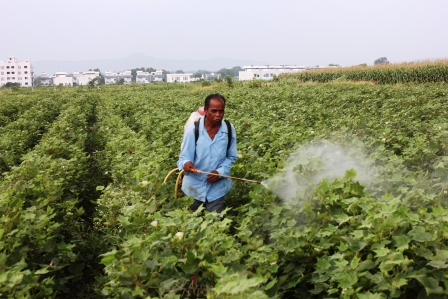 Farmers and the pesticide industry are agitated over a series of draft notifications proposing bans or restrictions on plant protection chemicals that have been long and commonly used, reports Vivian Fernandes. On 3 February, the agriculture ministry sought to ban tricyclazole, a fungicide widely used in rice cultivation.  In May, the ministry issued another notification proposing to ban 27 chemicals. And on 8 July, it issued a third draft notification to restrict the spraying of a popular weedkiller, glyphosate, only by licensed pest control operators.

Do these bans and restrictions have a scientific basis?

The 27 chemicals proposed to be banned were identified by the Anupam Varma Committee set up in 2013. Of these, 12 are insecticides, eight fungicides and seven herbicides. In terms of toxicity, six are green triangle or ‘unlikely harmful’, eight are blue triangle (slightly toxic), while the rest are moderately (2), highly (7), and extremely-toxic (4). Sixteen of them were categorised as ‘Deemed Registered Pesticides’ as they were in use before the Insecticides Act became operational in 1972. Their continued use was allowed on the basis of approval given elsewhere so as not to disrupt agriculture.

The Varma committee’s initial mandate to review the use of six neonicotinoids was soon expanded to 66 more generic chemicals that were banned, restricted or withdrawn in some countries. In its 2015 report, the committee advised immediate ban or phasing out of some chemicals. For 27 chemicals it prescribed studies to be conducted and submitted by December 2017. These mostly pertained to residues and persistence in the environment. In some cases, effectiveness against target insects, weeds and disease-causing bugs was to be examined. A few chemicals were to be tested for groundwater contamination and harm to birds, fish, earthworms and honeybees. For a couple of molecules, the impact on iodine metabolism and thyroid function were to be studied.

A common reason for the ban cited in the notification is that the companies or industry associations did not submit reports of studies which the committee advised. When Crop Care Federation of India (CCFI), a group of mainly of Indian companies, was confronted with the non-compliances, its Chief Scientific Adviser, Jagadish C Majumdar gave a molecule-wise reply. He said for 13 molecules the required data has been given. For two of these chemicals, Bayer and Sumitomo submitted data based on what they considered to be valid protocols after the Registration Committee (RC) did not suggest the protocols. For the effect of thiophanate methyl, a fungicide, on earthworms Biostadt, gave its own protocol, which the RC approved in late 2019. For benfuracarb, an insecticide, the registrant, Coromandel International did a study on its effectiveness against nematodes in brinjal though it is approved only for rice and tur. CCFI said these crops do not get nematode attacks and the company is applying for the chemical to be approved for use on brinjal instead.  Four molecules – butacholor, dicofol, dinocap and methomyl – are not being defended by any company. For nine molecules, most but not all the data has been given. In one case, studies are underway.

According to the pesticide association, the actions of the authorities created confusion and abridged the two–year time for completion of studies. The RC added new studies in addition to those recommended by the Anupam Varma Committee. In view of these developments, the RC decided in April 2019, to extend the deadline for completion of studies to end of last December but in July, it reversed the decision, saying the agriculture ministry had over-ruled it.

The reasons cited in the draft gazette notifications betray an eagerness to ban. The list of countries where the chemicals have been prohibited is drawn from the website of Pesticide Action Network, an advocacy against industrial agricultural and chemical pesticides. Some of the countries cited ─Syria, Saudi Arabia, Ivory Coast, Chad, Suriname, Mozambique, Cape Verde, Fiji, Guinea, Niger, Mauritania, Palestine (sic), Tongo and Senegal– cannot be models for an agricultural major like India. UK’s Pesticide Properties Database suggested as a reference site by Indian Agricultural Research Institute’s (IARI) division of agricultural chemicals, says of the 27 chemicals, 20 are approved for use in Australia and 18 in the US. In the EU, 13 are in use across all the 27 member-countries or in some of them, or they are approved but inactive.

When contacted, Anupam Varma said the RC must “re-review” its decision to ban the 27 chemicals.

At an online conference, Agricultural Commissioner S K Malhotra said the advantages of a plant protection chemical are known upfront but their menacing aspects get discovered over time. This is not always the case. Old need not mean dirty. All molecules and their formulations go through a rigorous process of approval. Their ingredients; the amount, timing and frequency of use to serve the purpose intended; and how harm to humans, animals, non-target organisms and the environment can be avoided or minimised are determined through careful study before being permitted for use. But as science evolves and new knowledge becomes available, the molecules will have to be reviewed. In the EU this is done every 10 years. In the US, it’s every 15 years.

India must also move from ad hoc reviews to periodic ones every 10 years, as the Varma Committee suggested.  Its registration and review processes must be transparent and not opaque as now. The documents which formed the basis for the bans and restrictions, for instance, were uploaded on the agriculture ministry’s website only this month on court orders obtained by CCFI and Crop Life India, a group comprising multinational companies.

In February, the government proposed to ban tricyclazole on court orders. The chemical is moderately toxic and has been in use since 1976 for control of neck blast, a fungal disease in rice. From January 2018 onwards, the European Union reduced its maximum residue level (MRL) by a hundred-fold to one milligram per 100 kg (0.01 ppm). This is below detectable levels. Rice exporters faced rejection of consignments when traces of the chemical were found and wanted the fungicide banned.

Anupama (no surname), head of the IARI’s division of agricultural chemicals says there is a need for harmonisation of pesticide MRLs across the world through the World Health Organization (WHO).  Ashok K Singh, the Director of IARI says nations will reserve the right to fix food safety standards.  Though the EU does not rank among the top 10 basmati rice importers, it cannot be ignored. In the three years to 2019-20, it imported an average of 2.79 lakh tonnes of basmati from India worth about $266 million as compared to 1.54 million tonnes which the Gulf  Cooperation Council states of West Asia imported for $1.60 billion. India’s average annual exports of basmati during this period was 4.3 million tonnes valued at $4.42 billion. The United States also imports basmati from India. Its MRL for tricyclazole is 3 ppm, that of Japan 8 ppm. Yet the EU sets the standards for us. Since the alternatives are expensive, Singh has proposed a compromise solution. He says the use of triclylazole could be prohibited only in Sirsa and Fatehabad districts of Haryana which account for 90 percent of the basmati varieties  – Pusa Basmati 1 or Muchhal and Pusa Basmati 1401 – that India’s exports to the EU.

The government’s restriction on the use of glyphosate – to be sprayed only by pest control operators – is inexplicable.   It seems to have been done in deference to the Prime Minister’s office, which forwarded a letter from former AIADMK Rajya Sabha MP, V V Swaminathan, seeking the ban. The RC in its recommendation admits that the herbicide is internationally classified as “slightly hazardous” and that the WHO’s International Agency for Research on Cancer (IARC) has classified it as “probably carcinogenic to humans.” This, it says, is based on “limited” evidence of cancer in humans and “sufficient” evidence of it in experimental animals. In the US, in jury trials, the chemical was indicted for causing Non-Hodgkin’s Lymphoma upon prolonged exposure and multi-million dollar damages have been awarded. Bayer CropScience has agreed to settle the lawsuits for $10.5 billion, but it has not admitted that its glyphosate brand, Roundup, causes cancer. It is also appealing the trial court orders. The US Environment Protection Agency has not banned the product. In January, after considering public comments, it said it “continues to find there are no risks of concern to human health when glyphosate is used in accordance with its current label.” In the EU it is approved for use till December 2022. Yet the RC said it is banned in 20 countries citing SustainablePulse, a group that is opposed to chemical agriculture and GM crop technology.

Anti-GM activists want glyphosate banned to thwart the cultivation of glyphosate-tolerant crops like cotton. In India, glyphosate-tolerant cotton is not approved for cultivation but is being grown illegally on a large-scale. Otherwise, the weedkiller is used sparsely. Pritam Singh, a progressive farmer of Sonipat, Haryana, who produces wheat and rice seed on 117 acres, mainly for IARI, says he sprays just eight kg of glyphosate a year to remove weeds on the edges of fields. Milind Damle, a cotton grower of Yavatmal in Maharashtra, says it will cost him Rs 6,000 to remove weeds on an acre manually, whereas with glyphosate, he can do the job with just Rs 1,000.

India will need chemical pesticides, but these must be used judiciously. Information about them must be made available to farmers in the major languages on the lines of USA’s National Pesticide Information Centre. The use of pesticides harmful to bees must not be allowed during their foraging period. Integrated pest management must be practiced, and chemicals must be rotated and not sprayed repeatedly – to delay resistance. In the case of highly and extremely toxic chemicals, gloves and masks should be provided with the product. (B Venkateswarlu, former Vice-Chancellor of the agricultural university at Parbani in Maharashtra says highly toxic pesticides must be phased out early, given farmers’ tendency to ignore safe practices). The government must conduct third party studies and audits. It would help if a system of traceability were instituted so that the misuse of chemicals can be checked.

(Top photo of a cotton farm in Aurangabad, Maharashtra, being sprayed, by Vivian Fernandes).