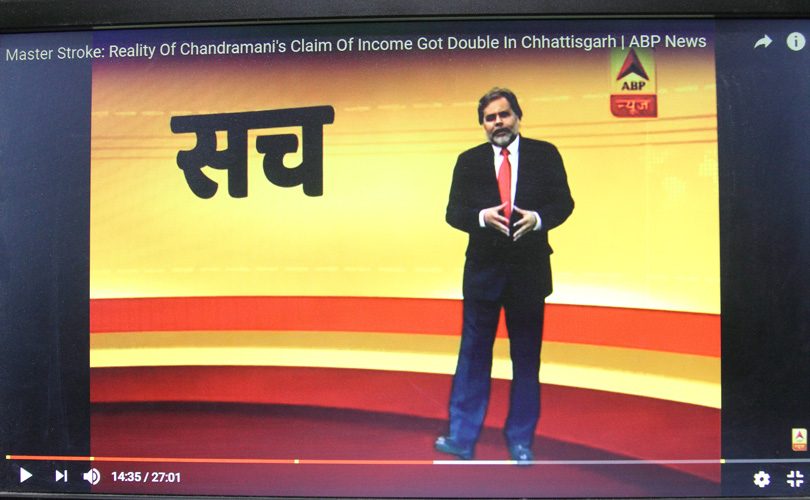 In a story published on 27 June, we said farmers were marketing props for Prime Minister Narendra Modi’s image-building exercise in an interaction by video conference which was broadcast on Doordarshan. One of the women who said her income had doubled was Chandramani Kaushik from village Kanhari in Kanker district of Chhattisgarh. She said she had two acres in which she grew paddy, unprofitably. But her income had doubled after she and other members of a self-help group had switched to growing custard apple or sharifa. They extracted the pulp which they sold to ice-cream producers.

One only heard inspirational stuff in the 90-minute interaction. Farmers had made good all because of various programmes launched by the PM.  But were the farmers tutored? Given below is an extract from a piece written by Punya Prasun Bajpai in thewire.com about the circumstances leading to his resignation from ABP News. Bajpai was the anchor of Masterstroke, a prime-time show on the channel.

“On June 20, Prime Minister Modi spoke to farmer beneficiaries of his various schemes through a video conference link. Right in front was Chandramani Kaushik from village Kanhari in Kanker district (Chhattisgarh). When the prime minister asked her about her income, she simply narrated how her income had doubled. The prime minister was happy to hear the bit about income doubling. He started beaming for the simple reason that he has kept 2022 as the year when the incomes of farmers shall be doubled. So on a programme that is live, if a farmer happens to talk about her income doubling, it is bound to warm the cockles of the prime minister’s heart.

“However, from the perspective of a reporter-editor, this incident was not so easy to digest.  Chhattisgarh itself is one of the most backward regions of the country, and Kanker district even more so – according to the official website of the district, it is among the most backward parts of the world. And if  from these parts a female farmer is saying her income had doubled, it was natural for us to send a reporter  to examine her claim.

Fourteen days later, on July 6 when the report was aired, we revealed how  the woman in question had been coached by officials from Delhi about what she was required to say to the prime minister and how she must say the bit about the doubling of income. In one blow, the report created a furore in Chhattisgarh, with many saying that the woman had been coached with an eye on elections [the state goes to polls in five months].

“The report gave rise to three questions: do officials do all this to keep the prime minister happy? Are people coached to lie because the prime minister wants to hear nothing but his praise? Do election victories hinge only on the publicity and propaganda machine? Whatever it may be, but the fact is that smarting from the report’s effect, the Modi government went on the offensive against ABP saying it was deliberately airing a programme that was nothing but falsehood. Three Union ministers including the I&B minister, put out virtually identical tweets, putting a question mark on the channel’s credibility.

“What was it if not pressure? It was clear to everybody. So when reporter Gyanendra Tiwari was sent to the spot again to file another report, the village presented a very different look.  The police was ensconced there. Senior officials of the state government had been sent there to ensure that the reporter was not able to reach Chandramani Kaushik. Call it the reporter’s ingenuity or the lack of integrity and discipline among the police and the officials to remain in their posts till late but they left the village during the day itself. Before night fell, the villagers and the 12-woman SHG group including Chandramani Kaushik broke their silence about how much more wretched their conditions had become.

“On July 9, following the telecast of this report, the ominous silence of the government was a clear indication that it would do something. That very night, one member of the channel monitoring team informed me over the phone that the latest report on Masterstroke had created an uproar in the government. The I&B minister has taken the ADG to task, asking him, as I was informed, “Did you not know that ABP would go ahead and air this report despite the ministerial tweets? … Had we known, we would have sent a notice beforehand so that they would have had to show us the programme before airing it.”

(Top photo of Punya Prasun Bajpai on the Masterstroke show about the truth behind the doubling of Chandramani Kaushik’s farm income,. Photo by Vivian Fernandes).