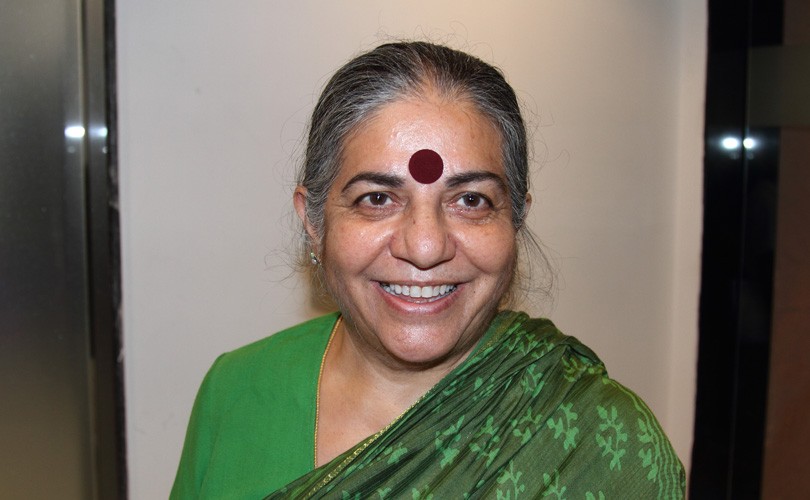 Vandana Shiva is as comfortable with the Swadeshi Jagran Manch as with Communists in opposing genetic engineering of plant crops, and corporates in agriculture. Marco Rosaire Conrad-Rossi dissects her eco-feminist philosophy and finds that it is no guide to the future as it romanticizes indigenous people and is quite sceptical of scientific inquiry.

“Once you peel back the layers of her thought, you find that she is a vicious opponent of modernism, suspicious of enlightened humanism, a wily eco-mystic who has more in common with religious fanatics than the progressive activists who are her main audience.”

This is how Marco Rosaire Conrad-Rossi describes the well-known anti-GMO activist Vandana Shiva, in Nodes of Science after reading her book, “Staying Alive: Women, Ecology and Development.”

The author finds the book which makes important “ecofeminist” statements “full of fallacies and creative interpretations of history ─ not to mention repetitive statements which inflated her message but did little to fortify it against obvious criticisms.”

Conrad-Rossi finds Shiva’s eco-feminism “is a profoundly conservative, if not reactionary ideology.” For her the major problems facing women, indigenous people and the environment have their roots in Europe’s move towards rationalism and scientific thinking.  That movement, according to Shiva,”turned woman and nature into passive objects,” which implies that “before this time everything was fine or at least much better”. The author does not find convincing the historical evidence Shiva has provided to prove this point.

Though Shiva claims to be walking in the footsteps of Gandhi she is not consistent like him. Gandhi was wary of modern technology. Shiva is a “total Luddite” but is happy to use computers, airplanes and cell phones. He finds the book painting an “overly romantic view of indigenous peoples and an idyllic past that never was.”  Shiva, according to him, does not believe indigenous people living in tribal society suffered from any kind of scarcity. Those who think they did should re-think their definitions of wealth.  Shiva thinks indigenous societies are good at satisfying basic and vital needs but may not be advanced in meeting non-discretionary ones. If that were the case why were now curable afflictions lethal before modern medicine was invented? the author asks.

Shiva believes India has been at the center of agricultural innovation and husbandry.  Developed nations are not more advanced; their “reductionist” thinking is tricking them into believing they are.  Shiva thinks  Indian women are more knowledgeable about agriculture than anyone else—and if those women are indigenous, then they are at the apex of agricultural knowledge. “Nowhere in Shiva’s work does the reader get the sense that knowledge is derived from experience, hard work, discipline, and education. Rather, knowledge is a product of identity, and the identity that she just so happens to see as the most knowledgeable are indigenous women from India; the fact that she herself is an Indian woman who romanticizes indigenous people—and how this may influence her own perspective—is not something she reflects on.”

The full review is here.