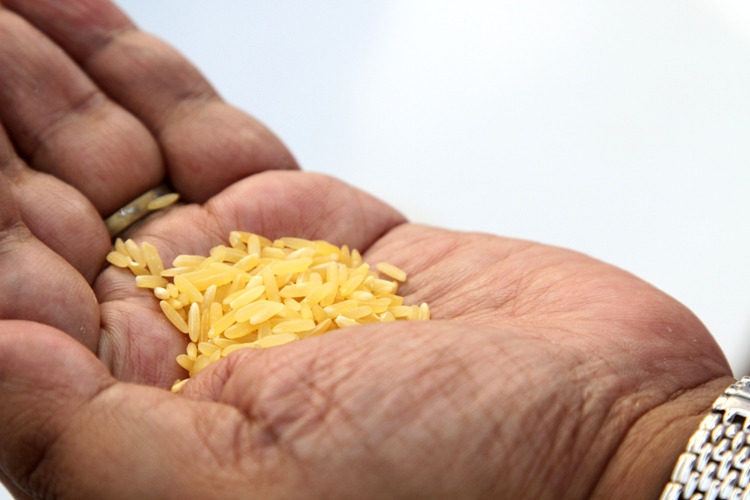 I remember my grandmother, a widowed smallholder farmer sowing ‘Ayarate,’ a newly-introduced wheat variety that was the talk of her village. It was the late 1960s or early 1970s. IR8 was a semi-dwarf and high-yielding variety which the International Rice Research Institute (IRRI) released in November 1966. The following year, Nekkanti Subba Rao, a progressive Andhra farmer tested it in his farm and supervised a large-scale field demonstration at the behest of the government. From those seeds came the Green Revolution in rice in India.

For a rice-eater like me visiting IRRI, near Manila in the Philippines, it was like a pilgrimage. The scientists were 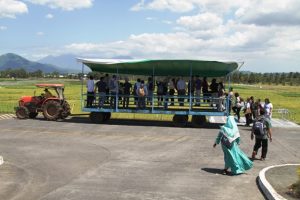 engaged in producing more rice to feed a rising global population and new converts to rice from Africa. They are also producing better rice that addresses micronutrient deficiencies – Vitamin A, zinc and iron- with conventional breeding if possible and genetic engineering, if necessary.  More and better quality rice had to be obtained from plants that are resilient to climate stresses and use fewer resources like water.

“There is a wrong perception that rice needs a lot of water,” IRRI says defending a crop that is indicted for groundwater depletion in north-western states like Punjab, where it is grown mainly for consumption in other states. Punjab contributes in excess of 80 percent of its rice production to the central public distribution pool. It grows rice on three million hectares. That very much coincides with the area irrigated by its tube wells ─ 2.94 million hectares. The pumping out of water in excess of the recharge rate has resulted in groundwater depletion in 70 percent of central Punjab, the state’s Economic Survey says. 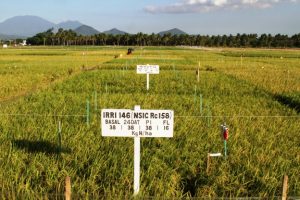 A bunded rice field at IRRI that has been continuously underwater since 1962.

“The conventional practice of rice production is bundled with the perception that rice needs to be flooded for most of the time.” Rice can survive in anaerobic conditions because of a kind of cells which pass on oxygen to roots IRRI said in response to emailed questions sent after recorded presentations of its scientists and interviews were accidentally lost. The visit to IRRI was part of a week-long programme on the status of genetic engineering of crops in East and South Asia, to which CropLife Asia, an industry body had invited me at its expense.

Should groundwater use for cultivation of rice be discouraged? If the aquifers are well-connected and rechargeable pumping of groundwater is one of the good approaches to capture water from rain and rivers which otherwise ends up in the sea. But how much water can be pumped out? According to IRRI, that depends on the type of aquifer and the recharge capacity which in turn depends on the source of recharge and the properties of the sink.

IRRI says the use of groundwater allows rice farmers to make decisions about sustainable water management; they lack such autonomy with, say, canal water systems. So instead of discouraging rice farmers from using groundwater, they should be educated about the benefits of precise water management. Efficient irrigation scheduling (like alternate wetting and drying) not only shrinks the use of water but also the carbon footprint by reducing emissions of methane, a greenhouse gas, from bunded fields or paddies. Incentivising farmers with carbon credits can encourage them to use groundwater efficiently, IRRI says. (In Punjab where electricity is free there is little incentive to conserve groundwater). 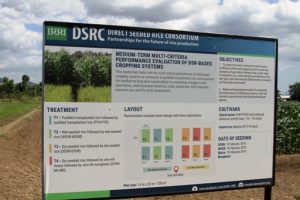 When rice is grown under aerobic conditions, like Direct Seeded Rice (DSR), a saving of about 12-35 percent of irrigation water is reported, IRRI says. Direct sowing can be done in dry or wet conditions by broadcasting the seeds on ploughed but dry fields, planting them in rows with seed drills or using these methods to plant germinated seed in wet fields (known as wet DSR).

According to IRRI, DSR is widely practised in many south-east Asian counties like Malaysia (about 95 percent of total rice area), Cambodia (85-90 percent), Vietnam, Thailand (about 70 percent) and the Philippines (42 percent).  In South Asia, Sri Lanka leads with 95 percent or rice area under DSR.

The Punjab and Haryana governments are promoting DSR to relieve groundwater stress. Punjab Agricultural University (PAU) has developed a package of practices for DSR and has recommended the ideal rice varieties for it. P.C.Sharma, Director of the Central Soil and Salinity Research Institute (CSSRI), Karnal, says in DSR there is a reduction in rice yield of 5-7 percent. But this is compensated by saving in energy cost and higher yields in the subsequent wheat crop if zero-till agriculture is practiced and paddy stubble is left to degrade in the fields. But farmers, he says, are fixated on yield and do not look at total cost savings. Also, current rice varieties are designed for flood irrigation; rice varieties suitable for direct sowing need to be developed.

IRRI is working on more nutritious rice: High iron and zinc rice (HIZR) and Golden Rice with beta carotene to cure Vitamin A deficiency. While zinc and rice are present in rice, the levels need to be increased to have an impact on health. Conventional breeding helps, but genetic engineering ensures a significant increase.  It also allows stacking of multiple traits in a single variety. 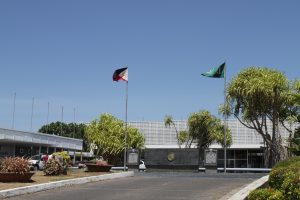 Together with Chinese scientists IRRI has identified the genetic make-up of over 3,000 rice varieties. The 3000 Rice Genome Project is being used to map the genetic regions influencing the glycaemic index and texture of rice. The results of the study, it says, will be critical to develop low glycaemic index rice varieties which can healthier options to rice eaters who are wary of diabetes.

Golden Rice is currently undergoing regulatory review in Bangladesh and the Philippines. It has received positive food safety assessments from Food Standards Australia (FSANZ) Health Canada and the Food and Drug Administration of the United States. IRRI has engaged in the regulatory approval process.  It says it reaches out to farmers, community groups and NGOs but avoids those who cannot be convinced with facts and evidence. 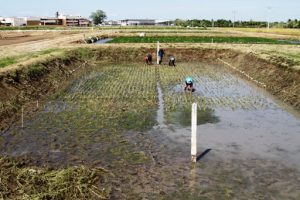 come as a relief to farmers in the flood-prone areas, whose productivity is low and unstable. The Sub1 gene was discovered in a traditional Odisha rice variety grown in Balasore where flash floods are common. It was incorporated in the Swarna mega variety grown on five million hectares in eastern India and released in 2009. With the gene, the plant can remain completely submerged in muddy water for 7-10 days and in clear water for up to 14 days, says S R Das, rice breeder and Honorary Professor at Orissa University of Agriculture and Technology.

While underwater the plant remains dormant. When the floods recede, it uses conserved carbohydrates to regenerate.  Swarna and Swarna Sub1 are alike in all respects, except that the latter can survive flash floods. IRRI says the average yield of scuba or Sub1 rice varieties is 4.5-6.5 tonnes per hectare and the yield advantage is 1-3 tonnes per hectare over those that don’t have the Sub1 gene.  Seven varieties with the gene have been released in Asia.

Another interesting gene isolated from the Pokhali rice variety grown in coastal Kerala is the Saltol gene which makes rice salt tolerant. Rice productivity in salt-affected areas is about 1.5 tonnes per hectare. IRRI says it has developed about 100 salinity tolerant elite lines which have traits like high-yield, good grain quality and resistance to pests and diseases. They are ready for testing in farmers’ fields. It has released 34 salt-tolerant varieties across Asia.

(All photos on this page by Vivian Fernandes. Top photo of Golden Rice in the palm of Reaz Ahmad, Executive Editor, Dhaka Tribune, April 2019).