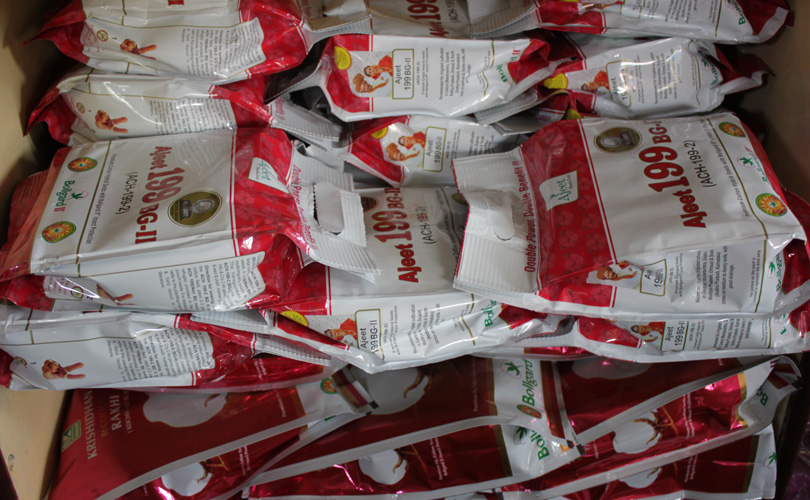 In this interview with Vivian Fernandes, K R Kranthi, Director of the Central Institute of Cotton Research, explains why India must claw back some of the acreage under cotton hybrids and Bt seed companies must practice forbearance.

I recall you saying elsewhere there are too many Bt cotton hybrids:  One thousand six hundred and sixty seven Bt cotton hybrids have been approved. That’s far too much. They create confusion. The choice for the farmers is huge.  After 2006-07, the floodgates were opened. All of a sudden a lot of hybrids were released.

Is it possible the hybrids have local variations? There is not much difference between hybrids and barely any between new and previous ones.

The first cotton hybrid in India (indeed the world) was in 1971. In thirty years there were hardly forty hybrids. They were released after intensive scrutiny and evaluation. As a rule every hybrid would have its own package of practices. The farmer would know what to expect from a hybrid.

Surely, there would be some areas suitable for hybrids? Hybrids are not a good idea for the whole country. I will not oppose them  in areas that have irrigation, check dams, etc. You can grow them in Gujarat, parts of Andhra, Karnataka and Tamil Nadu. Punjab should not get into long duration cotton hybrids because of the cotton-wheat system. Cotton is grown after wheat and if the cotton season extends it pushes back wheat sowing, which in turn will delay sowing of cotton and make it susceptible to the leaf curl virus. Hybrids may be good for forty to fifty percent of the area.

Are there good hybrids for rain-fed areas? There are. Some companies have done a very good job. Mahyco, Ankur and Nuziveedu have some very good hybrids. I am not sure whether these companies deliberately did a plant breeding job for (rain dependent) Vidarbha.

What kind of varieties or hybrids are suitable for rain-fed areas? For Vidarbha they should be early maturing. If farmers succeed in sowing early, they win the battle.  If I take a late maturing variety, even if sown early it extends into October. That is when boll formation starts and cotton needs more water. If there is moisture stress yields will be affected.

In Vidarbha boll worms come in September. On 5th September, to be precise. I am an entomologist by training and I should know. They cannot come earlier because they cannot survive the monsoon. The eggs will be washed off.

If you want about one hundred flowers in a plant, they will happen over sixty to eighty days and on all those days you are inviting insects. The average number of insecticide applications used to range from eighteen to thirty.

What are you recommending? In the rest of the world the flowering window is just fifteen to twenty days. This is because of mechanization and machine pickers. The plants cannot spread as they will break and impede the machines.  They cannot be more than one metre tall and two feet wide. So they must be densely planted with a population of at least 1.1 lakh plants per ha. India’s density is a tenth of the international norm. In high density you expect plants to give four or eight flowers per plant as against forty to eighty flowers per plant in a hybrid. The bolls on the high density plants mature at one time. Plant protection becomes easy.

High density is the way to go? Absolutely, I have no doubt in my mind.  Whatever said and done India must move towards it.  The only problem is we are saturated with hybrids and the seed is expensive, so can we take to high density with hybrids? is a question.

You cannot do high density with hybrids because they are expensive? They are expensive and why hybrids? Out of eighty cotton-growing countries, seventy-nine are growing varieties — compact high density.   Eight or nine are growing Bt varieties; the rest non-Bt varieties. In Brazil, more than seventy-five percent of the area is under non-Bt varieties but still their yields are three times that of India.  And Brazil is a hundred percent rain-fed country for cotton.

We do not need Bt at all? Bt is a good technology. If I had Bt in my varieties…

Is that what you are going to do now? That is right with this agreement signed with Delhi University.

Will there be some competition now? This gives us a fairly good handle because private technology providers are not willing to put their gene into varieties.  Our main aim is to bring the gene into some of our best elite varieties and give the farmers an option. Currently, they have to cultivate hybrids whether suitable or not .

How long will it take to commercialize it? In the next three years we should be able to come out with a parallel product both in varieties and hybrids.  There are good public sector hybrids. I am not against hybrids.

You are going to have stacked genes too?  One Cry1aC has been provided by Prof Pental (of Delhi University), second there is a gene called CryII aax1 which is being developed by Tamil Nadu Agriculture University. It has a patent. We will be signing the MoU very soon. The MTA (material transfer agreement) has been prepared. There are these protease inhibitor genes (which are anti-feedants to pests). The plants have been developed by National Botanical Research Institute, Lucknow. Some material is also available with various other public sector institutions. Our time starts now.

Reverting to high-density planting why are you not propagating it? We are into it. This is my fourth year.

Why don’t you do demos? We are doing it. But how many demos can you do in a country like India?

Why did the public sector not come into Bt so far?  See, nowhere in the world has the public sector been successful in beating Monsanto in the game.  Monsanto spent 2,850 cr as seed money in 1981.Which was one billion dollars then. Now you cannot compare that with the Rs 2 cr budget which CICR got. Monsanto hired 800 post-doctorate fellows in the US over a period when they were developing Bt. That was the intensity.

China? China is probably the only country…

Is it its own technology? I would not want to comment on that.

I get the sense that you are not terribly excited about Bt. Bt is a good technology.

Bt has helped, you say? Yes, no doubt

As an entomologist you are saying that?  Yes.

Bt has got a lot of bad press. With the public sector getting in will there be more acceptance? Even now there is acceptance. Bt cotton as a product has had a huge amount of acceptance because of the terror created by boll worms.

I am talking of the media, the activists. There has been a lot of miscommunication and misapprehension on Bt. There has been a little bit of science and a lot of rumour.  I will focus on science which tells us clearly that this technology is good because there is a trade off. What am I comparing pest management with? With dastardly insecticides or this technology? Which is causing more harm? Besides, so far there is hardly any scientific evidence that Bt cotton is actually not good. Farmers are trusting it.  The activists are opposing it because of the commercial aura which surrounds the technology.

(Top photo: Bt brands in a shop on way to Yavatmal in Vidarbha. By Vivian Fernandes on 18 June, 2015)