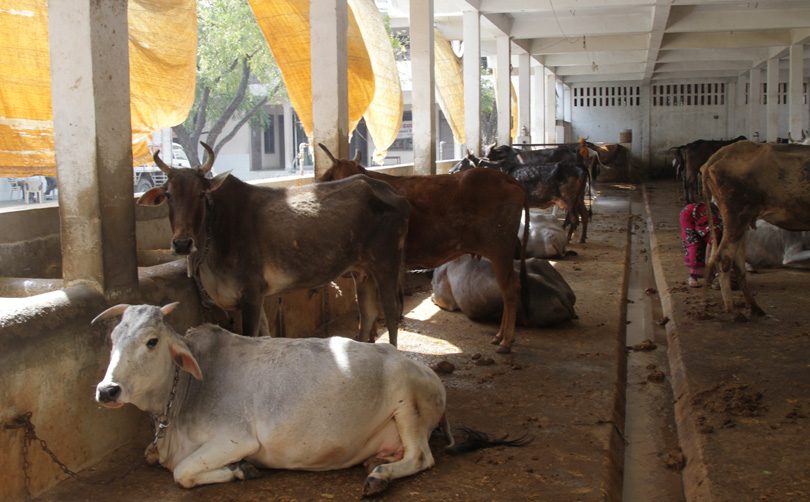 In this concluding report of a three-part series, Vivian Fernandes says farmers have resorted to culling to reduce the number of non-utilitarian male cattle. They have also invested in buffaloes whose trade and slaughter is not allowed. Will restriction on trading in cattle, accentuate the trend?

The random and at times lethal violence by gau rakshaks or cow vigilantes on cattle traders in north India, with the tacit or active connivance of the police has seized up the cattle trade, despite not being prohibited. The livestock economy is being damaged. Dairy farmers used money from sale of cattle of no economic utility to buy cows. That cycle has been interrupted.  The preference for buffaloes is likely to get accentuated, as their culling is permitted, and the cow belt might become buffalo country.

The population of cattle ─ cow and its progeny – though higher than that of buffaloes, is declining. It had fallen from a peak of 205 million in 1997 to 191 million in 2012─ slightly less than their number in 1982. The buffalo population has increased from nearly 90 million in 1982 to 109 million, thirty years later.

Buffaloes need less maintenance. They are sturdy. Their milk being more fatty fetches a higher price and it has higher nutritional value.

Though farmers are emotionally attached to their animals, and revere the cow, the cost of maintaining unproductive animals outweighs the psychic benefit. The cattle trader relieves them of the economic burden though farmers know the parted animal could end up on someone’s plate.

The share of males and females should be equal, but the higher number of females shows that culling is being practised to conserve feed and fodder, since males have little use in agricultural operations. The share of cows among cattle has steadily increased from 49 percent in 1987 to 64 percent in 2012.  In buffaloes the trend is more pronounced. The share of females has risen from 79 percent to 85 percent between 1992 and 2012.

If culling cannot happen, the population of stray cattle will shoot up. The 2012 livestock census which counted them for the first time, found 5.29 million let loose. (There was no survey of stray buffaloes. Perhaps their numbers did not warrant one). Odisha, Uttar Pradesh and Rajasthan had about a million each.

Loose cattle will pose another risk to farmers, who have to cope with erratic weather and volatile prices. It costs Rs 100-120 a day to maintain a head of cattle, says Tarun Shridhar, Secretary in the Department of Animal Husbandry, Dairying and Fisheries.  The country is short of green fodder by 40 percent, of dry fodder like paddy straw by 30 percent and of protein-rich concentrate (like de-oiled cake) by 40 percent, says Ashok Pande, Senior Vice-President of BAIF Development Research Centre. Bharatiya Agro Industries Foundation, as it was previously called, was set up in 1967 in Pune by Manibhai Desai, a follower of Mahatma Gandhi, to improve the milk yield of indigenous cows, most of whom are non-descript (of no-defined breed), by crossing them with exotic breeds (Jersey and Holstein Friesian) or indigenous ones like Gir, Sahiwal, Tharparkar and Red Sindhi though artificial insemination.

Pande says his foundation has no plans to set up cattle shelters as its mandate is to improve the quality of cattle and buffaloes, not to maintain unproductive ones. He says the use of sex-sorted semen for artificial insemination of cows, can result in female calves being born 90-92 percent of the time. The government is serious about this, he says; it has set up 10 centres to produce it.

The foundation produces 13 million doses of semen (not sex sorted) for artificial insemination annually, of which it uses five million at its 5,000 breeding centres across the country. These cost Rs 150 each. (The government sells a dose for Rs 50) These result in pregnancies 48 percent of the time; there is an 80 percent chance of calves being delivered – males and females in equal ratio.

Sex-sorted semen is expensive. It costs Rs 1,200 per dose and 2.5 of them are needed on average to result in a pregnancy. A farmer might find it preferable as the cost of maintaining an unwanted male calf for six months is about Rs 4,000 according to the foundation’s estimate. The government can subsidise it.

The government is also promoting Gokul Grams under the Rashtriya Gokul Mission whose mandate is to preserve and improve native breeds.  Ten of them have been set up .The idea is to develop a model where unproductive animals can pay for their upkeep with products made from cow dung (like vermi-compost) and cow urine. “Gokul Gram,” cautions Mihir Kumar Singh, Joint Secretary in the animal husbandry department, “is an economic model. The challenge is to convince the farmers that male cattle, and cows are not unproductive after they cease lactation.”

Pande is impressed with a gaushala set up by the Miraj Group at Nathdwara near Udaipur. It produces vermi-compost of a very high quality that retails for Rs 8,000 a tonne, he says. Gas produced from dung is compressed, bottled and used in-house. Laxmikant, its manager, says it has 1,560 bulls and cows but the waste they generate does not pay for their upkeep.

“Long term solution is sex-sorted semen but it will also result in the problem of old cows,” says Shridhar.

The government should club cattle of exotic breeds with buffaloes and allow them to be culled, says Narayan Hegde, Trustee of BAIF Development Research Foundation, since they are not revered like native cattle.  The share of exotic and cross-breds in the total cattle population is not large, though it has increased from nearly 17 percent in 2007 to 26 percent in 2012. What is the country to do with the large number of indigenous cattle that do not or have stopped giving milk? They should be exported, Hegde says.

These are inadequate solutions to a manufactured crisis. Ultimately, there is no getting away from past practice. The cattle trade might morph and go the way of prohibition in Gujarat, with the vigilantes running protection rackets.

(Top photo: A well-managed Gaushala, run by a trust, at Bauti in Kanpur.  Photo by Vivian Fernandes)