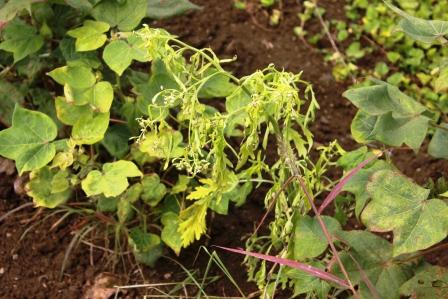 The Delhi-based South Asia Biotechnology Centre (SABC) has found evidence of cultivation of illegal herbicide-tolerant cotton in central and southern India. In a letter to the Genetic Engineering Appraisal Committee (GEAC), it says the practice is “rampant.” Based on conversations with wholesalers and seed dealers, it estimates that 35 lakh packets of 450 grams were sold during this year’s cotton-growing season, up from 13 lakh packets last year and 8 lakh packets the previous year. Hybrid seed production takes time, hence the surge in sales this year, Bhagirath Chowdhury, Director of SABC said. Both registered and unregistered seed companies were engaged in the trade, he added, including a well-known one.

A brand of herbicide-tolerant cotton found by SABC.

The marked price ranges from Rs 1,200 to Rs 1,500 a packet ¬ higher than the government prescribed price of Rs 800 for Bt cotton. SABC says the illegal trade was worth Rs 472 cr this year. This may be an overstatement as there is acute competition in Bt cottonseeds and they are seldom sold at the marked price. But it seems to be a sizeable business.

Officials are aware of the illegality. SABC obtained a 7 February report of the Central Institute of Cotton Research (CICR), Nagpur. Of nine hybrids it tested, six tested positive for RRF or Roundup Ready Flex, which is tolerance to Monsanto’s brand of glyphosate. An agricultural cell of the Telangana government also found the trait in a sample of Kamadhenu brand Bt cottonseed.

“Agriculture is a state subject. States have laboratories (for testing). It is difficult for me to comment to what extent there is cultivation of HT cotton,” said V N Waghmare, who took over as Director of CICR in September. “Whosoever is cultivating it is illegal. Bio-safety procedures have to be followed,” he added.

CICR entomologist Vishlesh Nagrare was reticent. “I have heard like that,” he said when asked whether he was aware of the tests that CICR had conducted. He said a colleague was dealing with Bt cotton but she was on child leave.

This one falsely claims the herbicide-tolerant cottonseed is of Israeli origin. All photos in the text courtesy SABC.

In a report on 24 July from Hyderabad, Business Standard newspaper reported about the practice. It quoted an official of Telangana’s agricultural commissionerate who had cautioned farmers against buying cottonseed without invoices. The farmers told him they were aware of the risk of crop failure but they were happy with the seed as it saved on weed removal cost. Yields were also high, they said. The official told the newspaper that farmers were usually secretive as they risked time in jail if they grew GM crops illegally.

“I am hearing it is being grown here and there and in the entire country.  But we need a report. Decision should be taken by Government of India.  We do not have any role to play in the state government,” said T Keshavulu, Director, Telangana State Seed Certification Agency.  He said a “preliminary” meeting on herbicide-tolerant cotton was held, but he did not have a report. When told that the state’s own laboratory had found a Bt cotton brand called Kamadhenu testing positive for herbicide tolerance, he said he “did not know how they are doing it  because there are no protocols for testing” as the trait is not approved for sale in India.

But another official of the Telangana agriculture department, who did not wish to be named, said two meetings were held by the Principal Secretary, Agriculture with state agriculture universities, bio-technologists, seed certification agencies and seed companies. A meeting with seed companies which is normally held in November has been advanced to October. They will be told to submit their production plans. The government has decided to inspect their production plots thereafter. “We will test leaf samples and send a report to the central government.”

The official said traders from Gujarat were selling herbicide-tolerant Bt cotton seeds “in white cloth bags” in ½ kg and 1 kg pack sizes. He admitted there was a rise in sale of glyphosate, the weedicide to which HT cotton is genetically programmed to resist.  “First they spray on 3 or 4 plants and if they are not affected they spray it on the rest of the crop,” he said.

Gujarat’s Principal Secretary (Agriculture) forwarded SABC’s representation which this website had emailed him to the Director, Agriculture, B K Modi, who said “We will lift samples. I have told the quality control guys to lift samples from unsold stocks of Bt cotton seed. First I will have to establish herbicide tolerance.”

Amita Prasad, Chairperson of Genetic Engineering Appraisal Committee (GEAC) sought a list of questions from this website when asked what action it was contemplating. In 2001, when illegal Bt cotton seed was sold, GEAC had ordered the crop to be destroyed but the Gujarat government did not risk the anger of farmers and took no action.  This story will be updated with Prasad’s response, when received.

In August last year, Mahyco withdrew its application for approval of RRF Bt cotton. It had completed the bio-safety tests, but feared that if approved, the patented technology would be grabbed by seed companies under another law meant to protect the rights of breeders and traditional farmers. In the process of asserting its intellectual property rights it did not want to be bogged down with litigation.

There is little point in blaming farmers for growing herbicide tolerant cotton illegally.

Modern agriculture is impossible without herbicides. Europe, which leads the campaign against GM crops, sprays them liberally.  A Reuters report of 14 September, said French and German farmers had jointly called on European governments to renew the license for glyphosate weed killer, saying there was no evidence it was toxic and banning it would severely harm farming. The weed killer’s license is due for renewal in the EU at end of the year.

Even conservation farming which is supposed to be kind on the environment, would be impossible without weed killers. In low-water use direct seeded rice, post-emergent weed killers have to be applied.

An NSSO survey report of agricultural households released in December 2014 said wage costs were a fifth of the total average cost of production at an all India level, next only to that of fertilizer. Demand for agricultural labour tends to get bunched up during sowing and harvesting. Workers are not easily available at those times.  The black cotton soil of Maharashtra and Madhya Pradesh turns slippery after rains. It is difficult to move in the fields. Weedicides are an efficient option.

The planting of illegal herbicide tolerant cotton is a governance failure fraught with consequences. Seeds with attenuated potencies can help bugs and weeds develop resistance faster. Their unauthorized and illegal sale is unfair on those who  develop the technology, abide by the law and go through the grind of conducting bio-safety tests and obtaining regulatory approval.

The Federation of Seed Industry of India (FSII) has in a press release demanded “strict action against perpetrators.”  M Ramasami, Chairman of FSII and Managing Director of Rasi Seeds said: “Such unauthorised sale of cotton seeds with unapproved technologies can put our farmers at possible risk of significant farming losses” as they will not have recourse to compensation from insurance companies. FSII is a break-away group formed by some seed companies after the National Seed Association of India campaigned against patent rights for seeds with genetically-modified traits and called for price control on Bt cottonseed, including a cap on trait fees.

Another version of this report was published in the Financial Express.