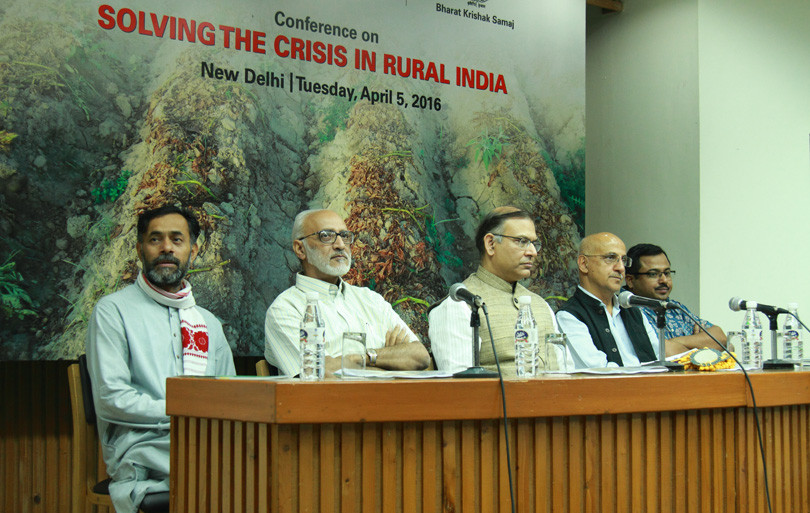 From market sceptics to market votaries there was unanimity that farmers should be assured a minimum income, reports Vivian Fernandes.

Between speakers ─ economist, socialist, communist and activist ─ there was agreement that there should be income support for farmers, but they differed on the methods at a seminar on ‘Solving the Crisis in Rural India,’ organized by Bharat Krishak Samaj in New Delhi on 5 April.

Acknowledging the distress of farmers, Minister of State Jayant Sinha said his finance ministry had virtually become the agriculture ministry. The government had therefore set the goal of doubling the income of farmers by 2022 because ‘what you count, counts.’  He said its programmes on crop insurance, irrigation, soil health, rural roads and agricultural diversification to dairy, poultry and horticulture were efforts in that direction.

While the key challenge is to raise agricultural productivity, it had been complicated by climate change which has disrupted age-old farming practices, Sinha said.

Agricultural economist and former chairman of the Commission on Agricultural Costs and Prices, Ashok Gulati was scathing. Agricultural growth, adjusted for inflation, averaged four percent annually in the Eleventh Plan which ended in 2012, against less than half a percent growth (0.45 percent) averaged in the last two years. Considering that population was growing at 1.4 percent a year, farmers were worse off than before. The profitability of crops had declined from 20-30 percent during the Manmohan Singh government to around five percent or even less.

It is not clear, Gulati said, whether the government wanted to double inflation-adjusted or unadjusted income. If the latter, Manmohan Singh’s government had achieved it in five years during its second term. So what arrow have you shot, he asked, using a Hindi colloquialism. If real income was to be doubled, growth would have to average 12 percent a year for six years and that was quite difficult.

Gulati said the government would have to invest in new-gen seeds and extend irrigation.  The budget outlay for irrigation would have to be vastly increased. The new crop insurance scheme would not be the weather shield it is touted to be without technology like drones being deployed for quick assessment of losses. A ‘science-based system was needed,’ he said.

Diversification of agriculture could not be only at the farm level, it had to be across the value chain, so farmers got a higher share of the value which consumers paid.

Agriculture policy is production focused, Gulati said. It should also focus on markets.

Harsh Mander spoke largely about landless agricultural workers, a constituency which farmer leaders ignore. He called them ‘hunter-gatherers of work,’ using a term coined by Jan Breman, a Dutch sociologist. A former IAS officer who quit protesting the Gujarat government’s handling of the 2002 riots, Mander is an activist for social justice. The audience of farmers may not have agreed with some of his prescriptions like fortifying MGNREGA, the rural jobs scheme, to alleviate rural distress, as it means raising rural wages. He also had touching faith in traditional agricultural which shuns chemical fertilizers and pesticides. But his call for guaranteed per acre payment to farmers progressively declining with increase in holdings, should find resonance among policy makers because it is a non-trade distorting way of subsidizing agriculture and is being applied in the United States.

Prasenjit Bose, who headed the CPIM’s research cell till he was expelled for opposing its support for Pranab Mukherjee’s presidential bid said direct income support was not possible in India because of the large number of farmers. He voted for the existing system of procurement through the Food Corporation of India (FCI) at higher minimum support prices, despite Gulati pointing out that more than 40 percent of the grain procured was lost to corruption and FCI’s head load workers were paid an average of Rs 70,000 a month (some even get Rs 4 lakh a

month), which meant inefficiency on a gargantuan scale.  Bose called for a hike in minimum support prices to incentivise farmers into higher production while increasing taxes on the rich (in India’s context, the salaried) to subsidise poor consumers.

Yogendra Yadav supported ‘legally-guaranteed minimum income assurance’ to farmers, whether through income or price policy and also a tax on agricultural income above, say, Rs 1 crore a year.  From being production oriented, agricultural policy should be producer oriented, the expelled founder of the Aam Aadmi Party asserted. He did not quite agree with the UPA and NDA governments’ focus on urbanisation, which he believed, was a ploy to force farmers off agriculture so companies could take over. Much of the fertilizer subsidy, which goes to producing companies, could be saved if organic farming were extensively adopted.

A leader of Swaraj Abhiyan, Yadav said farmers were in distress because the government was not scared of them. Unity among farmers is the weakest since Independence. Their plight would not improve until they were capable of inflating pain on city dwellers.

Farmer leader Satnam Singh Bheru reminded his audience that the ruling party had gone back on its promise to increase minimum support prices to ensure 50 percent profitability, as suggested by the M S Swaminathan committee. It had told the Supreme Court in response to his petition that the recommendation could not be implemented.

There indeed is a slip between promise and practice. As Gulati said: mere slogans will not help.