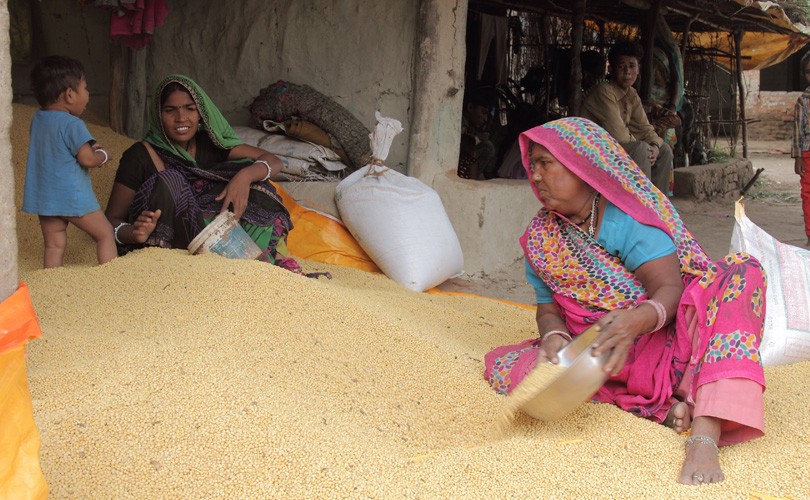 Soybean output has been plentiful this year but depressed prices and little soymeal offtake in the export market will mute the cheer, reports Vivian Fernandes from Bagli tehsil in Madhya Pradesh.

After two years of bad crop, Deenabai Rathod is quite pleased that she has harvested 50 quintals of soybean this year. Her delight is obvious; last year owing to poor monsoon she reaped just six quintals. But prices have dropped to around Rs 3,000 a quintal. Last year, she got Rs 3,300 plus a bonus of Rs 80 per quintal from the farmer producer company, of which she is a leading light.

Squatting on the floor with neighbours, Deenabhai is keen that we do the math. Her biggish house by village standards accommodates nine members. Chandupura in Bagli taluk of Madhya Pradesh’s Dewas district is a ugly cluster of tribal houses on either side of a cement concrete road with puddles of stagnant water, the overnight rain exacerbating the dampness.

Deenabai jogs her memory for expenses she has incurred and we arrive at a figure of Rs 61,000 or Rs 1,220 a quintal, which excludes the cost of family labour that has gone into the 90-day soybean crop, and the rent she would have got had she leased out the six-bigha plot (1.2 ha). She also has three more bighas under the crop. She got that plot in exchange for a loan of Rs 40,000.It is hers till the borrower repays.

The cost does not include interest on loans. Deenabhai’s husband and mother have taken two crop loans of Rs 50,000 each from banks, she has borrowed Rs 35,000 from the self-help group of 19 women, of which she is a member, and Rs 40,000 from a cooperative bank for agri-inputs. She cannot recall a time when her family has not been in debt. But the debt burden is lighter now. She pays 1.5 percent a month for the crop loans; trader-moneylenders used to charge double the rate. Self-help groups linked to banks have helped cut dependence on moneylenders and restored dignity. ‘We do not have to bow before anybody,’ Deenabhai asserts.

The year 2012-13 was the best for soybean. Production was a record 14.67 million tonnes.  India’s average yield was 1,353 a hectare. The next three years saw poor harvests. Last year was the worst of them. National output dipped to 8.5 million tonnes. Advances estimates for this year place the production at 14.2 million tonnes. The downpours during harvest time in Maharashtra’s Marathwada region sparked fears of widespread crop loss. Prices spiked.  But V S Bhatia, Director of Indore’s Indian Institute of Soybean Research says only about five percent of the crop has been damaged.  In the Indore spot market, the price is around Rs 3,000 a quintal. Last year around this time, it was Rs 3,800.

‘Soybean is a beautiful crop,’ gushes Bhatia, who has been researching it for 30 years. ‘All the leaves fall off in one go, when ripe. It is a literally a golden crop.’

Bhatia does not like comparisons of Indian yields with those of Brazil and the United States. There the crop is of 140-160 days, he says, while in India the most popular 9560 variety matures in 85 days.  This year’s likely yield of 1,200 kg a ha (double that of last year) is half that of the countries cited earlier, but those crops are also of a longer duration.

Moreover, Indian soybean is entirely rain-fed.  Only 0.6 percent of the area is irrigated. Yields vary with the quantity and distribution of rain. Last year there was no rain for 25 days after sowing and the crop withered. Soybean can withstand moisture stress of 15 days.

Venkat Mayande, Vice-chancellor till 2012 of Panjabrao Deshmukh Agricultural University, Akola  is of the view that soybean depletes the soil because it is high in proteins (42 percent) compared to pigeonpea’s 24 percent and also has a fairly high oil content.  Soybean, in that sense, is both a pulses crop and oilseed. But Bhatia does not quite agree. Soybean need potassium and micro-nutrients,she says. But it also absorbs atmospheric nitrogen and stores it as nodules in soil. Overall, it enriches the soil rather than depleting it.

But the world is awash in soybean. The United States Department of Agriculture estimates this year’s production at 333 million tonnes, nearly 3 mt more than last year. According to the Commission on Agricultural Costs and Prices, soyoil was quoting at Rs 6,152 a quintal domestically in the last quarter of 2015, while internationally the price was Rs 4,439. The respective price for soymeal was  Rs 3,351and Rs 2,146. The Soybean Processors Associations expects India to export 0.9 million tonnes of soymeal this year vs 4.35 million tonnes in 2012-13.

The institute has estimated at the soybean cultivation is not viable below Rs 3,000 a quintal. Bhatia urges a duty hike on imports for the sake of soybean farmers, most of whom are smallholders.

Since soymeal is high in protein, has almost all the vitamins, is rich in minerals and has health-boosting isoflavones, Bhatia is keen to encourage domestic consumption. But Indians do not like the soybean flavour, which is due to lipooxygenase enzyme. This has four isotypes. The institute has been able to remove LOX2, which is largely responsible for the beany flavour.