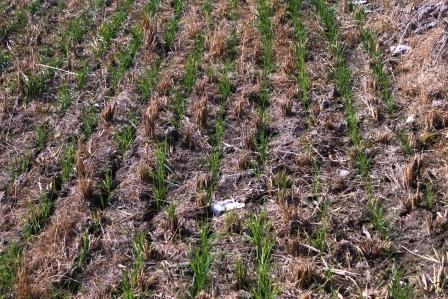 Bayer is rewarding farmers in some US states with $10 per acre for following low-carbon farming practices while Indigo Ag got seven companies to commit $20 per tonne of CO2 equivalent sequestered in soil this year, reports Vivian Fernandes

Agriculture contributes significantly to greenhouse gases (GHGs), so can farmers be incentivised to cultivate in a less earth-warming manner, with tradable carbon credits giving them an additional source of income?

Bayer, a company specialising in seeds and crop protection products, says it is rewarding about 1,200 farmers in Brazil and the United States with half a million acres between them for climate-smart practices like no-tillage farming, precision nitrogen use and cover crop planting. It is paying these farmers $10 an acre.

Indigo Ag, a US company, has taken the lead. It announced mid-October that seven companies, including Boston Consulting Group, Shopify, Barclays, JP Morgan Chase and IBM had agreed to pay $20 per tonne of carbon dioxide (CO₂) equivalents sequestered in soil or abated during the 2020 growing season. For the 2021 season, it has invited cereal-growing farmers from 21 US states to enrol. It is offering them at least $10 per carbon credit; the rate could rise if there is higher demand for credits. To earn them, a farmer must log into Indigo’s website with their farm coordinates and send a set of readings at regular intervals. This and soil data will be analysed. After independent audit, the verified carbon credits will be sold. A farmer could earn 2-3 credits or at least $20-30 per acre which will vest in them over 10 years. Since US farms are of a few hundred or a few thousand acres, the earnings can be sizeable.

“Great progress we have made with corn farmers,” Liam Condon, President of Bayer’s crop science division said at the annual ‘Future of Farming’ event which was held online this year mid-October. “We will have results from Brazil and the US this year and from Europe next year and then we will be trying to convince politicians,” he said.  “It has to be science-based and it has to be verifiable. It is pretty complex and it is work-in-progress. It can massively change farming and our approach to mitigating climate change.”

In India, Grow Indigo, a joint venture formed in 2017 between a subsidiary of Mahyco, a Maharashtra-based pioneer in the seeds business and Indigo Ag is taking a shot at impounding carbon in soil. It’s testing its concept in about 1,000 acres in Punjab, Haryana and parts of Maharashtra. These farms are geo-tagged. They will be monitored using remote sensing for regenerative farming practices like not burning paddy straw and stubble, adopting no- or low- tillage practices, rotating the crops and conserving water. The soil’s carbon content will be measured at the beginning and end of the crop cycle.

Farms which produce rice and wheat with a lower carbon footprint will be geo-tagged, so that their produce gets purchase and price preferences from those who want to promote lower carbon agriculture, says M L Jat, agricultural scientist with CIMMYT, the Mexico-based international maize and wheat improvement centre, which has signed a MoU with Grow Indigo.

To measure carbon sequestered or abated benchmarks have to be established based on CO2 equivalents generated through conventional agricultural practices. These will vary as per soil type, crops cultivated, irrigation and other practices.  Any reduction in emissions though improved farming practices will count as credits. Life cycle analysis using mitigation optimisation tools will have to be done not only to measure direct emissions, but also those produced during the production, transportation and application of inputs like fertilisers, pesticides and irrigation.

Agriculture is one of the biggest emitters of GHGs. They emanate from the use of farm machinery, or the cultivation of rice in flooded fields (which release methane, a more potent GHG than CO2). Over-use of urea, which is rampant in India because of a flawed pricing policy, releases nitrous oxides (N₂O, which is worse than methane).

But agriculture is also pivotal for environmental sustainability through the retention of carbon in soil. Studies have shown that 40-60 percent of the carbohydrates that plants produce through photosynthesis are deposited in soil through roots. This is the main source of soil organic carbon, apart from crop residues and manure.

Growing crops without ploughing helps retain carbon in soil for a longer time as the organic matter in micro soil particles is encased in larger clods which microbes cannot easily access. Ploughing exposes the organic matter to the atmosphere and hastens its decomposition, which is quicker in tropical climates. Avoiding tillage has a double benefit, the other being emissions averted from machinery not used for field preparation.

Cover crops like mungbean or cowpea being legumes store nitrogen from the air in root nodules. They don’t use all of them; the unused ones are available for crops grown alongside or subsequently and result in lower use of nitrogen.

(Top photo: One way of sequestering carbon in soil is to plant wheat in a field with retained straw, without ploughing it. Here’s one such field in Ludhiana. Photo by Vivian Fernandes).