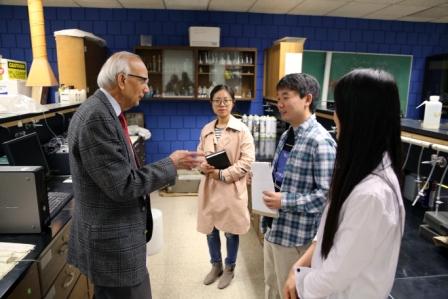 Rattan Lal, a native of India but a citizen of the United States, gets the World Food Prize for work on soil conservation and improvement techniques like no-tillage, cover cropping, mulching and agroforestry that are now widely practiced. In 1987, he showed that atmospheric carbon could be sequestered in soils. This has become an important part of the strategy of slowing down climate change.

Leading soil scientist Rattan Lal was declared the winner of the 2020 World Food Prize award on 12 June for developing and popularising a soil-centred approach to increasing food production that conserves natural resources and mitigates climate change.

From his humble beginnings growing up on a subsistence farm in Karyal in Punjab (now in Pakistan) and a refugee in India, Lal did his B.Sc in agriculture from Punjab Agricultural University, Ludhiana, and M.Sc (soils) from the Indian Agricultural Research Institute, Delhi. He obtained his Ph.D  in soil science from Ohio State University (OSU). Lal’s determination to learn and succeed in school propelled him to become one of the world’s foremost soil scientists. His pioneering research on the restoration of soil health in Africa, Asia and Latin America led to revelations that impacted agricultural yields, natural resource conservation and climate change mitigation. The agricultural practices Lal advocated are now at the heart of efforts to improve agriculture systems in the tropics and globally.

“The unbound joy and excitement of receiving the 2020 World Food Prize reminds me about the gratitude, privilege and honor of working for farmers from around the world,” said Lal, who now serves as Distinguished University Professor of Soil Science and founding Director of the Carbon Management and Sequestration Center at OSU. “Yet, the urgent task of feeding humanity is not fulfilled until each and every person has access to an adequate amount of nutritious food grown on a healthy soil and in a clean environment.”

Lal began his research career at the International Institute of Tropical Agriculture in Nigeria, developing soil health restoration projects across Asia, Africa and Latin America. He explored and transformed techniques such as no-tillage, cover cropping, mulching and agroforestry that protected the soil from the elements, conserved water and returned nutrients, carbon and organic matter to the soil. This in turn improved the long-term sustainability of agroecosystems and minimized the risks to farmers of droughts, floods, and other effects of a changing climate.

In 1987, he returned to OSU, where his research showed how atmospheric carbon can be sequestered in soils. This breakthrough research transformed the way the world saw soils. As a result, soils are now not only the foundation for increasing the quality and quantity of food and preserving natural ecosystems, but an important part of mitigating climate change, as well. Three separate United Nations Climate Change Conferences adopted his strategy of restoring soil health as a means to sequestering carbon. In 2007, he was among those recognized with a Nobel Peace Prize Certificate for his contributions to the Intergovernmental Panel on Climate Change (IPCC) reports, when the IPCC was named co-recipient of the Nobel Prize.

Lal’s innovative research demonstrated how healthy soils are a crucial component of sustainable agricultural intensification – enabling higher crop yields, while requiring less land, agrochemicals, tillage, water and energy. His work has been pivotal in enhancing the productivity and sustainability of global agricultural systems, resulting in improved crop yields and food security, while also saving hundreds of millions of hectares of natural tropical ecosystems.

Lal is a most prolific agricultural scientist with more than 100,000 citations. His models indicate that restoring soil health can lead to multiple benefits by the year 2100, including more than doubling the global annual grain yield to feed the growing world population, while decreasing the land area under grain cultivation by 30 percent and decreasing total fertilizer use by half. Making this a reality will enormously benefit farmers, food consumers and the environment.

(This is an edited version of the article on www.worldfoodprize.org.  The photo is courtesy of the Ohio State University College of Food, Agricultural and  Climate Change Sciences).