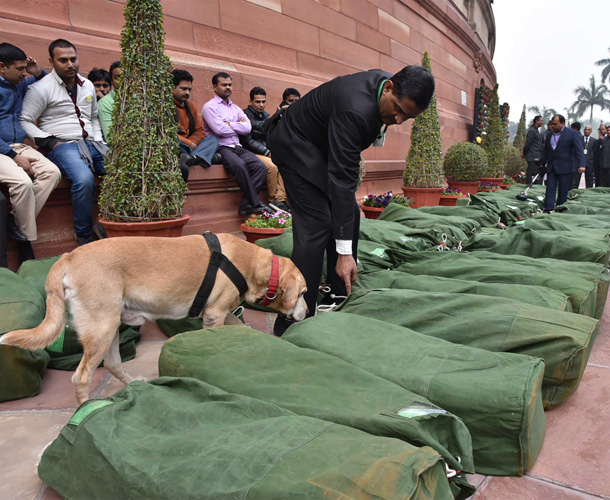 Vivian Fernandes analyses the 2019-20 interim budget, and the giveaways to the farm sector.

Filling in for Finance Minister Arun Jaitley, who is ailing and under medical teatment in the United States, Piyush Goyal said he was presenting an interim budget but tabled a full-fledged one. He announced income tax reliefs and made expenditure commitments for the next financial year without having the people’s mandate to do so beyond May.

Previous election-facing finance ministers heeded propriety and restrained themselves. In his 2014-15 interim budget speech, Finance Minister P. Chidambaram said he would not make changes to tax laws ‘in keeping with convention.”  He left direct taxes untouched, but gave relief on indirect taxes, which governments can do anytime without Parliament’s approval. Chidambaram had also announced a farm loan waiver with an eye on votes – but that was in the previous year’s budget.

Finance Minister Jaswant Singh in his interim budget of 2004-5 also did not tinker with direct taxes. He made certain declarations of intent with a promise to fulfil them if the government were re-elected. On indirect taxes, he had provided relief ─ but two months ahead of the budget. He also did not commit the next government to additional expenditure except for extending the coverage of cheap food to a further 50 lakh very poor families in tribal areas.

Goyal turned the vote on account (as the interim budget should rightly be) into an account for votes, Chidambaram tweeted. He announced a transfer of Rs 6,000 I three instalments nto the bank accounts of each farmer owing two hectares of land or less.  The annual outlay for the scheme was Rs 75,000 cr of which Rs 20,000 cr has been provided in the revised estimates for 2018-19. Economic Affairs Secretary Subhash Chandra Garg said the government was awaiting a further transfer of Rs 28,000 cr as dividend from the Reserve Bank in addition to the receipt of Rs 40,000 cr from it.  Reserve Bank governor Shaktikanta Das is likely to oblige.

Direct income transfers to smallholder farmers as a way of alleviating distress have been recommended by pro-market agricultural economists like Ashok Gulati. They are supposed to be non-trade distorting unlike subsidies on fertiliser which lead to over-use, or of power, which cause groundwater depletion. Telangana pays Rs 4,000 per acre per season under the Rythu Bandhu scheme without any limit on holdings. It has budgeted Rs 12,000 cr for 2018-19.  The scheme should have replaced input subsidies.  But Telangana’s beneficiaries continue to get urea subsidised by the centre. It has also announced a second loan waiver that is likely to cost Rs 24,000 cr on top of Rs 16,124 cr written off in 2017-18.  It is also giving free electricity from this January, disregarding the experience of Punjab where ground water is being drawn at more than the recharge rate in many blocks.

Before the Telangana government embarked on the Rythu Bandhu scheme, its revenue and agriculture department officials fanned out to nearly 11,000 villages and verified about 72 lakh land titles. The central government does not seem to have done any such preparatory work. It will have to take the help of state governments to implement its PM-KISAN scheme, as it is called. Opposition ruled states will try to appropriate the credit, though it is centrally funded entirely.

Goyal’s scheme will exclude many cultivators who lease in land informally. According to official figures only 10 percent of the country’s farm holdings are tenant cultivated, which is a gross understatement. The distress-relieving payments should go to them but do not.

Even land owners who are eligible to the scheme announced by Goyal may not all benefit because land records are not in order and even where property has been partitioned, the mutations may not have taken place.

The distress in rural areas is real. Even if they get remunerative prices, most farmers will not be able to live off their farms, because their holdings are too small. They do not have enough produce to sell after meeting own needs.

Prime Minister Narendra Modi had five years to reform the agricultural economy.  He should have laid the ground for direct income transfers to cultivators so that farm input subsidies could be gradually withdrawn.  He should have got states to pass laws that would have formalised tenancies without the owners fearing loss of title. He should have got the updating of rural land records, which began in the last decade, quickened in mission mode.  He should have secured for farmers the right to sell their produce to any buyer, instead of allowing the hold of commission agents in the regulated mandis to endure.  He should have removed stocking limits and restrictions on agricultural trade. He should have got scientific warehouses constructed across the country and ensured that farmers got loans against warehouse receipts. He should have encouraged contract farming and other modes of aggregation of smallholder farmers.  He should have boosted the construction and export sectors to take people out of agriculture. Instead demonetisation crippled the real estate sector. And ideologically-driven cow vigilantes had damaged the animal-based rural economy.

Modi has taken many initiatives like crop insurance, soil health cards, drip irrigation and electronic trading of farm produce.  But their full promise has not been redeemed because there has been little attention paid to details and to solving problems as they arose.

The fallback on giveaways like enhanced minimum support prices (announced last year) and income transfers are an acknowledgement of the failure to reform agriculture structurally.  Instead of smart and minimal government promised in 2014 we have a sprawling state trying ‘garibi hatao’ the same old way.