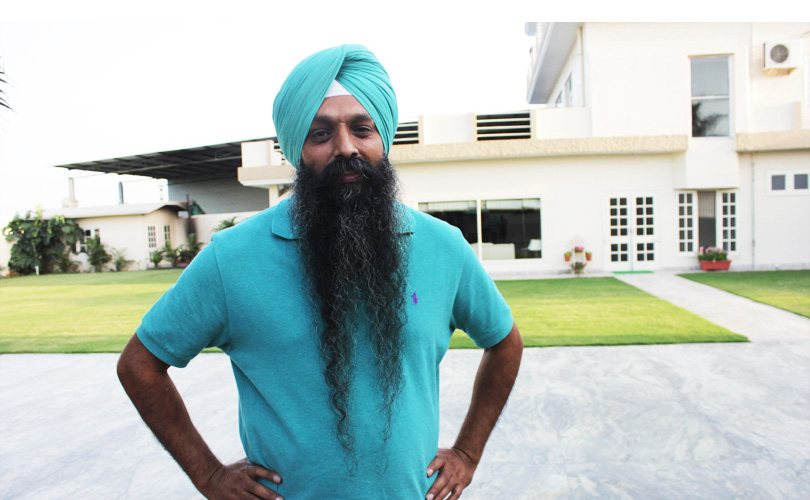 There is a serenity about Pawanjot Singh, 49, which gels with the lush maize fields around his off white-walled single-storey house and the yellow green lawns in the foreground. The ground floor drawing room, with large windows and parquet flooring, has the understated elegance of an upmarket hotel suite. It all spells quiet self-assurance.

For 32 years Singh has been a farmer. He was the youngest in the Jalandhar area when he started, forced by a family tragedy. He cultivates 180 acres, much of it on lease from family and non-family members. Small farmers should have holding capacity, he says. ‘If they are not able to do that they should get out of agriculture as soon as possible because it will not be paying anymore with MSP (minimum support prices) and conventional crops.’

Singh grows certified seed potatoes for the agriculture departments of Odisha, Assam and West Bengal; one of less than half-a-dozen farmers in the area to do so.  His other crop is spring maize. After the maize is harvested in June-July, he prepares the field for potatoes by growing sun hemp, a leguminous plant, which he ploughs into the soil to improve its fertility.

The Punjab government has been trying to get farmers to move out of rice into maize or other crops. By that it means kharif maize grown instead of rice. Singh does not grow rice anymore, but spring maize, a long duration crop and entirely ground water-irrigated, may not do much good either.

Singh got into maize by luck. When he was given corn hybrids of two multinational seed companies to try out in 2003, he told one of them its seeds would not perform in temperatures above 36 degrees centigrade.  That earned him a company-sponsored visit to Pakistan, where he found the corn farmers much advanced. He noted down their practices, sought validation on the Internet, put them down on paper and handed it over to his farm manager to implement before proceeding to the United States on holiday. When he returned he was surprised to get a yield of three tonnes per acre, against 1.5 to 2 tonnes before. (It is now 3.5 tonnes an acre). He then passed on the knowledge to other farmers in the area. There are 30,000 acres under the crop now, he says, a ten-fold increase in as many years.

Following the best practices he has listed over the years, Singh gets the cobs manually de-husked on the plants and leaves them to dry on them for about ten days. The cobs are then plucked, put into nylon mesh bags and stacked. There they remain during the busy monsoons.  Since the corn is attached to shanks, it does not catch fungus, he says. The shelling is done after the rains, by when the moisture level would have come down to 15 percent.

Singh never sells at harvest time when prices dip.  He sold last year’s produce in March for prices 60-80 percent higher at Rs 15 to Rs 16.25 a kg. With MSP one scrapes the floor. Patience can be very rewarding.