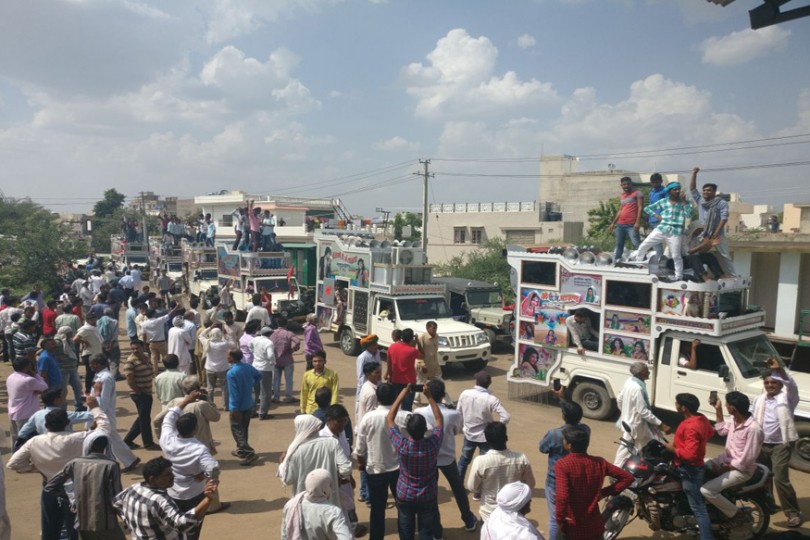 For 13 days, till 13 September, Sikar in Rajasthan came to a complete halt. What is novel about the farmers’s agitation there was the protest against cow vigilantes which had affected the cattle trade and the ability of farmers to sell their animals to relieve financial distress.

They were also protesting the menace of stray animals, because of which they have had to incur additional costs on fencing their fields.  Instead of addressing the root cause, which is the prohibition against culling of non-lactating and non-productive animals, the Rajasthan government  has proposed to give them a grant for fencing.

An Indian Express report by Mohammad Hamza Khan says those participating in the protests cut across vocations: traders, petrol and diesel vendors, insurance agents, the diary union, butchers, employees of the municipal water treatment plant and city bus operators all made common cause.

The farmers had suffered losses owning to deficient rainfall. The area had received the last good monsoons three years ago. Volatile prices had also caused losses.  Moong prices had fallen from Rs 9,000 a quintal to Rs 4,000, that of peanuts had declined from Rs 5,000 in 2015 to about Rs 3,800. Even milk prices had tumbled from Rs 28 a litre t Rs 19.

Interestingly the protests were led by Left parties which do not have a single MLA in the state assembly.

The protests were called off after the state agreed to debt relief.