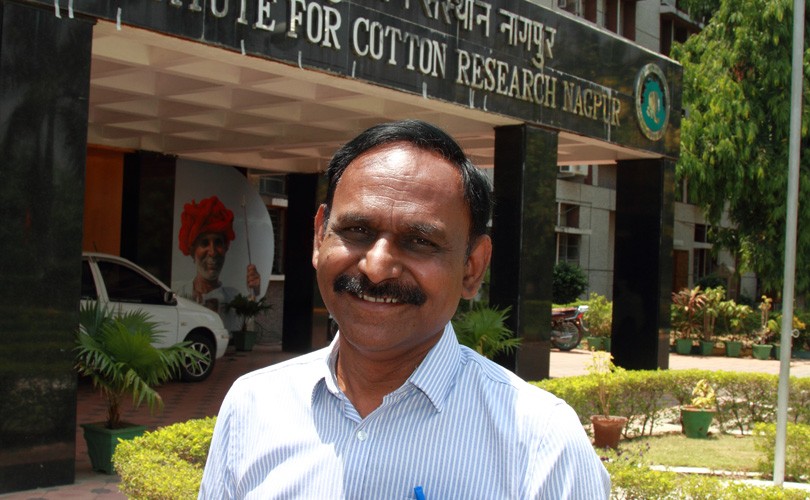 Hardy desi cotton varieties might indeed be a better option than Bt cotton hybrids for rain-fed areas. Farmers should have a platter of choices. Science should have settled the debate. But an exercise that should have been collaborative has become fractious. At the first signs of Bt technology faltering, the agriculture ministry and public sector research institutions are gloating. Indian versus American, national versus multinational, public versus private sector — there are many shades to this debate, reports Vivian Fernandes. This piece was first published in the Financial Express. Also read accompanying report on farmers’ experiences with desi cotton.

The currently fashionable belief that everything (well, almost) that is good and great emerged in ancient India and pathways to the future run through the distant and glorious past extends beyond governance and knowledge structures. The dung and urine of desi  cows is imbued with special properties. Celebrity nutritionists recommend ghee. It is even said to be fat burning. And Keshav Raj  Kranthi, Director of Nagpur’s Central Institute of Cotton Research (CICR) believes the time has come for Indians ‘to wake up and help desi cotton get back its lost kingdom, and through it so shall our brethren regain back our roots to reach the sky.’

There are four species of cotton that are grown worldwide. Two, American and Egyptian, are from the New World, and two others from the old world. They are also known as Asiatic or desi cottons. The latter evolved over millions of years and covered 97 percent of India’s cotton acreage at the time of independence, according to Kranthi.  They are hardy plants. They can grow in saline and water-logged conditions, withstand drought, tolerate pests and resist diseases.  Their yields may not compare with American cotton hybrids, but they leave on the farmer’s table as much or more because of lower cultivation costs.

American cotton is a colonial import. Kranthi says the British introduced varieties from Malta and Mauritius in 1790, after the American War of Independence forced a search for alternative supply sources. The Lancashire and Manchester mills were designed for American cotton of medium staple length and good strength.   They had acclimatized to Indian conditions by the mid-19th century, but the British were unable to persuade Indian farmers to forsake desi cotton.

Indian scientists, Kranthi says, completed the unfinished task after independence. Though calicoes and fine muslin produced from desi cotton were much in demand before British mill-made cloth arrived, Indian plant breeders, regarded it as coarse and inferior because of short staple length. They focused on improving American cotton varieties.

American cotton, not being native to India, is vulnerable to pests, especially American, spotted and pink bollworms. The reliance on hybrids has aggravated this vulnerability. Hybrids have high yield potential and are responsive to chemical fertilizers. But their life has to be extended to make multiple pickings possible, for higher output. This allows bollworms to flourish. The plants were doused with insecticides to kill them, but overtime the worms developed resistance.

The market was ready and waiting for Monsanto’s Bt technology approved for use in 2002. The gene technology enables plants to produce their own bollworm-killing insecticide. Monsanto makes it available only for hybrids, whose seeds farmers must buy year after year. If the seeds are saved for sowing the next season, they lose hybrid vigour. This enables Monsanto to recoup the cost of developing the technology and make a profit. Of the price that farmers paid ─Rs 830 for a packet of 450 grams last year in Maharashtra─ Rs 163 went to Monsanto as trait fee.

The technology has been effective in warding off bollworm attacks on cotton. Ninety-five percent of India’s cotton acreage is Bt cotton. Attracted by higher yields, desi cotton farmers switched. Area under desi cotton shrank from nearly 25 percent before Bt introduction to 3 percent now. The share of hybrids ─ 45 percent then ─ has more than doubled. India is now both American and hybrid cotton country.

But pink bollworm resistance to Bt technology has been seen in some pockets. The matter has been serious enough to engage the attention of seed companies, scientists and the government.  Strategies to contain and reverse the trend have been devised.

But Kranthi believes Bt technology will at best last a few years. Bollworms will eventually render Bollgard II, Monsanto’s two-gene Bt technology currently in wide use, impotent within a few years, just as they did to its predecessor in the last decade. Not everyone is as gloomy. Supporters of the technology believe its life can be extended by stacking more Bt genes and by planting a little non-Bt cotton in Bt cotton fields for bollworms to feed on. But the insects will eventually win.

Kranthi believes the future of India’s cotton economy lies (a) in early-to-medium duration crops because longer the life greater are the chances of insect infestation. (b) High- density planting to make up for the loss of output caused by early termination of the crop. (c) Replacing American cotton with naturally-resilient desi cotton, whose seeds are cheaper too (Rs 200 a kg versus Rs 1,850 for Bt hybrids) and (d) staying away from input-intensive hybrids to minimise cultivation cost.

CICR tried out this strategy last year on 36 farmers and 40 acres in Maharashtra’s rain-fed districts like Akola, Amravati and Wardha through a Nagpur-based NGO. Five of the farmers whom this correspondent met, said yields were slightly less or comparable to those of Bt cotton, but costs were lower because the seeds were cheap, fertiliser use frugal and insecticide application minimal.  Their profits were higher than from Bt cotton, they said. The cost of picking was higher because of smaller and lighter bolls. Since the pickers are paid by the kilogram, they charged a higher rate.  In all 58 quintals of cotton was sold. The price was higher at Rs 5,000 a quintal against Rs 4,200 a quintal for Bt cotton. (The gap will get narrowed as supplies increase). This is absorbent cotton, used in surgical dressings.

But farmers could sell only to the NGO. They wished they had a choice of buyers. The cotton could only be ginned at CICR’s facility in Nagpur. This year, the NGO intends to expand the operation to a thousand farmers and produce about 5,000 quintals of cotton.

CICR is testing 10 varieties of desi cotton at 15 locations across 11 states. These are among the 20 varieties developed over the past seven years. They also include long-staple varieties, with fibre length of 30-32 mm, longer than that of Bt cotton. This should allow desi cotton to be spun into fine cloth. (CICR is also conducting trials of 20 save-and-sow American cotton varieties with Bt genes in them).

The desi vs American cotton contest has nationalist vs multinational, Indian vs western and public sector vs private sector overtones. Kranthi’s back-to-the-roots campaign so his farmer brethren can reach for the sky will require a root and branch change of ingrained practices.  Farmers are deeply invested in Bt technology. For desi cotton to make headway, Bt technology will have to indeed fail.