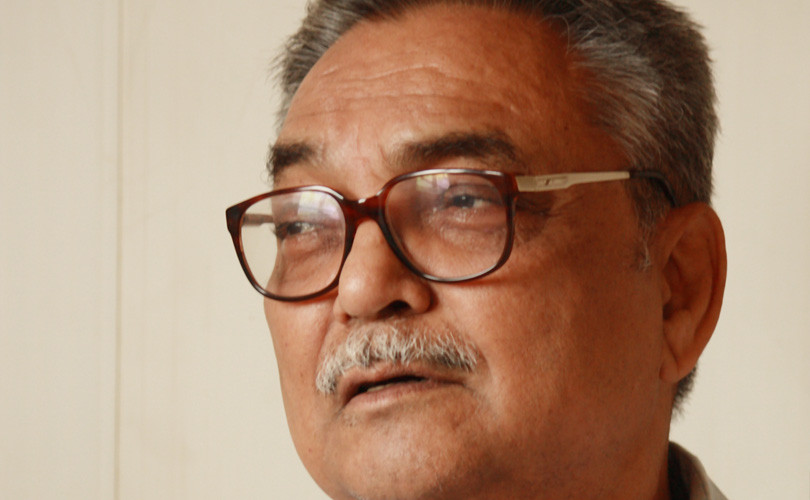 Sharad Joshi, founder of the Shetkari Sanghatana, passed away on Saturday, 12 December, in Pune. He was an original thinker who had the interests of farmers at heart. He will be missed, says Vivian Fernandes, in this salute to him.

In the demise of Sharad Anantrao Joshi, the founder of Shetkari Sanghatana,  India has lost a champion of the free enterprise of farmers,

Joshi passed away on Saturday, 12 December, at the age of 81 at his home in Pune. He was suffering from cancer. Joshi will be given a state funeral on Tuesday.

A post-graduate in commerce from Mumbai’s Sydenham College and lecturer in economics, Joshi believed that Indian farmers were net taxed because of restrictions imposed by the state on the free movement of commodities both within the country and outside through impounding of grains to aid the procurement effort or through export bans, quotas and minimum prices.

In this respect he stood opposite farmer leaders like the scholar-activist M D Nanjundaswamy of the Karnataka Rajya Raitha Sangha, who died in February 2004, and the rustic Mahendra Singh Tikait of Western UP (died 11 May, 2011).  They were opposed to globalisation and free markets and wanted the state to not only hand-hold farmers but carry them in its lap.

After quitting his job at the United Nations at the age of 40, Joshi returned to his village at Chakan near Pune to do farming. He realized that farming was not profitable because artificially-suppressed prices prevented farmers from recovering even their production costs. In 1979 he founded the Shetkari Sanghatana and soon launched an agitation of onion farmers in Nashik, which took a violent turn leading to his arrest.

Agitations for remunerative prices of cane, cotton, rice, tobacco and milk followed. He joined hands with Tikait to set up a non-political coordination committee in 1982.

Acknowledging the role of women in farming, he organized a convention at Chandwad in Nashik 1986 in which two lakh women participated, according to The Free Press Journal. But as a member of the Rajya Sabha (2004-2010), Joshi opposed the women’s reservation bill. He felt they should emancipate on their own and not rely on legislative crutches.

In 1994 Joshi floated the Swatantra Bharat Paksh but did not make any headway. He sought to distinguish between Bharat and India. He was against socialism and moved a bill to delete the term from the Constitution’s Preamble.

The economic reforms of 1992 opened up agricultural markets. They changed the terms of trade in favour of agriculture, but it still remains a sector which has seen the least reforms.

Latterly, Joshi had moved his focus from market prices to issues like water management, which he felt was essential for the sustainability of agriculture. “Even today I remain a strong votary of globalization,’ he told Satish Kamat of Loksatta in an interview on 30 August. ‘Freedom is the most important value and I believe I could convince farmers about that.’

But he was dismayed that farmers organizations were not changing with the times. ‘I find them bereft of vision,’ he told Loksatta. ‘They are mostly copying what I propounded decades ago without checking its relevance in today’s times. It was market price then, but now it is about water management and crop control.’

Joshi was also a votary of technology in agriculture. He saw the potential of genetic modification to enhance yields, combat pests and diseases and make crops resilient to weather stresses. When Indian regulators were shilly-shallying over Bt cotton in the years before 2002, Sanghatana members distributed pirated seeds from Gujarat to farmers in Vidarbha.

Joshi saw caste-based politics as a solvent that dissolved the glue of farmers’ unity. And cooperatives, instead of becoming voluntary and democratic self-help organisations of farmers had become sources of patronage and aggrandizement for politicians, he wrote.

Sharad Joshi did not go with the herd. He stood aloof. He will be missed.

Here is a fine account of Joshi’s life and philosophy by Neeraj Hatekar, Director, Dept of Economics, Mumbai University.

We are keen to hear from you. Kindly post your views on the comments box or send them to smartindianagriculture@gmail.com