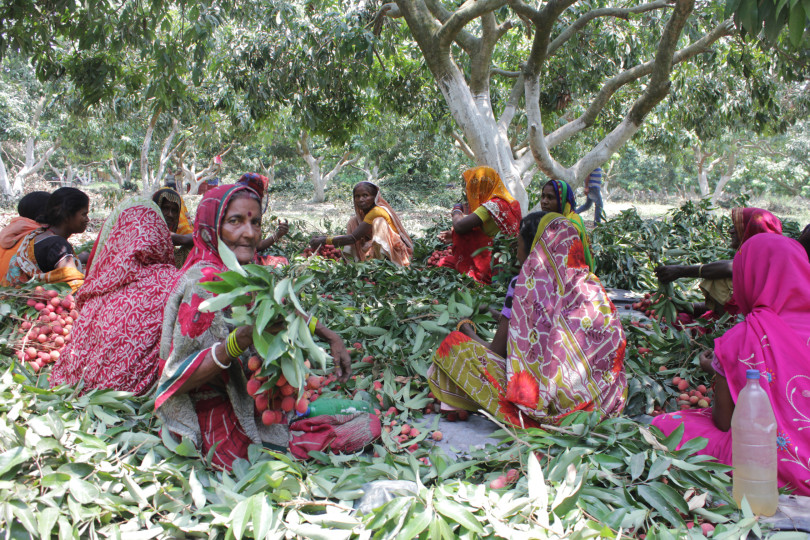 Sundanshu Kumar, 51, is a large farmer in Nayanagar in Bihar’s Samastipur district. A History (Hons) student of Hansraj College, Delhi, he returned to farming in 1988. He became ‘mukhiya’ of the panchayat in 2001 and remains one. Kumar says his grandfather was a zamindar but the family’s land holding is a tenth of what it was. Still, at 250 acres, it is a huge amount of land to own in Bihar where most farmers are small holders. Kumar grows a variety of crops and has a litchi orchard too (pictured above).

Kumar’s father had a seed company called Nayanagar Seed Corp which closed down in 1978 because of labour strife. In its heydays it used to supply seeds to six districts and was in competition to National Seed Corporation and Messina Beej Pvt Ltd. It used to sell double-cross maize hybrids called Ganga Safed 2 and Hi-starch.  Vivian Fernandes met Kumar at his house in Nayanagar in the first week of June 2015, while shooting for a TV series called Smart Agriculture. Excerpts from that interview:

Sudhanshu Kumar at this house in Nayanagar in Samastipur

Bihar has been growing maize for quite some time but productivity has risen of late. What’s the reason?

I think the first reason is seed.  With single-cross hybrids and new varieties there has been a dramatic change in yield. Earlier maize was not profitable. Obviously seed cannot be the only reason but it is the single most important.

Better crop management, irrigation, fertilizer and timely sowing has made a difference. Timely sowing is so important in maize.  If I plant sixty or hundred acres of maize, there is a visual difference in the first thirty or forty acres.

Bihar is lagging on most indicators of progress. But in maize it has done amazingly well in productivity even though most farmers have at best rudimentary education.

Actually for farmers to adopt better technologies they do not need to be learned. It is all what the eye sees. If they see their neighbour getting better results, they will ask him which seed did you get, from where, and they will go get the seed and do exactly the same thing.

Your yields are very high. How do you manage that?

I also tell farmers to not spread their towels at the edge of the fields and take a nap while labourers are planting seed. They have to be behind them to ensure that the soil is mixed well before the seed is placed as soil at the top is dry, that there is a proper opening, the seed is sown at the right depth and the hole is patted closed firmly.

It just needs a bit of monitoring. You see the difference at the time of germination.

Another very important thing is seat treatment. Mice, rats and pigs are attracted to the odour of corn (maize) seeds fermenting. They will avoid them if treated with poison. Treating one acre of maize seed does not even cost ten rupees.

Fourth aspect is timing of irrigation. The thumb rule is first at 45 days when the plant is one-and-a- half foot tall. The second when the last leaves are coming out, so all the nitrogen goes to the cob and not to the plant. The third split doze at the time of tasseling.  Everybody gives three irrigations but are they doing it at the right time?

You will be surprised that yields can increase by five to seven quintals an acre. That is huge.

Now come to the seed. In my village and fifty or hundred villages around, no one uses old seed or seeds saved from the last season. You ask any farmer…you will hear them grumbling about the price of diesel, the price of fertilizer, the price of labour but frankly have you heard anyone say that seeds have become expensive. No, the farmer correlates his produce directly to the seed.

Moving on to another topic, earlier while chatting you said foreign direct investment in retailing may not benefit all farmers, but it will certainly help you.

I have the benefit of insight. I was invited by the US Department of Agriculture (USDA) to visit America for twenty days and study horticulture and cold chain management. I got the opportunity to become a Cochran fellow, that the USDA gives in the name of a senator and you have to do a diploma course in California University and I had done that. The topic was marketing and augmented cold chain systems. They showed us right from start to the finish how when a farmer harvests his peach or orange or apples it never leaves the cold chain. Even at the farmers place they all have mini cold storages. The produce is transported in cold vans or refrigerated vans, they go to the retail place and there it is refrigerated too. But it is huge investment. And I do not see that anywhere in India.  (See missing cold chain story on this site)

I remember sending litchis to Dubai. I put them in an AC vehicle.  But for three-four hours at Kolkata airport they were lying in the heat. So my belief is  what Suzuki did to the automobile industry, FDI in retailing can do for back-end cold chain systems which the farmer needs to sell his produce.  I do not see any government programmes for that. If I want to send a consignment of litchis from Nayanagar all the way to Delhi there is no reefer van. Okay, farmers in general may not benefit from FDI in retailing, but all those farmers who are making quality produce they are going to benefit, their profits are going to increase, and as soon as their profit increases it will have a trickle-down effect right to the poorest farmer. We need this revolution. My feeling is that FDI in retailing is going to be a boon for farmers. I strongly believe that.