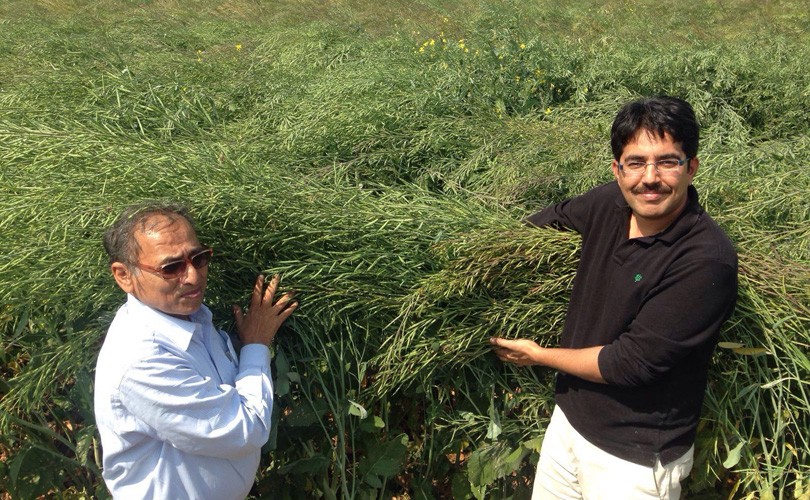 Here is a representation made by the South Asia Biotechnology Centre, Delhi, to the Genetic Engineering Appraisal Committee (GEAC) on August 11 regarding why DMH-11 must be approved for cultivation.

After extensive discussion with the scientific community and key stakeholders, the South Asia Biotechnology Centre (SABC) ─ a registered not-for-profit society ─ is pleased to make the following submission with respect to Barnase-Barstar based mustard hybrid developed by University of Delhi South Campus under the  leadership of Dr. Deepak Pental and the Brassica Group.  We would like to emphasize that it is aimed at crafting an efficient hybrid seed production system in the widely cultivated Indian mustard (Brassica juncea) with funding from the Department of Biotechnology (DBT) of and the National Dairy Development Board (NDDB).

Another species, Brassica napus, popularly known as canola, expressing Barnase-Barstar genes was approved for commercial cultivation in Canada in 1996. There are 26 events of GM canola approved for  cultivation in Canada, USA and Australia. They express single or stacked traits of herbicide tolerance and pollination control required for commercial exploitation of heterosis (hybrid vigour).

Many countries have approved the consumption of GM canola grains, oil cake and oil for food, feed and processing. The importers include Japan, Korea, China, Taiwan, Philippines, New Zealand, European Union, South Africa, Chile and Mexico. India is also one of the major importers and consumers of GM canola oil. It imports about one million tonnes a year.

Madam Chairperson, DMH-11 is a combination of the event bn 3.6 (Varuna Barnase line) and event modbs 2.99 (EH-2 Barstar line) which were selected in RLM 198 and Varuna variety of B. juncea respectively by University of Delhi South Campus. The event bn 3.6 and modbs 2.99 were back-crossed into variety Varuna and east European type mustard line EH-2 respectively, which were further crossed to form hybrid DMH-11 expressing events bn 3.6xmodbs 2.99. We learn that DMH-11 has been tested for bio-safety, efficacy, hybridization, crossability and field performance under the Indian regulatory framework for more than 10 years. It was assessed under multiple trials for field-level performance in collaboration with the Indian Council of Agricultural Research (ICAR) – Directorate of Rapeseed Mustard Research (DRMR) and Brassica research groups at the Indian Agricultural Research Institute (IARI), Delhi and Punjab Agricultural University (PAU), Ludhiana. The biosafety studies including crossability study of DMH-11 with related Brassica species such as B.rapa (toria, yellow sarson, brown sarson), B.nigra, B.oleracea (early types), B.napus, B.carinata, B.touneforti. Eruca sativa and Raphanus sativus were carried out to assess gene flow and its consequences for the environment. We have learnt that multiple field trials were conducted in the mustard-growing states of Rajasthan, Haryana, Uttar Pradesh, Punjab and Delhi.

Madam Chairperson, India faces a huge deficit in edible oil production. It imports 14.5 million tonnes of edible oil including GM soybean oil and GM canola oil.  Annually, India spends about $12 billion on imported edible oil. The edible oil deficit will continue to widen with the increase in population and per capita income. To address this challenge, India needs to increase productivity of oilseed crops. DMH-11 is one of the promising technologies to improve mustard yield in India, which is almost stagnant since the last two decades.

Madam Chairperson, mustard is one of major edible oilseed crops. Of 28 million tonnes of oilseeds produced in 2015-16, mustard contributed 6.8 million tonnes. Its yield hovers around a thousand kg per hectare (half of world’s average) despite improved agronomy, high seed replacement rate and irrigation facilities.  This is despite the release of 96 varieties since the inception of ICAR’s All India Coordinated Research Programme on Rapeseed- Mustard in 1967.  Both public and private sectors have extensively used CMS systems of Ogura and Moricandia arvensis cytoplasm in the production of conventional mustard hybrids. A narrow variability in Brassica juncea germplasm is inadequate in breaking the existing yield ceiling.  Mustard production is severely constrained by multiple factors including white rust, Alternaria blight tolerance, Sclerotinia rot and Orobanche.

CMS, a non-GM method for pollination control, has been used to produce mustard hybrids in India. The CMS-fertility restoration system suffers from low purity, incomplete fertility restoration in hybrids and pollen shedders in the sterile line due to breakdown caused by genetic and environmental reasons. The Barnase-Barstar system is versatile.  It will accelerate the mustard breeding programme in India.

Madam Chairperson, studies conducted in India and earlier research studies in USA, Canada, Australia, Japan and EU have shown that proteins encoded by the Barnase-Barstar genes are neither allergenic nor toxic. DMH-11 does not contain any Barnase or Barstar protein, except that the bar protein is present at very low levels with almost no significance at the field level. Edible oil extracted from GM mustard does not contain any of the three proteins, and therefore it is completely safe for human consumption.

Madam Chairperson, multiple field trials of DMH-11 at different locations demonstrate a yield increase of 28 per cent over the mega variety Varuna and 38 per cent over control varieties. Given high seed replacement rates (SRR) in mustard, around 71 percent at the national level and almost 100 percent in states like Gujarat, the deployment of Barnase-Barstar system will open a new opportunity in improving mustard productivity and production necessary to narrow down the edible oil deficit.

The issue of crossability of GM mustard with conventional mustard or wild relatives has been overstated to stall commercial release. Farmers usually grow F1 hybrid seeds season-after-season and avoid planting F2 seeds. ICAR-DRMR, IARI, PAU, Haryana Agriculture University and National Bureau for Plant Genetic Resources maintain the genetic pool of mustard crop. Once a mustard hybrid possessing Barnase-Barstar technology is accepted by Indian mustard farmers, other hybrids based on it will be available to them.

Herbicide tolerance is not a prime target for DMH-11. Herbicide-tolerant GM canola has been approved for cultivation since 1996, globally. As of 2016, a quarter of global Brassica area is tolerant to multiple herbicides including glyphosate (Roundup Ready) and glufosinate (LibertyLink).  Weeds are one of the major constraints on mustard yields in India. ICAR-DRMR estimates that insects, nematodes, fungi, bacteria, viruses and weeds cause a 45 percent yield loss.  All efforts should be directed at developing mustard tolerant to popular herbicides to allow farmers to increase productivity and production.

DMH-11 does not carry gene(s) imparting Genetic Use Restriction-based Technology (GURT), popularly known as terminator technology. The Indian regulatory system neither allows use of GURT for research nor for developing new plant material for commercial purposes. Efforts should be made to ensure that the general public does not confuse the Barnase-Barstar system of male sterility with terminator technology.

The system of male sterility in one of the parents is a fundamental necessity for efficient hybrid seed production irrespective of methodologies, whether CMS or Barnase-Barstar. SABC strongly recommends that GEAC and the Ministry of Environment should be considerate in evaluating the benefits of this important breeding tool.  We appeal to you to declare Barnase-Barstar technology as safe for environmental release, and approve hybrid DMH-11 for commercial cultivation.

(This letter has been lightly edited for readability)