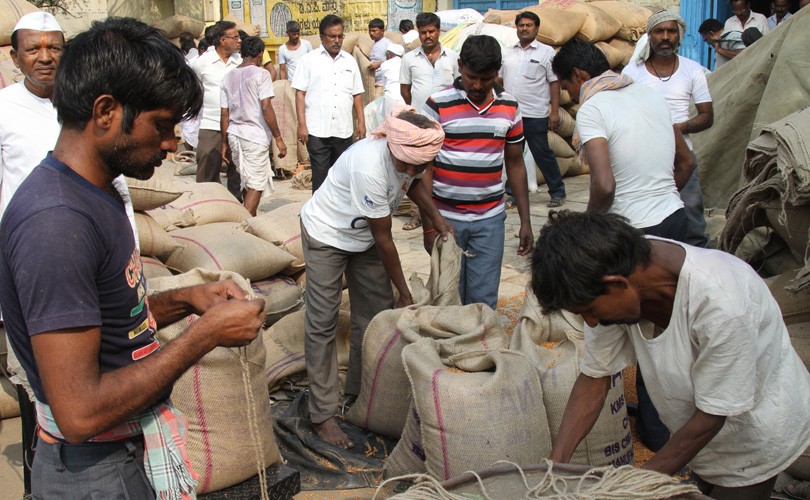 Pigeonpea or tur prices have fallen by half since last year at the Gulbarga and Yadgir mandis. Output has increased because of a good harvest but farmers say they are earning less, reports Vivian Fernandes. This report was first published in the Financial Express on 30 January.

Arrivals of tur or pigeon pea at the Gulbarga (a.k.a Kalaburagi) mandi in North Karnataka speak of a harvest blessed by favourable weather and low incidence of pest and disease attacks unlike a year ago. On 12 January, when this correspondent visited the wholesale market yard, 5,035 quintals arrived versus 3,405 quintals the same day the previous year.

Samples of pigeonpea at Gulbarga mandi. Photo by Vivian Fernandes.

Expanded supply has dampened prices. The weighted average rate in the Gulbarga yard on 12 January was 4,326 a quintal against 9,536 a year ago. At the Yadgir market, about a 100 km away, the price of red tur that day was Rs 4,526 a quintal ─ a drop of more than 50 percent a year ago. Trading at both the markets is electronic, but traders at the Gulbarga market have resisted reforms and moved court. They are not on the state’s unified trading platform unlike Yadgir, where traders from across the state and beyond can bid.

Because of the fall in prices, the action has shifted outside the Gulbarga mandi, where there is brisk procurement by Nafed, a central government agency. The centre has offered to buy pigeonpea at Rs 5,050 a quintal. The state government has thrown in a bonus of Rs 450.

Shivananda Choragati of Gulbarga taluk’s Bhimally village arrived at the procurement centre at 10 pm the previous night to be an early bird. He cultivates on an equal profit-sharing basis with the land owner. He has 48 quintals to sell.

Chandrakanth Biradar Bannur, also of the same taluk has about 40 quintals to offer. He finds rates at the mandi unattractive.

The procurement starts at 6 in the morning and goes on till 8 at night, an official says. The exercise began on 15 December. The bonus was announced around Christmas. But even those who sold before will get it, he assures the throng.

A panel set up in the wake of shooting dal prices last year and headed by Chief Economic Adviser Arvind Subramanian had recommended direct procurement from farmers with a committee of officials ensuring this actually happens. It also advised an MSP of Rs 6,000 per quintal for pigeonpea. The first part of the advice seems to have been heeded, but the procurement price falls short of recommendation. The CEA’s panel has pointed to the “social impact” of pulses, that is, their enrichment of soil with atmospheric nitrogen, and low demand on scarce water, for incentivising cultivation.

The increase in production will not compensate for the fall in prices, says D M Mannur, an agricultural scientist and Project Director at Raichur University’s local agricultural research station.  The average cost of cultivation is Rs 4,800 a quintal, according to his calculation, excluding imputed value of family labour and farm rent. A farmer can make a profit of Rs 600 a quintal with a yield of five quintals an acre, he says.

Arvind Govindrao Ghantoji, says labour costs are eating into profits. He is a lawyer by training, has a household

appliances shop in Gulbarga’s “Supermarket” area, and grows pigeonpea on the side. Workers have to be ferried to farms and dropped off, so an eight-hour day gets reduced to six hours of work, for which Rs 300 each has to be paid.

Inclement weather had crimped output last year, but higher prices had more than compensated. Pigeonpea prices had ranged between Rs 15,700 and Rs 4,600 a quintal in 2015-16 in the Gulbarga mandi, the weighted average price being Rs 9,617. A little over eight lakh quintals had arrived that year.  Arrivals the previous year were nearly 20 lakh quintals forcing the weighted average price to fall to Rs 4,900.

This correspondent had visited the district during July 2015 for a television series on “smart agriculture.” Sharad Tenglikar, a farmer and professor of community medicine, had blamed the grip of commission agents and traders and cartelization among dal processors for farmers losing out in good times and in bad. The agents force farmers to sell to them soon after harvest and repay loans. That is when prices rule low. Dal processors corner stocks, he said, and jack prices up during the lean season.

But Yog Raj,  a partner in Sri Ayyanar Dhall Mills, challenges the narrative. The mill has been operating since 1951. It is the oldest in the area, claims Yograj, whose ancestors migrated from Madurai in Tamil Nadu. Yograj says processing takes eight days during which millers are exposed to price risk. The quality of produce supplied has deteriorated over time because farmers do not care about soil health. Since there is little standardization, experience matters in procurement.  Yograj says his mill buys whole dal with an eye on producing at least 68 percent first grade split dal, which fetches a premium in the state’s Dakshina Kannada district, where there is a ready market for his “peacock” brand. Customer loyalty helps in tiding over difficult times.

Since pulses are susceptible to infestation by bruchids, Mannur suggest that they be stored in metal alloy silos and not traditional cement concrete ones.  Manoj Rajan, Karnataka’s additional secretary for market reforms, and managing director of a company which provides backend support to the state’s electronic commodity markets, plans to set up a network of warehouses closer to farmers than the mandis. Standardized produce will be stored scientifically there, and farmers will be able to use the warehouse receipts to obtain loans from banks. Control over produce should allow farmers to postpone sales and obtain better prices.

(Top photo of procurement of pigeonpea by Nafed on 13 January, 2016 outside Gulbarga wholesale mandi by Vivian Fernandes).