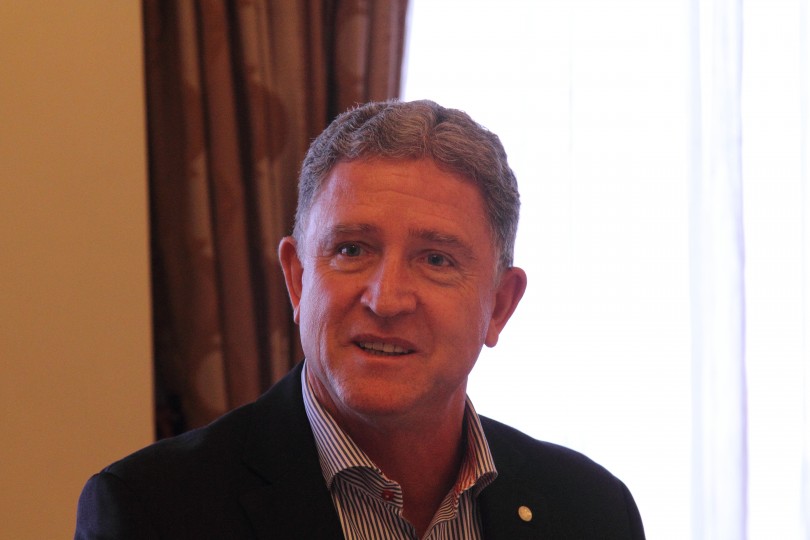 There are substantial benefits in GM mustard says Richard van der Merwe during a conversation with reporters in Delhi on the status of the German company’s merger with the American MNC Monsanto. Vivian Fernandes reports.

There is a role for organic farming, but it is a niche role; it cannot feed 10 billion people, which is the expected size of the global population by 2050. Pitching transgenics as the agricultural technology of the future, Richard van der Merwe, the Vice-Chairman and Managing Director of Bayer CropScience India, said countries like India and those of Africa would have to rely on it because of shrinking arable land owing to urbanization, the pressure on natural resources and uncertainties in weather created by climate change.

“Europe will still take 20 years before they look at GM” or genetic modification which is how transgenics like Bt cotton, naturally toxic to certain pests, are created.  “They are in a lucky situation, they are wealthy,” van der Merwe said. He was referring to the European Union’s opposition to the cultivation of GM crops within its borders which is an example cited by Indian anti-GM activists.  Europeans can be choosy because they have the income to indulge in fads like organic food.

Van der Merwe said much of Africa would go hungry without GM corn. As a South African he has been transgenic GM corn, he said, but “I have not developed horns” referring to fear-mongering and the demonization of GM technology by anti-GM activists.

Bayer has a strong portfolio of fungicides, insecticides and herbicides. It has a small seed business: hybrid rice, cotton, millets (bajra, ragi and jowar), hybrid mustard and vegetable seeds. To obtain regulatory approval it has sold  the off-patent glufosinate herbicide brand Basta along with its production facilities to BASF. This is because Monsanto, the American leader in agricultural biotechnology, which it is acquiring, has a large business in Roundup, its brand for the herbicide glyphosate.

The acquisition of Monsanto will make the combined entity very strong in GM technology. The deal is now before the Competition Commission of India (CCI). Van der Merwe expects it to be approved by May without which the global merger cannot happen.  If the global merger happens without CCI approving the merger in India, it can impose a penalty of 1 percent of turnover or assets of the combined entity, whichever is higher. Bayer CropScience and Monsanto have sought approval for merger in 30 countries of which 14 have approved it, van der Merwe said.

This is a rule that applies to all mergers and is not specific to the Bayer-Monsanto deal. Explaining the rationale, Vinod K Dhall, the first Chairman of CCI said, if the globally merged entities operated as distinct companies in India, it would still be able to influence their pricing, manufacturing and distribution policies by virtue of its control in ways that could impede competition.

Monsanto India has dressed up for CCI approval by shedding its Bt cottonseed business, which had brands like Paras Bramha. But it retains the Bollgard insecticidal Bt traits business which has more than 90 percent share of the Indian market.  But it has an overlap with Bayer in vegetable seeds. Van der Merwe said that should not matter as there are a few hundred seed companies. Commenting on price control on Bt cottonseed and the cap on Bt trait fees, van der Merwe said there was a fine line between regulation and new investment.

Bayer Cropscience sells mustard hybrid seeds in India obtained through conventional breeding. Using GM technology for mustard hybridization had “substantial benefits,” van der Merwe said. Environment Minister Harsh Vardhan has not  approved the GM mustard hybrid DMH-11 for mass cultivation even though GEAC, the regulator, recommended approval last May after determining it was safe to humans, animals and the environment.