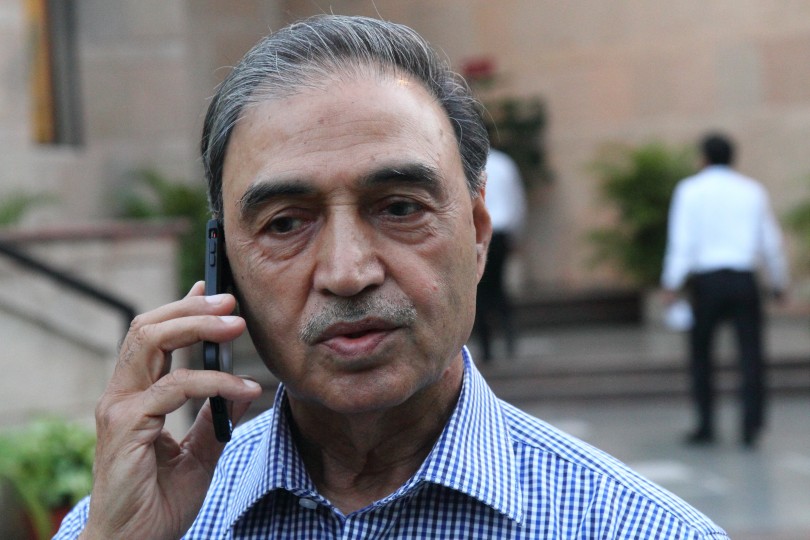 The drive against so-called illegal slaughterhouses is hurting the livelihood of the meat trading Muslim community. The head of the association of the Qureshi sect, which dominates the trade, has offered to run cow shelters so the BJP government will relent.

“The CM was warm. He was kind enough to meet us. He told us categorically that he is not against any trade or business but he will not tolerate any illegality.” This is how Sirajuddin Qureshi, describes their half-hour meeting with Uttar Pradesh Chief Minister Yogi Adityanath on 30 March, 11 days after he was sworn in following the BJP’s massive win in the state elections.

The meeting was about the drive against illegal slaughter houses, which the BJP had vowed to act against in its election manifesto. The catch is that the state government is responsible for the illegality which the chief minister will not brook. True, it has been committed by past governments, of various political hues, including saffron, but the present administration cannot disown the actions or inactions of past ones. All the slaughterhouses that cater to domestic demand in UP, as in other states, are owned and operated by panchayats or municipal governments. Each of UP’s 75 districts has one or more. Qureshi says there are more than 200 of them. He admits they are in a mess. But to punish meat traders, many of whom earn little more than a daily wage, for the failure of slaughterhouses to comply with food safety, animal welfare and pollution control rules and regulations is quite unfair.

“More than 80 percent of business is down” says the soft-spoken Qureshi at his office in Delhi’s India Islamic Centre of which he is president. It is a fine building with a dome lined at the base with lapis lazuli tiles inscribed with Islamic calligraphy. The tiles were imported from Iran. Qureshi seems weighed down. Perhaps, he does not see early resolution of a problem which affects Muslims and non-Muslims alike, but particularly the Qureshi community, which has traditionally engaged in the meat trade. Qureshi is President of the All India Jamiat-ul Quresh.  The association represents a sect which, according to him, has more than 5 crore people across the country. About a third of them are butchers or meat sellers.

At a meeting of the association in Lucknow on 6 April, resolutions were passed calling upon the government to (a) renovate slaughterhouses; (b) give licenses to meat sellers or renew them quickly; and (c) protect transporters of animals from cow vigilantes.

Qureshi even urges the government to allow the community to run cow shelters or goshalas. The Jamiat will protect them, he says. “We will be more faithful and sincere.”  But his suggestion is likely to be met with scepticism, even derision. A government committed to protecting cows might see it as a ploy to secure animals for slaughter.

The government has not defined what constitutes illegality. According to Indian food safety standards, meat is supposed to be transported in refrigerated vans. Shops are supposed to be equipped with deep freezers. They must be airconditioned. Meat must not be displayed openly; it should be kept in glass cabinets.

Currently, carcasses are transported by cycle or autorickshaws and vans from the slaughterhouses. Most animals are not even slaughtered at the municipal facilities, dirty as they are. Goat and sheep are cut at the back of shops or in residential neighbourhoods. Not only do municipal slaughterhouses lack capacity, they are also distant. For small meat sellers, the cost of transporting one or two carcasses from such facilities, is quite uneconomical.

Delhi, for instance, has a mechanized abattoir on the eastern border that caters to city demand. A meat seller at the western end is unlikely to travel across the city if he cannot recover the cost of transportation. The abattoir cost Rs 250 cr, but has a capacity of about 5,000 goats and 500 buffaloes a day. Qureshi says Delhi’s daily demand is for 25,000 goats and 3,000 buffaloes. It is in a sad state because of poor management. The old slaughter house which it replaced, on Idgah Road, in the heart of the city, was quite primitive, but it could do 15,000 goats and 2,000 buffaloes a day.

At the beginning of the decade, the ministry of food processing industry decided to give Rs 5 lakh to each meat shop for modernization. “Nobody came forward,”  says S K Ranjhan, who oversaw this scheme at the Planning Commission. The 82-year-old veterinarian is currently director at Mirha Exports.

In reply to question in the Lok Sabha on 26 April last year, the government said Rs 27 cr had been given as grants for modernization of public slaughterhouses in the previous four years under a scheme of the food processing ministry where the government bears half of the investment per abattoir subject to a cap of Rs 15 cr each. In Andhra Pradesh, six abattoirs availed of the grants; in UP none did.

Qureshi set up a modern abattoir in Aligarh, in the mid-1990s. He claims it was the first of its kind in UP. His export company ─ Hind Agro Industries ─ has suffered a setback; the slaughterhouse is being rented out.

Quresi is keen that slaughterhouses in the country are modernized and meat sold hygienically. But his experience with Chennai Corporation has been less than happy. On 23 March, the Supreme Court directed the corporation to abide by the terms of the agreement and provide land for an effluent treatment plant and lairage for animals. The contract was signed in 2009. Three tenders were called and Qureshi was the sole bidder. The corporation was to provide 11 acres at Perambur but it gave only half on which Qureshi built the slaughterhouse at a cost of Rs 50 cr for 1,000 buffaloes and 2,000 goats in 2010. But he has been unable to operate it because the corporation has not kept to its side of the contact; the local MLA is said to be opposed. Qureshi has claimed Rs 500 cr in damages. He says he has a license to operate it for 22 years. He claims to have lost business worth Rs 4,000 cr already. The Madras High Court had ruled in his favour, but the corporation went in appeal.UP, even the export industry has been affected. The state has 42 abattoirs approved by Apeda, an export promotion agency, and FSSAI, the food standards authority. The facilities are also inspected by importers. Of these 13 have been shut. Even those that are compliant in all respects, have to reckon with murderous cow vigilantes while transporting animals and meat.

The state has not defined what constitutes illegality. Officials order closure even if a few of several compliances are not met. This is rule by law, not rule of law.