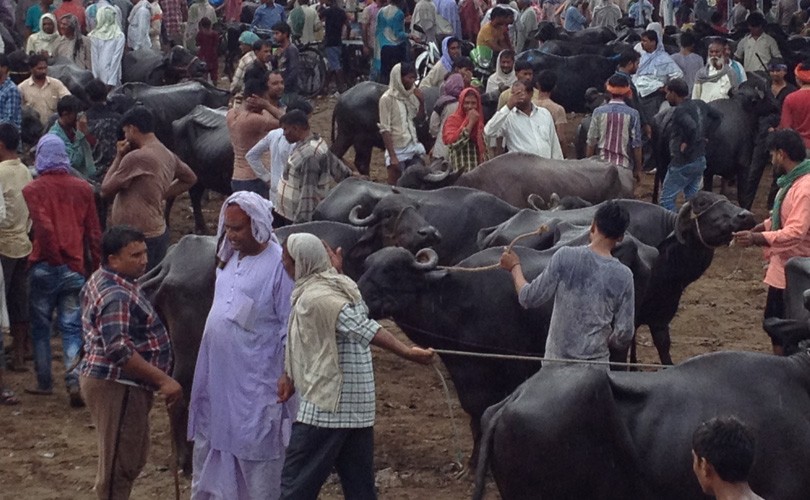 Trading in buffaloes has resumed after the Supreme Court extended to the whole country, the Madras High Court’s stay on new animal market rules that banned trading in cattle for slaughter. But police extortion has increased manifold, reports Vivian Fernandes after visiting an animal market in Mathura.

The pashu penth or animal market at Laxmi Nagar, about 8 km from the Yamuna Expressway on the road to Mathura city is a jumble where everything seems to happen at the same time, with purpose mediating the disorder. Since it is summer, farmers start arriving at 4 in the morning; by 11 a.m about a thousand to 1,500 buffaloes and calves would have been bought and sold. The 15,000 sq m expanse of dirt, dung and plastic litter, surrounded by shops and shacks, comes alive every Saturday. Things seem to have changed little since trading began here in 1935.

Three months after the environment ministry notified rules for animal markets that forbade trading in cattle for slaughter, brisk business has resumed thanks to the Supreme Court extending to the whole country the Madras High Court stay on centre’s notification. For a couple of weeks after the May 23 notification, there was hardly any business at the penth as traders, almost all of them Muslim, turned risk averse. But the transaction costs have risen sharply.

Sandeep Gupta, owner of the market. Photo by Vivian Fernandes.

Sandeep Gupta, whose extended family owns the plot, says members of the Vishwa Hindu Parishad and the Bajrang Dal as well as small-time local journalists did the rounds of his markets for 4-5 weeks after the rules were announced. They would charge Rs 5,000 from each truck driver to guarantee safe passage. The registration numbers of the trucks were passed on to the police at Raya crossing, about 12 km away, he said. But the practice has been stopped after he forbade them from entering the premises.

Raya in Mathura district and Iglas in Aligarh district are two police posts that have become extortion centres, traders say. It is hard to find any trader who has not had to pay. Cattle sold at markets in Kosi, Gowardhan, Oal near Fatehpur Sikri and Nagar in Rajasthan have to pass these posts on way to slaughter in Aligarh or for sale to cattle grazers in eastern Uttar Pradesh and Bihar. “Yesterday, the police took Rs 70,000 for seven trucks loaded with buffaloes,” said Dhaula of Mahavan in Mathura district, when spoken to on 19 August. “If we do not pay they seize the trucks and hand over the cattle to villagers.” Getting the trucks released through the courts takes time. Getting the cattle back is even more difficult. Those given custody of the animals do not return them on various pretexts or demand stiff charges for feeding them in the interim.

“Sometimes I have to pay Rs 1,000, something Rs 2,000,” says Ammu Chaudhary of Raya . “Earlier we did not have to pay.” He has bought 20 buffalo calves which he will sell to grazers in Etah, where after being reared for about two years, they will be sold to dairy farmers.

“Dacoity is happening, our livelihoods have been hit,” says Mohammed Sharif of Iglas tehsil in Aligarh district. “We should be licensed. We are prepared to pay a tax to the government. But no one should harass us,” he says. Sharif buys 1-1.5 year buffalo calves for sale in Barabanki, Hardoi, Faizabad and Sitapur districts. Hindutva activists have been emboldened after Yogi Adityanath took over as chief minister of Uttar Pradesh in March, he says.

Buffalo calves at the Laxmi Nagar cattle market. These will be reared for milk. Photo by Vivian Fernandes.

“The problem was so severe that business fell” after the rules were notified. “Even now it has not recovered. Traders and truck drivers are being harassed,” says Bhaiyya Babu, the Mathura zilla parishad-approved registration officer at the Laxmi Nagar market. He notes down the transactions and hands over passes, which are proof that the cattle have not been stolen but legitimately bought. He charges Rs 100 per animal as market fee.

Farmers and meat consumers ultimately suffer because of the excesses of police and the vigilantes. Jagvir Singh of village Pachavar in Mathura’s Mahavan tehsil sold his lactating buffalo for Rs 24,000. He was getting Rs 28,000 in the village, he said. He had bought it a year ago for Rs 40,000 but has had to sell owing to financial difficulty and rising cost of feed and fodder.

“I have received no complaints regarding cattle trade or police harassment,” said Arvind Malappa Bangari, who took over as collector of Mathura district in April. This is his first posting. Bangari said he meets the public daily and while there are complaints about overloading, no police extortion cases have been brought to his notice.  He suggested speaking to Senior Superintendent of Police Swapnil Mamgain, who agreed to talk but did not take calls.

The environment ministry has said it will amend the rules. The ones that were notified prescribed so many facilities that they would make the markets unviable. For instance, the area has to be covered. Provision has to be made for feed and fodder. The flooring has to be non-slippery. “Bedding” must be provided. There should be separate enclosures for sick and dead animals. There should be onsite facilities for evacuation and disposal of dung and urine.

In addition, elaborate paper trails have to be maintained of the animals brought for trading so that they are not sold for slaughter. The definition of cattle has been extended to buffaloes as well. At the Laxmi Nagar penth most of the adult buffaloes are bought for slaughter.

The notified rules ignore ground reality. At the Laxmi Nagar fair the business is over by noon. No animals are left behind. While toilets should be provided, and provision made for water and fodder, the prescriptions regarding flooring, bedding, roofing, enclosures, ramps and waste treatment are superfluous. All it takes is a few workers to collect the dung and keep the place tidy because these are weekly fairs.

The notified rules were based on the recommendations of a panel headed the Director-General of , Sashastra Seema Bal, the force guarding the India-Nepal border.  (He was given charges because the Supreme Court was hearing a petition against smuggling of cattle to Nepal for animal sacrifices). It had generous inputs from animal rights activists but there was no consultation with farmers, cattle traders and those engaged in the meat industry. Little wonder, the rules are bizarre.

This article was first published in the Financial Express.