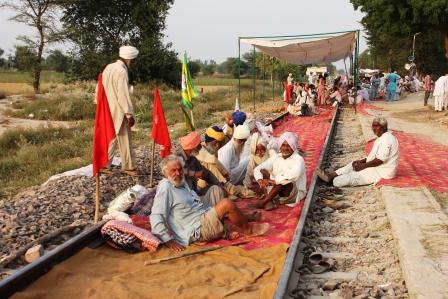 A Punjab farmer leader said at a press conference on Sunday, 29 November, that one of the reasons they were opposing the central farm legislation that allows license- and cess-free trading outside the regulated APMC market yards was to check the “corporatisation” of agriculture. He didn’t mean that companies would replace farmers, but that they would displace the arhatis or commission agents who auction their produce and also step in with loans.

The fear is misplaced because not many agribusiness companies want to deal directly with hundreds of smallholder farmers, reports Vivian Fernandes. They will employ aggregators to handle the logistics of procurement. A commission agent at an APMC  (or regulated) mandi could easily be that person. They have domain knowledge. The regulated market yards where they operate from have facilities for bulk handling. These yards set benchmark prices because they attract many buyers and sellers.

To be competitive in the new environment, the mandis will have to reduce their charges, which is 8.5 percent including commission fee on wheat and ordinary rice in Punjab and 5 percent in Haryana. (States have different rates based on what a commodity can bear). Nine states charge up to two percent.  Other states have rates in between.

Agricultural economist and NITI Aayog member Ramesh Chand who worked on the legislation says if the charges are up to 1.5 percent trades will not shift out of the regulated market yards. They could charge more if buyers value their services. If their charges are competitive – and their membership open – agribusiness companies like ITC might want to be mandi members.

Punjab defends the high charges saying they help recoup or pay for investment in the dense network of regulated market yards and rural roads. But raising the transaction costs is a dampener on the agricultural economy. Instead, Punjab could save revenue for investment in market infrastructure if it stops squandering money on free power, which eats up 22 percent of its tax revenues and is environmentally unsound.

Secondly, the farmers’ leaders should welcome private corporate investment in agriculture and not shun it. They would remember that when PepsiCo was allowed to sell sugared fizzy water in the country, horticultural development for exports was an entry condition imposed on it. The company set up a tomato processing plant in 1989 in Punjab with a state government agency as a partner and procured tomatoes on contract. It introduced new varieties and flew in agronomic experts from abroad. PepsiCo sold the plant eventually but not before tomato puree had become a fixture in Indian kitchens.

In Gujarat, McCain, a Canadian supplier of potato products to McDonald’s buys potatoes for wedges, tikkis, hash browns and French fries from farmers in and around Banaskantha. These are processing quality potatoes that have more solid matter than those used in sabzis, are oblong in shape and do not turn brown upon frying. The company has handheld the farmers in good agricultural practices.  Micro-irrigation has replaced flood irrigation. Advisories on soil moisture management are conveyed via WhatsApp based on information obtained from the company’s weather monitoring stations. Farmers can devote themselves to increasing output on the assurance that they will be paid the price fixed at the time of planting. This is a big comfort. Farmers, who are not on contract or can’t sell their produce to the government at support prices, generally do ‘rear-view’ farming. They grow crops based on last season’s prices which results in boom and bust cycles. McCain’s processing plant at Mehsana also assures its contract farmers that it has skin in the game.

If Maharashtra ranks among the top three states in banana production it’s because of Jalgaon, which contributes 70 percent of the state’s output. And it’s all thanks to Jain Irrigation which introduced a high-yielding variety from Israel in the 1990s. The company supplies tissue-cultured clones to farmers, sells them drip irrigation equipment and gives agronomic advice. It doesn’t buy the fruit but farmers have the vast north Indian market to supply to as Jalgaon is close to Itarsi which is at the cusp of national highways and trunk railway lines.

India’s Bt cotton revolution is entirely private sector driven. The genetically-modified seed has made India an exporter of cotton, from being a net importer. The insecticidal trait in the cotton was developed by Monsanto (now part of Bayer). It has given farmers the confidence to grow cotton without fearing it will be destroyed by bollworms, which used to be a scourge before 2002.

Bihar’s rabi (winter) maize productivity compares with that of the United States. The credit must go to Bayer CropScience and Corteva Agriscience which supply the hybrid seeds that Bihar’s farmers prefer. Getting farmers to adopt new seeds requires more than clever marketing. The seeds have to be demonstrated in farmers’ fields and their purity has to be maintained year after year. This calls for technology stewardship. The maize farmers don’t have regulated markets to sell in. Bihar repealed the law governing regulated markets in the last decade. But producers of feed and starch line up to buy the maize as it comes to the market in the lean season.

Cigarette manufacturer ITC has identified food products as a strategic business to diversify into with profits earned from the sale of cigarettes, which is a sunset activity owing to health risks. It has invested in Sharbati wheat (and related varieties with superior roti-making qualities) in Madhya Pradesh and Rajasthan to meet the requirements of its Aashirwad atta brand. To withstand high-speed winds in southern Rajasthan it got researchers to shorten the height of the plant.

Punjab needs to shift a part of its acreage from wheat and rice to maize, mustard and high-value fruits and vegetables. It should welcome companies that help in crop diversification. The central government cannot continue to buy all the wheat and rice that the state’s farmers produce at minimum support prices. That policy has outlived its shelf-life. The transition should be managed without shocks.