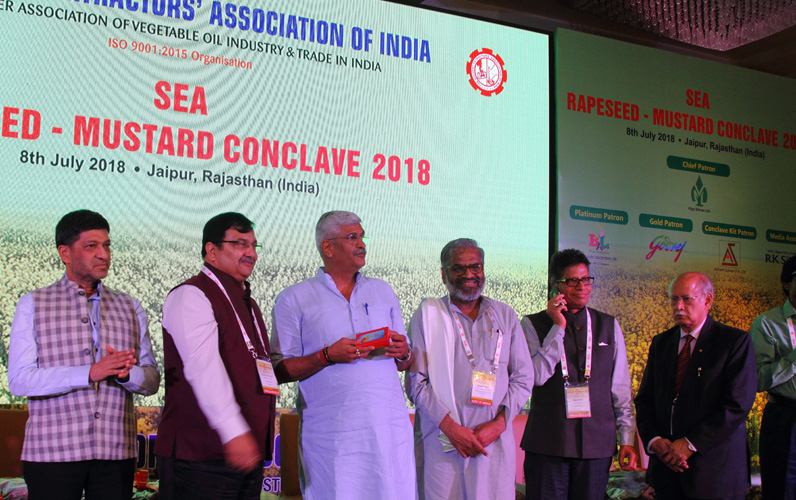 High import duties cannot make mustard production sustainable in the country. Yield will have to rise to bring costs down, and farmers will have to get a bigger share of the price which consumer pay, reports Vivian Fernandes.

The edible oil security of the country will have to pivot on rapeseed and mustard because of their high oil content (37-42 per cent) and preference as a cooking medium across eastern and northern India. With this in mind, the Solvent Extractors’ Association (SEA) of India launched Mission Mustard last year to expand area under the oilseeds quickly from an average of 6.5 million hectares (mha) to 10mha.  It wanted the government to drive the switch from wheat to rapeseed and mustard in Punjab and Haryana. But a year later, Atul Chaturvedi, President of SEA, reported that “we have not been very successful” in convincing the government of the need to start the mustard mission. He was speaking at the second annual conclave on rapeseed-mustard in Jaipur on 8 July.

Persuading the farmers of Punjab and Haryana to make the shift will not be easy. Wheat is a no-worry crop. The government procures the produce at assured prices. Though it fixes support prices for oilseeds, including mustard, very little procurement happens because not all states supply edible oil through the public distribution system, and even those that do, provide a small quantity to beneficiaries who are certified as very poor and that too imported palm oil, which is cheaper.

Chaturvedi, who until retirement last year was CEO of Adani Wilmar, a processor and seller of packaged edible oil, says the government can procure mustard at high prices to “enthuse” wheat farmers in Punjab and Haryana and offload it on the oil industry at a loss. Or it can “jack up” import duties on cooking oil to boost the market rate for oilseeds. Industry can buy the stuff, averting procurement by the government. This, of course, is predicated on the government not wilting under consumer resistance to higher prices.

Apart from price and profit, two other factors might stand in the way of Punjab farmers making the shift to mustard, says Deepak Pental, a geneticist and former vice-chancellor of Delhi University, who has trained most of his research career on the oilseed. In Punjab’s colder areas like Amritsar, mustard becomes susceptible to Alternaria blight. Unless resistance to the leaf disease is created through breeding, farmers will have to spend a packet on pesticides. But P K Rai, Director of the Directorate of Rapeseed-Mustard Research at Bharatpur in Rajasthan, says creating resistance through conventional breeding to the blight will not be easy because India does not have varieties, cultivated or wild, with resistant traits.

The other factor is low productivity. India’s average mustard yield has risen about 70 per cent from 706 kg/ha when the Rajiv Gandhi government launched the Technology Mission on Oilseeds (TMO) in 1986 to 1,193 kg/ha now.

Productivity in Europe at 3.14 tonnes/ha and in Canada at 2.39 tonnes/ha is high. Pental cautions against a strict comparison. Europe’s crop is of nine-month duration. Canada’s is shorter, of 120-days, but is grown in summer under long-day conditions which aid higher yield. These are rapeseed (Brassica napus), which has a higher oil content (42-44 per cent) but also requires more moisture. It is suitable for hilly regions like Himachal but not for dryland areas.

Surinder Sandhu of Punjab Agricultural University (PAU), however, sees canola-quality rapeseed and mustard as winning propositions for farmers in Punjab and adjoining areas of Haryana. Canola, originally a trade name for Canadian oil, low acid, has become a generic term. The acid referred to is erucic, which gives mustard its pungency, a trait traditionally preferred in India, but repellent to those who have not acquired the taste. Sandhu says the canola-quality varieties of rapeseed and mustard (Brassica juncea) which PAU has developed are low in erucic acid (0.5-1 per cent), which can attract non-traditional users. They also have high productivity (1.8-2.3 tonnes/ha) and high oil content (39-41.5 per cent). Since erucic acid is inversely related to healthy oleic acid (loaded in olive oil) consumers may pay a premium, if made aware. Uniquely, for Indian cooking, the PAU varieties have a high smoking point.

According to Sandhu, about 20,000 ha in Punjab are under these varieties. This can go up to 5 lakh hectares. That is a seventh of the state’s wheat area and a tall aspiration.

Another winning factor is that the oil meal of these varieties is low in glucosinolates, which are anti-nutrients that cause iodine deficiency in animals and also affect their reproductive ability. This allows larger quantities of the oil meal to be used in poultry and cattle feed, which should fetch them a better price.

Improvement in quality apart, the industry will have to focus on extracting more rapeseed and mustard per acre. Farmers should not only use good seed but also practice better agronomy. SEA is willing to demonstrate this on pilot mustard farms. It offers as a model its two-year intervention in (non-edible) castor seed, now spilling into the third. It says, the 160 castor seed farmers it adopted in three districts of Gujarat last year reported on average an 80 per cent increase in yield over the business-as-usual farmers. Member-companies who participated in the programme contributed Rs 35 lakh for engaging domain experts, extension agents, external auditors and for free supply of inputs like seed. But for the adoption of these practices on a vast scale, the government will have to step in, in mission mode, says SEA.

Farmers who can afford to give the prescribed irrigations should shift to high-yielding hybrids, says Aravindnath Reddy, Product Manager for Mustard and Millet at Coimbatore’s Rasi Seeds. Of 16,000 tonnes of mustard seed sold annually, about 3,000 tonnes are hybrid, he says. These seeds cannot be saved and sown without loss of hybrid vigour, and must be bought for every season. The yield is around 2.5 tonnes. Private companies, led by Dupont Pioneer, are driving the adoption. But farmers are not getting the best out of hybrids because they cling to old mindsets, says Reddy. For instance, except in Rajasthan (which is the centre for mustard cultivation), line sowing is not widely practised. When fields are packed with plants, there is competition for sunlight and nutrients and they will not perform to potential.

Pental also emphasises the importance of mustard hybrids for increasing yields. Sadly, the hybridization technique which his team at Delhi University has developed has not been approved for commercial release despite GEAC, the regulatory body, making a recommendation in May last year. Environment Minister Harsh Vardhan is not acting on the advice. The Swadeshi Jagran Manch, an affiliate of the Rashtriya Swayamsevak Sangh (RSS), which is a mentor of his party, is opposed to transgenics. Fidelity to party ideology seems to have trumped the national interest.

Sandhu says Pental’s GE technology is a “very stable, very fool-proof pollination control system,” which results in 100 per cent hybrids unlike the CMS system currently being used where about a fifth of the seeds turn out to be sterile, resulting in yield loss. “We should release it. We should put it in the public domain,” she says. PAU had conducted the bio-safety tests on Pental’s transgenic hybrid and found it to be safe for humans, animals, bees and the environment, she says.

“With GM you can breach the yield barrier,” says P K Rai, Director of Bharatpur’s Directorate of Rape-Mustard Research, especially for mustard in Rajasthan, where climatic conditions are not as conducive for higher yields as in Punjab. More than that, GM technology can create glyphosate-tolerant mustard, which can resist Orobanche, a weed that infests about 1 million ha. Pental’s mustard is resistant to glufosinate (branded as Basta!), which is not effective against Orobanche. But glyphosate-resistant mustard has also been developed by researchers in the country.

India consumes about 23 million tonnes of edible oil annually. It imports about 14 million tonnes, most of it cheap palm oil from Malaysia and Indonesia. A hectare of oil palm yields 4-5 tonnes of oil, 5-10 times more than rapeseed or mustard. But oil palm needs about 200 litres of water a day, through the year. India does not have the agro-ecology for it, says Pental. Though state governments are promoting oil palm and support prices for it are diligently fixed every month, smallholder farmers hesitate to commit their land for 30 years to it, says Anupam Barik, Additional Commissioner (Crops). SEA’s efforts to persuade state governments to declare oil palm a plantation crop for companies to cultivate has failed, says B.V. Mehta, its executive director.

Of the four oilseed crops, soybean and rapeseed-mustard hold the best promise for reducing India’s dependence on edible oil imports. Though a larger area is under soybean, its oil production at 1.75 million tonnes is lesser than that of mustard (2.18 million tonnes) because of its lower oil content (17-20 per cent). At 23 million tonnes annual consumption, the edible oil industry has its task cut out.

(Top photo: Solvent Extractors’ Association conclave on rapeseed-mustard in Jaipur on 8 July, 2018. Minister of State for Agriculture Gajendra Singh Shekhawat is in the centre, with Atul Chaturvedi of SEA to his right and Ashok Dalwai, CEO, National Rainfed Area Authority to his right. On the left is Pasha Patel, Chairman, Maharashtra Agriculture Cost & Price Commission. Photo by Vivian Fernandes).