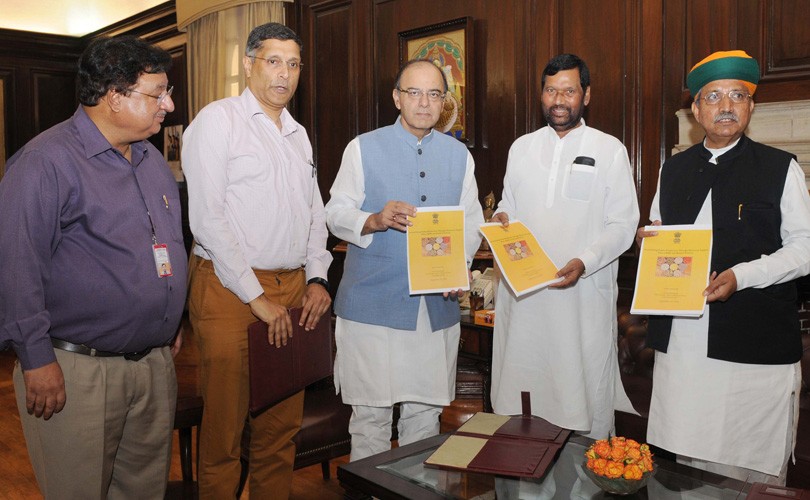 Raising minimum support prices of pulses backed with effective procurement, creating a buffer stock,  abolishing export bans and stocking limits, and openness to genetic engineering technologies are the suggestions made by a committee headed by Chief Economic Adviser, Arvind Subramanian, to bridge shortfalls and curb rising prices of an essential fixture in Indian meals.

The report on ‘Incentivizing Pulses Production through Minimum Support Prices and Related Policies,’ is a response to price spikes in dals in the last two years and a likely slump this year.

The report says India cannot depend on the world market for pulses, as it is itself a major producer.  Curiously, world supplies also tend to wax and wane in line with production in India.  With rising incomes consumption of dals as a source of protein will only increase. This is desirable because the average Indian under-consumes the nutrient as compared to those in countries at a similar level of development.

Though protein can be derived from eggs, meat, poultry and soybean, rough estimates suggest that  pulses are the cheapest sources. The 68th round (July 2011-June 2012) of the National Sample Survey put the cost per kg of protein from pulses between Rs 192 and 290 in urban areas compared to Rs 1,221 for a kg of protein from mutton, Rs 731 from  milk and Rs 437 from eggs and chicken.

Raising domestic production and productivity sustainably is the only way to reduce volatility in the pulses market and safeguard the interests of farmers and consumers, the report says. After two years of short production and high prices, there will be excess production in India and abroad. This is an opportune time to create a buffer stock. ‘Government procurement must be on war footing,’ the report says.

The committee wants procurement to be done opportunistically when prices are low. The rules for disposal of stocks must be clear. Apart from agencies like Food Corporation, Nafed, SFAC and state cooperatives, a new institution in private partnership must be set up to procure competitively, the report says.

Since the government’s credibility with pulses farmers is low, the committee wants a committee of secretaries from the consumer affairs, agriculture and finance ministries, and the principal secretary to the Prime Minister to monitor procurement weekly. Real-time data should be available online, it says, with details of areas from where pulses have been procured.  There must be an effective communications strategy so farmers know the government is serious.

Reviewing the literature, the committee found that shortfalls in production from the trend ranged from 0.8 million tonnes to nearly 2 million tonnes. Averaging these out, it has arrived at a buffer stock target of 2 million tonnes.  It says an additional Rs 10,000 cr must be provided this year for procurement.

The committee has called for a change in the formula for calculating support prices for pulses. These should reflect the environment benefits. Pulses are low in use of water. They enrich the soil with atmospheric nitrogen and consume less urea (hence subsidies) than rice and wheat . They do not contribute to greenhouse gas emissions as the stalks are not burnt like paddy straw in fields after harvesting.  The committee calculates the net advantage of growing tur over paddy at Rs 13,240 a hectare.

Growing pulses is also riskier as they are prone to pest and disease attacks. Based on risk, rewards and social returns, the committee says the MSP of chickpea (chana) should be Rs 40 a kg for rabi 2016 (Rs 34.25 in rabi 2015) and Rs 60 for both urad and tur for kharif 2017 adjusted for inflation.  The MSP for other pulses should be raised according to the same formula.  The MSP of tur should be Rs 70/kg in 2018 (Rs 50.50 in 2016) when short duration kharif tur will be ready for commercialization. To promote cultivation of pulses in irrigated states like Punjab,  farmers should be given Rs 10-15 per kg as cash in their bank accounts.

The committee says annual production of pulses should grow by 8 percent. The current growth rate is 3 percent.  Pulses research, it says, does not get public backing like research in wheat and rice. Indian yields are quite low.

‘A prerequisite for increasing yields in pulses is to clearly signal openness and encouragement to GM technologies,’ the report says.  Breeding in pulses is limited by their narrow genetic base and higher susceptibility to pests and diseases. ‘Hence molecular breeding and GM technology are vital’.  Much of the research is being done by Indian scientists or public institutions. So there is less fear of profiteering.  Pod borer-resistant GM chana and GM tur developed by Assam Agricultural University, Jorhat, and Icrisat, Hyderabad, respectively ‘should be cleared once they are ready for use,’ the report says.

The paper talks about the success of Bt cotton and the need to bring in the next generation of technology. ‘A pre-requisite is to ensure respect for private contracts and prevent de facto or de jure expropriation of property rights.’

The committee disapproves of export bans and taxes.These hurt farmers as they depress prices. They also hurt consumers over time, because low prices result in lower production and price spikes the following season. It says pulses should carry an import duty of 5-10 percent. Currently it is zero. India is allowed to impose up to 30 percent duty on pulses