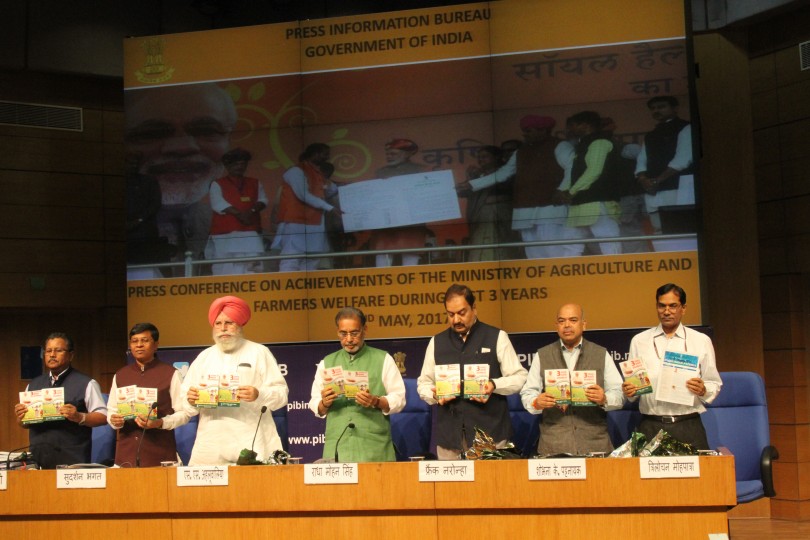 Agriculture minister Radha Mohan Singh was glib at a press conference to announce his ministry’s achievements over the past three years. His words speak louder than his actions, reports Vivian Fernandes.

My job is to increase the productivity, income and profitability of all crops, genetically-modified (GM) or non-genetically-modified, once they are notified. That was Agriculture Minister Radha Mohan Singh’s guarded reply to a question on his stand on GM mustard, which was recommended for commercial release  by the Genetic Engineering Appraisal Committee (GEAC) on 11 May.

But the technology, which has done wonders for India’s cotton economy, did not figure in his 1½ hour long presser on three years of achievements. He did not  mention how the ministry’s price control of GM cottonseed, the reduction in patented Bt cotton trait fees and the moves to deny patentees the right to choose their licensees or the fees they could charge of them, has unnerved the agri-biotechnology industry. Instead, he said the country’s second green revolution would be led by organic farming, and area under it has seen a nearly three-fold increase to 20 million hectares over the past three years.

An interesting aspect of the crop insurance scheme re-launched last year, was not just the low premiums that farmers have to pay and the wider coverage, but the increase in the number of non-loanee farmers from just 77 lakh in the kharif seasons of 2011-14 (when Manmohan Singh was prime minister) to 2.61 cr during 2014-17 (out of 9.47 cr farmers who bought crop insurance)

There were generous comparisons with the United Progressive Alliance (UPA). The National Democratic Alliance of Prime Minister Narendra Modi scored over it in terms of budget spending on the agriculture sector, efficiency in use of urea, a nitrogenous fertilizer, the testing of soil and distribution of soil health cards, the provision of relief for the drought affected, the migration of wholesale regulated mandis to the online platform, the number of farmer producer companies registered, the extension of irrigation and, of course, record grain and pulses production during the year just gone by.

When this correspondent asked him, how record grain production could be reconciled with record payment of crop insurance claims, Singh said he only claimed record numbers for non-loanee farmers covered by the  crop insurance scheme, though his cabinet colleague, Harsimrat Kaur, the Minister of Food Processing Industries had tweeted that crop insurance claims would rise to record levels in 2016-17 crop year ending in June. She was quoting a report in the Financial Express.

When asked whether farmers were complaining about gau rakshak vigilantes and the difficulty they were facing in selling unproductive cattle and buffaloes to butchers, the minister said the income from dung and urine could pay for the upkeep of such animals.

The minister was well-prepared. He reeled out statistics with ease.  But they cannot cover up for many misses. The Shanta Kumar Report of 2014 on reforming the Food Corporation of India and replacing or substantially downsizing the public distribution system with direct transfer of cash to very poor people has not been implemented.

The price stabilization fund has been used to procure a huge quantity of pulses. More pulses were procured in Maharashtra and Gujarat after the deadline for procurement ended on 22 April, through the Market Intervention Scheme. But the government is good at stocking up. How will it dispose of the stocks? Pulses do not keep for long. They get infested with bruchids.  If not sold or given away in time, losses will be incurred.

Against the target of 14 cr soil health cards, 7.25 cr have been distributed. The minister says there are not enough laboratories to do the testing.

Agricultural growth has averaged 1.7 percent during the past three years. The average was lifted by good growth last  year after two years of drought.

The minister is patting himself on the back. Farmers are unlikely to.