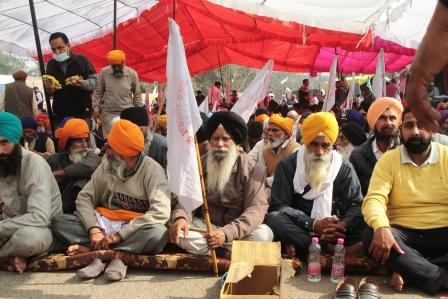 The protesting farmers of Punjab, Haryana and western Uttar Pradesh cannot move out of the rice-wheat cycle even if they wished to because there are no alternatives that are as remunerative as the two crops which are procured at support prices, argues Deepak Pental, geneticist and former Vice-chancellor of Delhi University in an article in the Indian Express.

Pental says wheat and rice are exceptionally high-yielding crops because intensive research has gone into breeding varieties and hybrids that are receptive to fertilizers and water and produce a lot of grain. They are also resistant to pests and pathogens. Maize is high-yielding for the same reasons but is used more as feed for animals, fish and poultry than as food. There is also not enough demand for meat in India because a large number of people just cannot afford to consume it in the quantities that those in the West or in East Asia do.

Oilseeds like mustard, soybean and groundnut are extensively grown. India needs to raise their production because it imports a huge amount of oil. Soybean and groundnut are also legumes and enrich the soil by storing atmospheric nitrogen in their root nodules. But their productivity is low compared to global averages – around 1.1 tonnes per hectare. Of late, millets and sorghum are being pushed for their nutritional qualities but even with protective irrigation, their yield is not comparable to wheat and rice. They have a serious R&D deficit because of which their yields are low. They are also susceptible to pests and pathogens.

The interaction between pests and pathogens and their hosts at the genetic level is known as the ‘great arms race’ in evolutionary biology, Pental writes. Even as the hosts develop defenses, the pests and pathogens try to overcome them through a process of natural selection.

One way to deal with pests and pathogens is to use agrochemicals. Total pesticide consumption worldwide increased from 2.4 million tonnes in 1990 to about 4 million tonnes in 2011. Thereafter, consumption has been flat. This reflects the development of new generation of molecules that are more effective in lesser quantities. But even with these, Pental says, a recent global level study on crop losses in the main food security hotspots for five major crops showed significant losses to pests — on average for wheat 21.5 percent, rice 20 percent, maize 22.5 percent, potato 17.2 percent, and soybean 21.4 percent. Losses in low-yield areas are more as farmers cannot afford the cost of pesticides.

According to Pental, India is one of the lowest users of pesticides. In 2014, comparative use of pesticides in kilograms per hectare in select countries or regions was:  Africa 0.30, India 0.36, EU countries 3.09, China 14.82, and Japan 15.93. A study conducted to estimate the yield losses to weeds between 2003-2014 by the All India Coordinated Research Project on Weed Management revealed losses between 14 and 36 percent, with soybean and groundnut showing the highest losses — more than 30 percent. Estimated yield losses in India due to weeds alone are around Rs 80,000 crore annually.

A more benign method for dealing with pests is through breeding. The Green Revolution technologies were based on the effective use of germplasm and strong phenotypic selections. Astounding developments in molecular biology in the early second half of the 20th century and their translation into recombinant DNA technologies since the 1970s have brought forth unprecedented opportunities for genetic improvement of crops, Pental writes. Since 2000, genomes of all the major crops have been sequenced. More recently, primary germplasm and the wild relatives of the major crops have also been sequenced. The big challenge is in the effective utilisation of the enormous sequence data that is available. India’s efforts in all three areas are half-hearted, Pental writes.  There is currently a virtual paralysis on the use of genetic engineering and gene-editing technologies.

Pental should know. He has developed a genetically-modified mustard hybrid called DMH-11 which got regulatory approval for cultivation in May 2017. Not only is the hybrid high-yielding, Pental’s GM process is more efficient than conventional cytoplasmic male sterility (CMS) for the development of mustard hybrids.

But the government has withheld permission for political reasons.