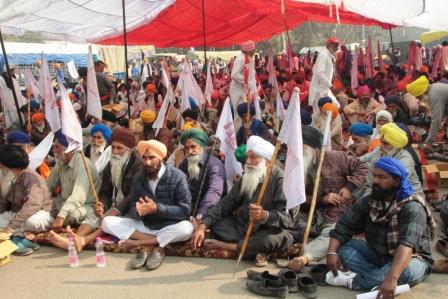 Fear and grievance have impelled droves of farmers in Punjab to lay siege of Delhi, reports Vivian Fernandes. Their suspicion seems to have been aroused by the stealth promulgation of an ordinance on 5 June to liberalise trading in agriculture bypassing state governments. The conversion of the ordinance into an act in September with perfunctory debate has made them paranoid. They don’t buy the central government’s reasoning that the Farmers’ Produce Trade and Commerce (FPTC) Act, 2020 is meant for their welfare.

The FPTC Act allows license-free and cess-free purchase of produce outside the regulated mandis. Previously, any purchase in the ‘notified area’ of a mandi, which could be a block or a district, attracted mandi charges even though mandi infrastructure was not used. Unorganised traders could evade the charges but organised players like say, ITC, could not.

The mandi charges vary across states and commodities. On wheat and rice, Punjab charges three percent each as rural development fee and mandi cess. Commission fee of 2.5 percent is extra. A law to reduce the transaction cost should be welcome. But Punjab farmers are not impressed. They are not affected because the charges are paid by Food Corporation of India (FCI), which procures the cereals for distribution as rations to the poor. Essentially, mandi cesses and levies on procured cereals are a charge on the country’s taxpayers.

FCI has been chafing at the charges. It can procure from outside the mandis to avoid them. They will lose revenue – since wheat and ordinary rice are their mainstay – and might not be able to maintain themselves. The farmers suspect that the law is a ploy to weaken the mandis and hand them over to favoured corporate groups. The mandis can lower their charges and remain relevant. Agricultural economist and NITI Aayog member Ramesh Chand says charges of up to 1.5 percent are justified. In many states that are around this figure. States should regard mandis as essential agricultural marketing infrastructure, he says, and not as sources of revenue.

Punjab says it has few other means to fund rural infrastructure like roads.

Currently, the central government buys all the wheat and rice which Punjab (and Haryana) farmers offer. This is akin to contract farming. The farmers focus on production. They don’t face price risk unlike the producers of 21 other commodities for which minimum support prices (MSP) are declared but procurement doesn’t happen (or happens in a limited amount).

Procurement currently is much more than need. It has to be reduced. This will affect Punjab (and Haryana) farmers. Procurement must also be equitable.  In 2018-19, 80 percent of Haryana’s and 73 percent of Punjab’s wheat production was procured at MSP. Between 2016-17 and 2018-19, 89 percent and 85 percent respectively of Punjab and Haryana’s non-basmati rice output was procured at MSP as compared to 51 percent in Andhra Pradesh and 11 percent in West Bengal, which are mainly rice-eating states.

Punjab farmers believe that the nation owes them a debt of gratitude: their Green Revolution ended the country’s ship-to-mouth existence. Now, when their agriculture is not profitable and they have become indebted, the nation can’t forsake them.

They see procurement as entitlement.

But a 2016-17 survey by Nabard, the agricultural development refinance bank, showed that Punjab’s farming households had the highest monthly income (Rs 23,133). They were also the least indebted (44 percent).  The addiction to procured rice and wheat is harming them. The growth in value of cereals is the lowest as compared to that of horticultural produce, milk, eggs, meat and fish. Between 2012-13 and 2018-19, Punjab’s livestock sector grew annually by 5.40 percent compared to 0.80 percent growth in crops.

The nation’s diet is shifting away from carbohydrates. People are consuming more proteins, and fruits and vegetables. Punjab’s agriculture needs to move in lockstep. It must produce the stuff that the country wants.

The transition has to be managed.

We need an ecosystem approach. The state must stop supplying free power which eats up 22 percent of its tax revenue. It incentivises rice cultivation (and triggers field fires). Power must be properly priced so that groundwater is used judiciously. Farmers must be given income support instead of subsidies that result in wasteful use of inputs and destruction of the environment. The Green Revolution with its emphasis on wheat and rice cultivation has served its purpose. We need agriculture that produces competitively the stuff that the nation and the world demands.

Punjab’s legislature has passed a bill that makes the purchase of wheat and rice at MSP mandatory. It has not become law. It is a flawed piece of legislation. When market prices are lower, traders will not buy as MSP and incur a loss. Maharashtra tried and abandoned it in 2018. Supply and demand determine prices. They can’t be legally mandated.

Only nine percent of Punjab’s farmers are small and marginal (those with less than five acres of land). Across the country, 47 percent fall in this category. They are enterprising too. Open-ended procurement must have a sunset clause. Thereafter, the rice and wheat producing states must be given a quota of supply to the central pool.

Change is painful but is necessary for Punjab’s good. If pain is alleviated the resistance can be managed.