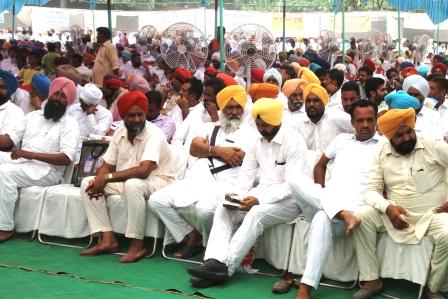 Are Punjab students shunning agricultural research? In the first of two examinations conducted this year (the other is not final) for the post of scientist at the Indian Council of Agricultural Research (ICAR), 179 candidates were selected. Of them, only one was from Punjab.  Among the state agricultural universities (SAUs) that sent the maximum number of selected candidates was the University of Agricultural Sciences (UAS), Bengaluru (14). Tamil Nadu Agricultural University, Coimbatore, GB Pant University of Agriculture and Technology, Pantnagar and CSKHPV Krishi Vishwa Vidyalaya at Palampur in Himachal Pradesh supplied eight each. Five came from UAS, Dharwad.

The candidates from SAUs are most likely to be from that state because local domicile is a requirement for 85 percent of their admissions. To the national institutes, students are admitted on an all-India basis, so it is possible that among the candidates selected from them for ARS some were from Punjab.

Punjab and Haryana do not also figure in the list of top 10 states whose candidates were recommended for selection to ARS between 2006 and 2016. “In the last 10 years there has been no significant representation from Punjab,” says A K Srivastava, Acting Chairman of ASRB. “Punjab students don’t like to go out of Punjab. They feel it is the best,” adds Srivastava, who served for 20 years at Punjab Agricultural University (PAU).  The maximum number of candidates qualifying for ARS during this period were from Tamil Nadu (296), followed by Karnataka (266), Kerala (215) and Rajasthan (208).  West Bengal (187), Bihar (168), Uttar Pradesh (167) and Maharashtra (153) also sent significant numbers.

ASRB recruits all scientists of ICAR. These include nine levels, from entry-level scientist to deputy director- general. It also does the council’s assessments of scientists and their promotions.

The ARS was created in October 1975, two years after the ASRB was set up on the recommendation of a group of ministers headed by Fakhruddin Ali Ahmed, who later became President of India. The first examination was conducted n 1976.

For the state agricultural universities, ASRB conducts the National Eligibility Test (NET) twice a year.  Candidates need to pass the test to be considered for the posts of assistant professors in these universities. There are 75 SAUs and 108 ICAR institutes.

Again, only two of 207 Ph. D students admitted to the Indian Agricultural Research Institute (IARI), Delhi this year were from Punjab. Last year too, out of 204 students admitted to the programme, the same number of candidates came from the state. IARI was the seat of Green Revolution in India and has developed blockbuster basmati rice and wheat varieties that have produced handsome yields and incomes for farmers and export earnings.

A fifth (89) of IARI’s Ph. D students in these two years came from Karnataka. Nearly a tenth (38) were from West Bengal, followed by Tamil Nadu (37).  Uttar Pradesh sent 35 candidates while 32 each came from Orissa and Rajasthan.  Twenty-five Ph. D students were from Kerala while Maharashtra’s contribution was 20.

Baldev Singh Dhillon, PAU’s Vice-Chancellor who was recently awarded the Padma Shri for his work in maize breeding, said,“Punjab students do not want to move out of Punjab. They say, ‘PAU is top-ranked, so why move out?’”

He cited students going to foreign countries for higher studies after B.Sc and M.Sc as another reason.  A third reason was the large number of agricultural graduates recruited by the government in the last two years as agricultural and horticultural development officers. A substantial number of students, mostly from rural backgrounds, prefer to earn rather than learn further.

PAU was set up in 1962 on the model of the land grant agricultural universities of the United States. It had a tie-up with Ohio State University. It also did pioneering work in wheat, rice, cotton, and mustard.

‘The top-ranking are going for studies outside India,” says Navtej Singh Bains, PAU’s Director of Research about the university’s students. They prefer the United States, Australia, and Germany. A few agricultural post-graduates also go to Canada and the United Kingdom for higher studies.

The perception that Punjab students were shunning agricultural sciences was not right, Bains asserted. “The intake of students is much higher now than at any time before,” he said, because of the proliferation of agricultural colleges and universities. Punjab has two of them. PAU is getting more students from other north Indian states for its post-graduate and doctoral programmes, Bains added.

A reason for the low number of Punjab students in IARI’s doctoral programmes, according to Bains, maybe their focus on research rather than on academics. Students from other states were competitively engaged in bagging fellowships, he said.

Interestingly, the discipline with the most number of candidates registering, appearing and qualifying for NET was agricultural biotechnology. The 948 candidates who qualified last year were from 4,829 who appeared for the test and the 6,897 candidates who registered for it. This is a huge waste of money, time, effort and talent because there seems to be no future for them in India. The private sector is reducing its investment in India in agricultural biotechnology research because no genetically-modified crop apart from Bt cotton has been approved for cultivation in India in the past 17 years. There is strong opposition to the technology from across political parties, including the ruling party but this is not reflected in state-funded agbiotech research programmes.

Demand for teaching and research staff in this discipline has been the highest in the 10 years to 2018 as evidenced by the numbers who appeared for the test (26,558) and qualified (3,474).

“Sarak par aana toh [if you want to be on the streets] start a research department in agri-biotechnology,” says S K Rao, Vice-Chancellor of Rajmata Vijaya Raje Scindia Krishi Vishwavidyala in Gwalior.  Rao is a chickpea breeder who is known for his work in setting up a seed production system in Madhya Pradesh while at Jawaharlal Nehru Krishi Vishwa Vidyalaya in Jabalpur. “I discourage my students to opt for biotechnology.”

In food technology of 1,793 candidates who appeared for the test, only two qualified. If the government is serious about food processing to reduce waste, add value and also mop up excess supply in the market (to firm up prices for farmers), pedagogy in this discipline must improve. This can be said of all the disciplines because the share of those qualifying out of those who appeared for the test between 2008 and 2018 has never exceeded a quarter.  It was the lowest in 2012 at 8 percent.  Last year, 17 percent of those who appeared qualified.

The performance of women has been steadily improved over the past years, from 32 percent selected who qualified the National Eligibility Test in 2013 to 49 percent last year.

(Top photo: Punjab farmers at an event organized by Punjab Agricultural University in Bhatinda in September, 2016.  Photo by Vivian Fernandes).