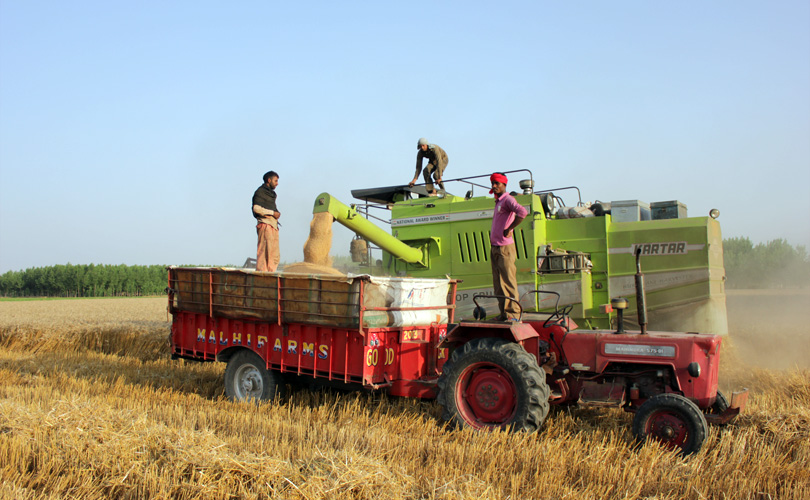 Cotton picking in Punjab is ripe for mechanization and Punjab Agricultural University (PAU) is working with John Deere, the US farm equipment company, to enable it. It has identified cotton varieties that are suitable for machine picking but not recommended any, Jaskarn Singh Mahal, Dean of PAU’s College of Agricultural Engineering and Farm Mechanization tells Vivian Fernandes

Cotton is Punjab’s third most important crop occupying 4.90 lakh ha according to latest official figures. Manual picking costs about Rs 5,000 an acre and labour supply cannot meet bunched-up demand. But mechanization is not as simple as driving a picker through existing crop. The plants have to be re-configured. They should be short and compact with few branches, and flower at the same time. The crop will have to be densely planted to produce the same output from a single picking as farmers get from multiple ones. The space between rows will have to be wider for machine movement. It will take a couple of years, before machine picking, well, picks up.

In Punjab the vast spread of wheat cultivation and the slim window of time available for sowing both wheat and rice have made mechanization of operations imperative. Wheat is grown on 84 percent of the state’s sown area (4.15 m ha). Its coverage makes manual cutting impossible. Paddy (68 percent of sown area) also has to be machine harvested to prepare the fields for subsequent wheat sowing. There is a sliver of two to three weeks, which if adhered to will help the crop keep its date with the ideal bulking time before heat sets in.

from a 2009 law which prohibits the raising of rice nurseries before 1 May or transplanting before the date announced by the government (around 10 June), under pain of destruction at farmers’ expense, to conserve ground water.  The university had started work on a transplanter in 1973 and had demonstrated one in 1989, Mahal said. But it abandoned the project early last decade because the cost ─ Rs 500 an acre ─ did not make is viable in comparison to manual transplanting. The 2009 law caused a spurt in labour demand and rates rose to Rs 3,000 an acre, making mechanical transplanting, currently Rs 700 an acre, a neat alternative.

Mahal admitted that wide ownership of tractors (4.25 lakh) had led to over-capitalization of Punjab’s agriculture. About 40 percent of Punjab’s farm households own tractors and all use one. The machines run for about 350 hours a year on average, against the recommended duration of 1,000 hours. Convenience has overridden economic justification.   Hiring is the best alternative. A number of cooperatives and private hirers have sprung up to hire out machines like combine harvesters which cost between Rs 8 lakh and Rs 15 lakh each. Laser levellers cost Rs 3.5 lakh. Equipment like rotavators (to churn the soil) and seeders are mostly hired.

Competition is acute says Ranjit Singh of Ludhiana district’s Bagga Khord village. His combine harvester operates for about two months a year. It can do both rice and paddy, though farmers prefer to cut basmati crop manually to prevent breakage of the delicate and expensive grains. Gurinder Singh Malli, of Nurpur Bet village, 17 km from Ludhiana city pays Rs 1,100 an acre to cut 13 acres of wheat crop. He will have to spend some more to clear the field of stalks, but it is still cheaper than getting the job done manually for Rs 5,000 an acre.

A little distance away is the office of Nurpur Bet cooperative society. Mahal calls it a ‘case study.’ It has 743 members in six villages owning 4,000 acres. It has invested about half a crore rupees in five tractors, three laser levellers, two threshers and a seeder and power sprayer. Despite hiring these out at a juicy discount to market rates it earned Rs 26 lakh in 2012-13 and has about Rs 2.5 crore in reserves. News report says Ludhiana has 63 such cooperatives, not all of which are well run or profitable. When asked why the society did not have a harvester, secretary Balbir Singh, said cost was not an issue as much as the rectitude of those operating it. There was no knowing whether complaints about mechanical faults were genuine or made up by the operator to avoid a day’s work!

A third of Punjab’s ten lakh holdings are of less than two hectares size. Their share has declined from half in 1991. There is a trend towards leasing. Those who cannot themselves cultivate or engaged in other activities prefer to lease out farms. The rates ─ Rs 30,000 to Rs 50,000 an acre annually ─ are quite steep but farmers have cottoned on to leasing to spread out their fixed costs.

(Photo: A combine harvester in operation on a wheat farm at Nurpur Bet near Ludhiana on 23 April, 2014. Photo by Vivian Fernandes)