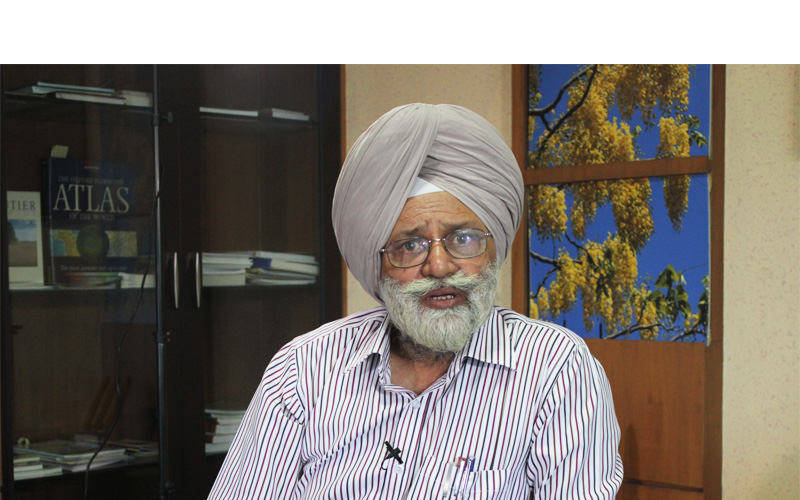 The Ludhiana-based university says it will develop open pollinating varieties of Bt cotton with Prof Deepak Pental’s technology. The seeds will be cheaper, Vice-chancellor Baldev Singh Dhillon told Vivian Fernandes, but he did not say by how much as the seeds are about five years away. This story was first published in the Financial Express (link below) on 28 April, 2015.

Ludhiana-based Punjab Agricultural University may become the first in India to develop genetically-modified open pollinating varieties of cotton whose seeds farmers can reuse, saving them a recurring cost and addressing a major criticism of Bt technology.

Bt cotton is the only GM crop technology approved in India but only hybrids are available. These are under price control and the most used version cannot sell for more than Rs 930 and Rs 1,000 a packet of 450 grams in south and north India respectively. Private companies say they have to recoup investments, but Baldev Singh Dhillon, Vice-chancellor of PAU insists the seeds ‘are very, very costly.’

Deepak Pental, geneticist and former vice-chancellor of Delhi University is scheduled to transfer the gene cassette to PAU later this week. He says his Cry1Ac gene sequence is faithful to the one published by Western scientists twenty years ago. ‘It is different from Monsanto’s gene,’ he said.

(Shortly after publication of this report in the Financial Express, Prof Pental said he was giving transgenic seeds and not a gene construct to PAU. Six years of work had gone into developing them in laboratories and net houses. The Bt gene is shorter than Monsanto’s; there is a six amino acid difference. It is well-characterized in a cotton variety called Coker-310 FR. This line is amenable to genetic transformation as it regenerates in culture very well. Indian lines do not regenerate well. PAU will have to cross the seeds with its best varieties, grow them in field conditions and assess their productivity. If RGCM and GEAC decide that bio-safety trials are required, the introduction of the seeds to farmers will be further delayed. Pental said he would not charge a royalty if PAU supplied the seeds to farmers gratis through agriculture departments. But PAU seems to intend to sell them).

India permitted Bt cottonseeds for commercial cultivation in 2002. These were those of Mahyco Monsanto Biotech, a joint venture of the US multinational which developed the technology, and Maharashtra Hybrid Seed Company, based in Jalna near Aurangabad. So far three Bt genes have been approved: Cry1Ac, Cry2Ab and Cry1C. Currently, these combinations are offered by four companies including Nath Seeds, JK Seeds, and Metahelix, of the Tata group, but the Monsanto subsidiary has over 90 percent market share.

Pental has developed the gene with public money and is keen that the public benefits from it. PAU will incorporate the gene in varieties suitable for north India. Pental also proposes to give it to the Central Institute of Cotton Research (CICR) in Nagpur for splicing in seeds that can thrive in drought-prone Vidarbha and Marathwada regions of Maharashtra.

Dhillon said PAU’s seeds will be cheaper but could not specify by how much as they will be available for sowing in farmers’ fields only after about five years. ‘We will try to take two-and-a-half or three crops in the beginning during varietal development process in one year, then evaluation has to be done for four years,’ Dhillon said.

Since the GM variety is different from that of Monsanto’s the Review Committee for Genetic Manipulation and the Genetic Engineering Appraisal Committee which are housed in two different ministries may insist on bio-safety trials as well, Pental said.

The Bt gene is derived from a soil bacterium and is named after its initials. It is toxic to bollworms which are stealthy and stubborn pests. They used to wreak havoc on cotton crops and drive up the cost of cultivation by requiring as many as twenty-five sprays before Bt cotton was introduced.  The pink and spotted bollworms are hidden feeders, while the American bollworm is partially so.  The volume of insecticides used for bollworm control have declined from 4,470 tonnes in 2002 to 222 tonnes in 2011, K R Kranthi, Director of CICR said in an online publication on Bt cotton. But the amount used for controlling sucking pests has increased from 2,110 tonnes to 6,362 tonnes during this period. (Bt is toxic to bollworms, not to sucking pests).  The saving on bollworm control was more than made up by the increase in costs of controlling sucking pests.  But there has been an increase in cotton productivity because crop is not lost to pest damage, which explains why farmers are drawing to Bt cotton and do not mind paying for the seed. Currently India’s cotton area is 93 percent Bt. India has become the second largest exporter from being a net importer.

Kranthi, attributes the menace of sucking pests to (a) approval of a large number of Bt hybrids – 1,128 by 2012 – most of which are susceptible (b) increase in area under sucking pest-susceptible hybrids and (c) development of resistance to recommended sprays.  The amount spent on cotton pesticides according to Kranthi was Rs 6,863 cr in 2002 and Rs 6,828 in 2011, with spikes in between.

Seeds from any hybrid, whether GM or otherwise, cannot be re-used without loss of vigour. In the advanced countries open pollinating varieties of Bt cotton, whose seeds can be re-sown, are used, an executive with a seed company said. Seed companies there are assured of royalties because of strong protection of intellectual property rights, unlike in India. Hybrids seeds are more productive than open pollinating varieties but yield is also a function of good agronomic practices.

Dhillon said PAU is following a two-pronged approach. It is also developing a Bt version of its cotton hybrid LHH 144. Two years ago it signed a deal with Gujarat State Seed Corporation, which in turn has an understanding with Mahyco Monsanto for incorporation of its gene into PAU’s hybrid.