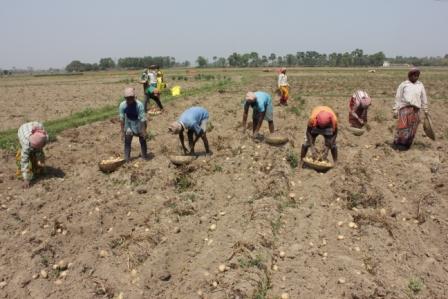 More than half (53 percent) of farmer-respondents in a Mood of the Nation Survey conducted by Lokniti-CSDS  said Prime Minister Narendra Modi had done a poor job of addressing their concerns. But a not-so-insignificant number (41 percent) said the central government had done a good job.

Nearly three farmers in every five (58 percent) reported significant levels of dissatisfaction with the rates they were getting for their produce.  Only 27 percent of farmers said they sold their produce to the government purchase centre; nearly double that percentage – or half of all farmers – said they sold it to middlemen.

Nearly two-thirds of farmers (64 percent) said they would like to leave agriculture if they got a city job. This was slightly higher than 62 percent in the 2013 Indian Farmers’ Survey. However 60 percent this time said they would not want their children to be in agriculture, up from 36 percent in 2013.

(Top photo: Bengal potato pickers, March 2015. By Vivian Fernandes. Potato farmers have been among the worst sufferers on account of crashing prices).