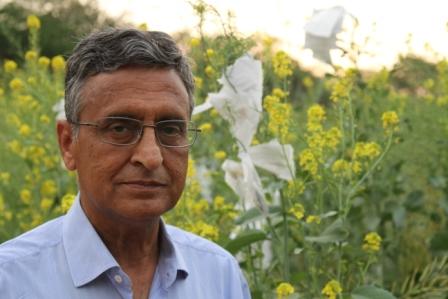 Geneticist and former Vice-Chancellor of Delhi University, Deepak Pental, 67, was given the lifetime achievement award by Mahindra Samriddhi Foundation on 6 March. Pental and his team have developed the transgenic mustard hybrid, DMH-11, which was recommended for mass cultivation by the regulator, but environment minister Harsh Vardhan has sought a review of that decision. Pental is a Ph.D in botany from Rutgers University, New Jersey. He was research fellow at the University of Nottingham in England and returned to India in 1983 to work on mustard because of its high relevance to the country. He began  with The Energy Research Institute (TERI) and moved to Delhi University, where Verghese Kurien of the National Dairy Development Board funded his research on mustard hybrids using both conventional and transgenic technologies.  Pental is CSIR distinguished scientist and continues research in mustard.  Here are excerpts from an interview with Vivian Fernandes. (This was first published in the Financial Express)

VF: It must be disappointing that the work for which you have been awarded cannot be acknowledged by farmers because they are denied the transgenic mustard hybrid you have developed.

DP: There is no doubt about it. The very fact that we picked a crop and kept on working on it for 20-30 years was to make an impact in farmers’ fields. Breeding has been an important component of our work.  Yes, there is huge disappointment that the country is not benefitting from our work. But the work has been published, the stocks have been developed. Anytime, any government feels like utilising it, the material will be there.

What other aspects of mustard has engaged your research attention?

Genetic modification (GM) is best for making mustard hybrids of any two parents. More recently, we have turned to disease resistance. We have developed Indian germplasm lines with white rust resistance. The gene came from East European mustards. That will surely go to the farmers’ fields because it is non-GM. A lot of work is happening on stem rot, a major problem. Alternaria blight affects mustard in hilly areas and cooler climates, so it is not grown as extensively in those regions. We may need GM technologies to tackle these.

You are also improving the quality of mustard oil.

Yes. Mustard has Omega-3 fraction in it (which is good for the heart). But it is pungent. The   pungency comes from glucosinolates which are anti-feedants in meal produced after crushing the seed. We need zero or low-glucosinolate lines like canola rapeseed to feed swine, poultry and cattle. The other thing wrong with mustard is it is 50 percent erucic fraction. This is a long-chain fatty acid which is not absorbed in the gut so well. Oils with high oleic fraction are better. We have made high oleic lines, partly through GM and party through conventional breeding. Hopefully, GM will get accepted one day. Then we can give high oleic mustard to central, southern and western India, and pungent mustard to eastern India. We have also produced recombinant lines between Indian and East European germplasm and Indian and Chinese germplasm. That has given us huge variability to make hybrids.

GEAC, the regulator recommended GM mustard for cultivation last May. Environment minister Harsh Vardhan wants a review. But the GEAC has not met in 10 months. Shouldn’t ministers be accountable? Shouldn’t they be bound to take decisions within a reasonable time and cite reasons for approval or disapproval?

When you don’t like a government committee’s decision it sends a wrong message. There should be ownership. These bodies should meet regularly. People may not like mustard but there may be some other GM issues.

Agriculture minister Radha Mohan Singh wants organic farming to be pursued with as much vigour as the Green Revolution. Green Revolution technologies are seen as damaging to the environment because of overuse of ground water, excessive application of fertilizer and the pollution of air caused by burning paddy stubble.

I completely disagree with this thinking. You can’t go back to pre-1900 agriculture, which was all organic. Green Revolution saved us from political turmoil. It fed people. It was badly required.  The ecological balance has been upset by population increase and overconsumption of resources. We need good agricultural practices to cure excesses. Why is Punjab farmer growing only wheat and rice?  It is because there is no other crop which will bring them so much money. It is lack of new technologies and productivity in legume crops and oilseeds which are making farmers grow wheat-rice in the northern plains, which is absurd.

The solution to overuse of groundwater will come from new technologies. For example, why can’t we grow rice aerobically (that is, direct seeded rice without transplantation and flooding)? It will give the same yield with half the water. We forget that a lot of breeding and technologically-oriented work has gone into crops after the Green Revolution to protect yield gains through disease resistance. You stop doing R&D in agriculture at the international level and you will have famines and death and instability in South Asia.

Is it possible for western industrial-scale scientific agriculture to be gentle on nature?

What is required is precision agriculture. Israel, Germany and the United States practice it. It is not organic. Only one percent of arable land is under organic crops. It is not sustainable. In fact, agriculture research has saved humankind from distress and famines. It is high time science and technology people spoke up for precision agriculture. Why don’t we practice low-till agriculture? In Punjab, Haryana and UP rather than burning we should put crop residue back into soil, that will improve organic matter. That is technology. The solutions will not come from idealistic thinking.

Western governments, NGOs and donor agencies supported the Green Gevolution because they feared persistent hunger would drive countries like India to communism.  According to a paper, “The Political Economy of Biotechnology,” there was an 82 percent increase in crop area planted with modern varieties in Asia between 1966 and 1998. In all 8,000 high yielding varieties of 11 crops were made available to farmers. Now research is being done increasingly by private companies. There is a fear of corporate control on agriculture.

Either we do it ourselves, which I think we are capable of, if we organize ourselves better and have mission mode approach to some major problems like aerobic rice or finding our own genes for disease and insect resistance and  allowing GM technologies indigenously developed which are going to give more income to farmers. You can’t keep on increasing MSPs (minimum support prices). If we want to double farmers’ incomes, 50 percent should come from better economic management and 50 percent from productivity enhancement.

Why are we not getting breakthroughs? We have more than a hundred ICAR institutes and new ones have been inaugurated in Hazaribagh and the Andamans.

Setting up institutions does not guarantee quality work. IARI (Indian Agricultural Research Institute, New Delhi) was a premier wheat-breeding place in the country. Then we set up a centre in Karnal. Why? How does it help? If it had stayed at IARI probably better research would have been done because there are Ph.D students, there is teaching, so the atmosphere is much more vibrant. The maize directorate was at IARI and then was moved to Ludhiana, not to the university but as a separate entity. We keep on creating these entities. In isolation you cannot do great science. It is very collaborative. ICAR should have premier institutes which do pre-breeding and great R&D work and then pass it on to state universities for local adaptation. Instead, we do not know who is doing what. There is a lot of redundancy in the system.

The CGIAR (Consultative Group on International Agricultural Research) institutions are working with Indian governments on their own. The International Rice Research Institute has set up a South Asia regional rice centre in Varanasi. It got Rs 7 cr from the Indian government. ICRISAT is collaborating with the Karnataka government on millets. Is this a trend to be welcomed?

When East and South Asia were facing famine-like conditions the western countries were willing to give money to CG institutions to ward off the threat of extremism or communism. Now they feel countries like India should afford technologies which are developed by transnationals through private money. It is good that India is stepping up support to CG institutions. But we should put our existing institutions in collaboration with them, not create new ones. Small institutions become isolated, their institutional growth stops and they are not able to accomplish as much as a larger organisation is able to do.

What do the CG institutions bring?

There is a great urban bias against these technologies because the urban population does not under agricultural technologies. There has to be better awareness. Some of our senior scientists have not been vociferous probably because environmentalists and the so-called champions of organic agriculture come very hard at you. They make personal attacks. They portray you as doing evil. Scientists not taking a strong stand are not doing a good service to agricultural productivity and the country’s long-run sustainability of agriculture. The best sustainability is if we consume less agrochemicals and build resistance in crops itself. If we do it in the public sector it will reach farmers at a much lower cost.