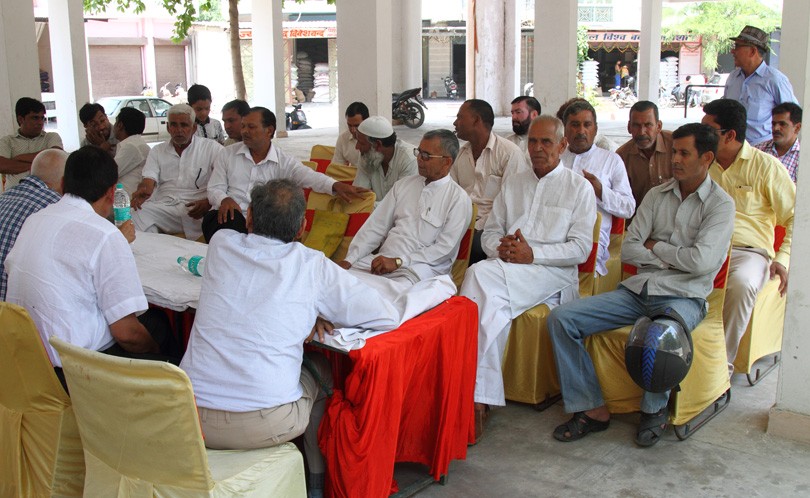 We are in Ghaziabad on a Sunday morning for a meeting with farmers. It has been arranged by Raj Gupta, who, till his retirement last year was looking after the three field stations at Ludhiana, Jabalpur and Samastipur of the Borlaug Institute for South Asia (BISA), a collaboration between the Indian Council of Agricultural Research (ICAR) and CIMMYT, an institute in Mexico where Norman Borlaug who crafted the Green Revolution developed dwarf wheat hybrids.

Gupta is an advocate of conservation agriculture, which for the Indo-Gangetic plains means tilling and laser-levelling the land initially, so water spreads evenly in flood-irrigated fields without collecting wastefully in pools and puddles. No tilling is to do be done thereafter as exposure dries up the overturned soil. Rice is to be directly sown without transplanting. After rice is harvested with combines, wheat is to be sown through the foot-high stubble with seed drills. Leaving stubble to gradually degrade enriches fields with organic carbon. It also obviates burning, a practice that causes widespread atmospheric pollution during winter in northwest India. Microbes and earthworms flourish. The stubble stems evaporation and suppresses weeds. Herbicides will have to be applied to kills weeds that shoot through the stubble cover. After rice, moong is to be grown. The 65-day crop stores atmospheric nitrogen in soil in the form of nodules.

Sushil Tyagi of village Morta on the Delhi-Meerut road says he has been practising no-till agriculture for 17 years. About a dozen farmers have emulated him. While he uses the seed drill to sow wheat in fields with rice stubble, he uses the rotavator to puddle the fields for transplanting rice.

The rotavator is anathema to conservation agriculture. In the process of pulverising the soil it hits the ground at the rate of 540 revolutions per minute, Gupta says. The hard crust that gets formed about half a foot below the surface does not let rainwater to percolate, affecting ground water recharge. It kills earthworms says Shoraj Singh of village Sara, who makes vermicompost for sale.  R K Naresh, professor of agronomy at the state agriculture university in nearby Modipuram says the rotavator is one of the reasons for yields declining, as it makes the soil less water-retentive. Plants cannot access nutrients below the crust. Because rice and wheat roots cannot penetrate the hard crust, they are not well anchored and tend to lodge.

The rotavator is a multi-tasking piece of equipment; it can cut, plough, plane and spread seed and fertilizer. Pradip Singh of village Matiyala says it helps in wheat germination; he casts the seed and runs the machine.  But he admits it can cause long-term damage. “Beauty parlour wali bath go gayi,” he says.

The government gives a subsidy of Rs 35,000 on rotavators. This is Rs 5,000 less than before, says Tyagi, but higher proportionately, as the cost of the machines has fallen by Rs 30,000 to Rs 85,000.  Tyagi, an electronics engineer, assembles laser-levellers with critical components like sensors imported from Japan.  While demand for them has been largely met in Punjab and Haryana, new markets have emerged in UP, Madhya Pradesh, Gujarat and Bihar. Farmers use the rotavator first and then plane the fields with the laser-leveller.

small. Paddy is hand-harvested. The stubble left behind is short unlike in combine harvested fields where it is about a foot high. With less organic matter, yields can decrease in three-four years under no-till agriculture.

The seed drills require high-horsepower tractors which small farmers cannot afford. Their availability at hiring centres is not assured during the narrow three-week window in October-November when wheat is sown. An issue that emerges upon some probing is that social relations have frayed in this part of the country due to political mobilization along communal lines. Farmers do not venture into fields before sunrise; they also do not engage with those they do not know.

Naresh says the contraction in forest land has forced nilgai into fields. Why can’t they be declared as vermin and culled? Naresh says governments do not wish to risk political backlash, as nilgai are regarded as part of the cow family.  Shoraj Singh suggests a semantic solution: rename them as neelghoda (blue horse). Considering the distance they can leap, they rightly belong to the equine family. He finds little bovine about them.

(This piece was first published in the Financial Express

(Top photo of farmers at a mandi in Ghaziabad on 11 June, 2017 by Vivian Fernandes)