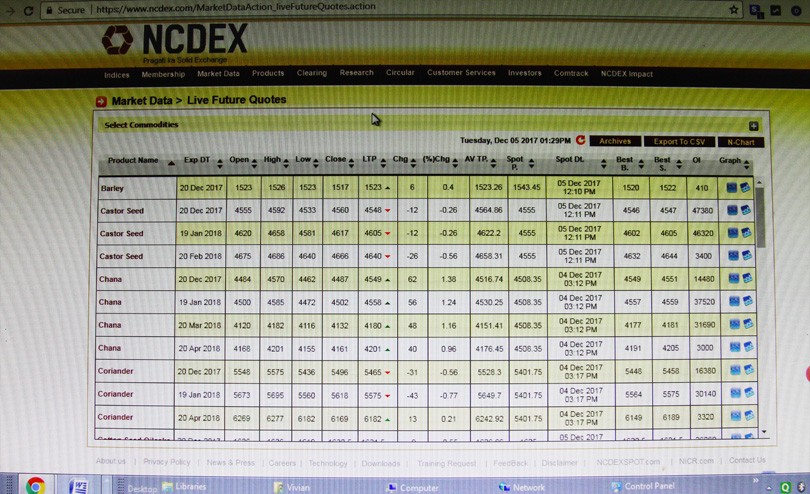 Prices of most kharif crops have crashed below their support prices. This is because of rear-view farming, or planting decisions made on the basis of last year’s prices rather than those expected at the time of harvest, say agricultural economist Ashok Gulati and his research associate Tripta Chatterjee in the Financial Express.

They say that agri-commodity futures can provide these expected price signals but they have had a chequered history in India.  They were allowed by Prime Minister Atal Behari Vajpayee’s government in 2003 and flourished till the global food crisis of 2007-08, when they ran into rough weather. They were revived thereafter and peaked in 2011-12. Since then there has been heavy-handed government intervention in the form of stocking limits and very high margin requirements: 100 percent for potato in August 2014, 95 percent for chana in June 2016 and 70 percent for sugar in September 2016.

The authors cite the Chinese experience. China launched agri-commodity futures in 1993, struggled with them for a decade, invited foreign experts as from the Chicago Board of Trade and has seen them thriving. In 2015, China had one billion contracts compared to India’s 20 million.

Based on China’s experience and Indian sensitivities, the authors say it might be wise to revive agri-commodity futures by initially staying away from staples like rice wheat, pulses and even sugar and allow them in less sensitive commodities like oilseeds, oilmeal, edible oil, basmati rice and spices till the regulators gain confidence.

They suggest that state trading entities like MMTC and STC should trade on the agri-futures platform so that the government gets adequate information.

The say that there should be delivery-based till volumes increase and the markets deepen so that the risk of rigging is hugely minimized. “Once again, this is a lesson which we can learn from China where all agri-commodities traded in Dalian Commodity Exchange are physical delivery based,” they say.

In their view both the regulator and the commodity exchange must work hand-in-hand for the greater good of all participants, including farmers. “Can the Modi government take bold decisions to revise the legacy of the Vajpayee government and scale new heights in agri-futures, say, 200 million contracts by 2022?” they ask.