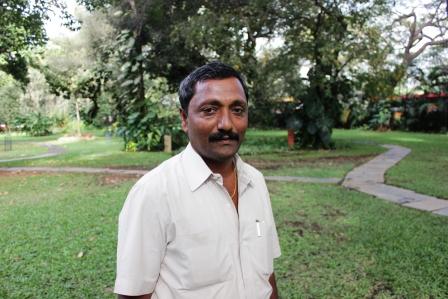 F Basavaraj Rudagi, 48, did not grow cotton before 2008. This farmer from Saundhi village in Dharwad district’s Kundogol taluk made a partial switch to Bt cotton as chilly was susceptible to pest attack and yield was declining. From five acres in 2009, Rudagi had fifteen of a forty acre joint farm under cotton this year, when smartindianagriculture  caught up with him in February. He tried out Bayer in a change from Mahyco and Raasi seed.

Rudagi says he got 11.5 quintals (100 kg) an acre from his rain-fed crop and at Rs 4,050 a quintal, his realization was a little over Rs 46,000. The cost, he says, is Rs 26,000 an acre, excluding rental earnings had he leased out the land. This does not mesh with the profit he claims he makes, but then he admits to not keeping crop-wise accounts.

Rudagi also grows peanuts, coriander, gram, safflower and jowar. There is safety in diversity. And yes he plants pigeon pea or tur around the cotton crop for bollworms to feed on so they are not forced by the survival instinct to develop resistance to Bt protein.  In this sense he is quite a cut apart. Low cotton prices are worrying but what is the alternative?